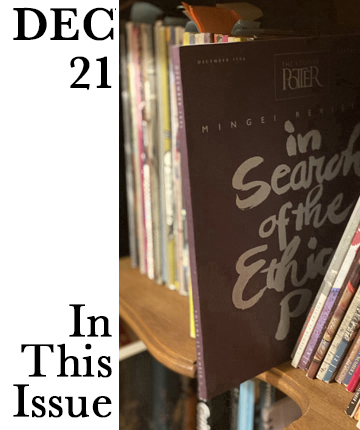 2021 is closing with fifty-two stories added to the archives of Studio Potter. We all (a presumptive generalization, but understand the expression “we all” to acknowledge the intense energy emanating from the human collective that is our niche corner of craft) ­– so, we all – began the year with (what would you call it?) a desperate mix of optimism, suspicion, deep fatigue, and doubtful hope? A backdrop that left many questioning their motivations for working in the arts, clay in particular, and questioning how said work was being executed. Danielle Carelock’s January 2021 article Before I Can Talk About Clay concluded with this thought, “Although 2020 was a challenging year that exhausted us all, 2021 needs to be the year that we move forward to create impactful change. The changes that we need – the anti-racist ideals that we should all strive to embody – require deliberate action, attentiveness, courage, discomfort, conflict, and ultimately a release and restructuring of power.” And she gifted us with an endnote section full of resources to support the conversations we were struggling through.

How did we, the collective we, do? If we’re honest, this paradigm shift has been, like all paradigm shifts, messy and incomplete. Thomas Kuhn was the American philosopher who introduced the phrase paradigm shift in 1962 in his work The Structure of Scientific Revolutions. Kuhn was looking at the way science progresses, and he asserted that science couldn’t progress until those working in science agreed upon some basics ­– a paradigm. Of course, there are always instances, events, or happenings that fall outside of any agreed upon paradigm. These are anomalies. When anomalies, or “inexplicable events,” pile up to create a critical mass this is what Kuhn referred to as a crisis. Crisis precedes a paradigm shift. In science, such crises led to the acceptance of the theory of relativity and the shift from the Ptolemaic system, where humanity believed the earth was at the center of the universe, to the Copernican system, where humanity believed the sun was at the center of the universe. The most important detail about paradigm shifts might be this, “when a paradigm shift occurs, in some sense the world changes. Or to put it another way, scientists working under different paradigms are studying different worlds.”

We are entering 2022 and the paradigm is still shifting; that means we are not all operating in the same world – not that we ever were. We still have much work to do to pull ourselves out of painfully familiar ruts, systems, and behaviors. But fifty-two stories later, I see the desire to learn and evolve in our collective attempts to introduce a new paradigm, even through our failures. We are ceramic artists; we know that growth means we must fail. It’s part of the process. Failure is inherent to learning and change.

In Conversation with Nicole Seisler FREE!

In discussing this article pitch with Studio Potter board member Bhat, I said, “This sounds like a digital version of the Black Mountain School.” Seisler is challenging the standing educational paradigm and Bhat writes, “I see all of Seisler’s works (whether it's her artwork or the programming she creates for A-B Projects) as a way of exploring the language of clay, investigating our personal relationship to this material, and its ability to connect us to others in the community.”

From the Journal of an Apprentice

Studio Potter has always been a champion of the apprenticeship model and Herrera’s journal entries take us inside the evolution of a non-linear journey. “Being an apprentice has humbled me in understanding again what is to be a beginner, what it feels like to not know everything, to make mistakes and to learn from them. I see the apprenticeship is teaching me lessons that are helping me become a better human being.”

Their Stories Were Written in Clay

During the 1940s Gadsden County was home to sixty-seven Coca-Cola millionaires, and a $100,000,000 shade tobacco industry. With a deep history of racial and agricultural inequality, ensuing decades would leave Gadsden County as one of the poorest in the state and the only county in Florida with an African American majority population. Diaz and Hanessian interviewed elderly farmers who lived the Jim Crow experience firsthand but were relentless in continuing their agricultural traditions to capture a snapshot of the current moment and a timely reflection on a community still wresting itself free from its past.

A delicious review of Wearing’s recent exhibition with images that may leave you longing for an escape to a brooding coastline, Bell expounds on his work, “Vessels made heavy by encrusted layers of gritted slip, balance like monoliths en pointe, defying gravity. Yet there is no question of teetering. They hold themselves, as the title implies, in perfect equilibrium.”

Happy Holidays dear readers. However you may celebrate, I wish you steady wisdom, brave heart, and open spirit as you move into your own new paradigm in 2022.

Be well and thanks for reading, 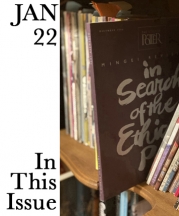 Here we are again, sitting pretty at the top of another annum. A new year blesses us with a definitive moment to look back and assess, making note of the lessons behind us before stepping forward to break ground. This issue of Studio Potter was inspired by a conversation from our membership... Read More