Mark Pharis during his interview with Ben Carter.

An excerpt of an interview by Ben Carter, transcribed by Heather Wang and edited by Elenor Wilson.

I interviewed Mark Pharis in his home outside River Falls, Wisconsin, in the spring of 2015. I was in the area visiting artists connected with the St. Croix Valley Potters Tour, of which he has been a regular participant for many years. Known for his striking geometric vessels, Pharis has developed a system for slab-building soft forms using templates and computer-aided drafting. In this excerpt, we talk about his transition to hand-building and the need to understand the role of “inside hand” in creating volume in a form. In addition to his studio practice, Pharis is an art professor at the University of Minnesota, where he has been teaching since 1985. --Ben Carter

Ben Carter: Would you talk about why you started to hand-build, in terms of developing an individual voice?

Mark Pharis: I had been making some teapots and covered jars that were altered on the wheel, and then I shaved them completely so that there wasn’t a throwing mark on the outside. Once I started to make those a little bit larger, I thought, “There’s no evidence of throwing here, visually, except on the inside.” They weren’t pots that were about insides. They were pots that were all about outsides and form, not necessarily decoration or surface or painting.

I very gradually started to work with slabs and tried to figure out a way of measuring and holding form. That led to making things with patterns or using patterns as a means of making shape and volume.

BC: Can you describe, very basically, those early processes of working with a flat pattern, then animating the object around a volume?

MP: I had been throwing some – if you look at them from the top – diamond-shaped vases. They were two-sided, wider and flatter than they were deep. I made one quarter of that shape into a pattern that, if I had four of those, could make this volumetric, diamond-shaped vase. I had the thrown objects already, so it was a matter of just figuring out how to make a flat shape that would make the volumetric shape. 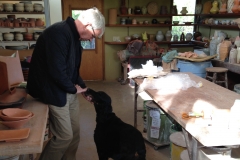