Cross section of a sample "Green Wall" tile developed by Kaufmann in collaboration with researchers at University for Engineering, Architecture, and Landscape Architecture (HEPIA), Geneva, Switzerland, 2008.

An excerpt of an interview by Ben Carter, transcribed by Heather Wang, and edited by Elenor Wilson.

I sat down with French artist Jacques Kauffman during the 2015 Australian Ceramic Triannale in Canberra, Australia. During his keynote speech at the conference, he spoke about his sculptural work, which uses ceramic bricks to form large-scale architectural installations. In this excerpt, we talk about his philosophy of making and his role in developing bioactive architecture that reduces greenhouse gases in urban environments. Jacques recently retired from being the head of ceramics at the Ecole d’arts Appliqués in Vevey, Switzerland and is currently the president of the International Academy of Ceramics. --Ben Carter

Ben Carter: Let’s talk about the research wall that you showed during your keynote speech, out of which some grass, or greenery, was growing. Where was the very first wall located?

Jacques Kaufmann: Well, I know many countries are trying to develop this kind of technology, and the one I know in France is in Quai Branly at the Musée de l’Homme in Paris. In fact the technique we developed with the university in Geneva was developed against this kind of wall, because these walls look green, look ecological, but they are not. Why? First, they eat a lot of water, and they need a lot of maintenance. And then, you have a lot of plants growing, including trees. You don’t want to have trees, big trees, growing on your façade, you know?

A group of researchers in the university in Geneva, asked, What can we do to develop not only the face, a green face, but more deeply ecological walls, in order to cool the city when the city becomes too hot, to prevent using too much electricity to cool the city from inside the apartments, and so on. 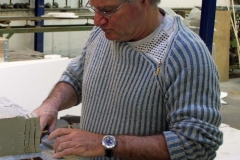 In 1988, Jacques Kaufmann opened his current studio near Geneva, in France. From 1995 on, he has taught at the Ecole d‘arts appliqués of Vevey, and was made chair of the ceramics department in 1996. Since 1999, his activities in China have allowed him to contribute to exhibition exchanges in Europe and China. In 2008, Kaufmann joined a group at Hepia, the University for Engineering, Architecture, and Landscape Architecture in Geneva, to conduct research on "green" walls at city scale. Currently, he is the residing President of the International Academy of Ceramics.