I originally ran across the poem, The Kiln, in a book about Greek pottery, and I had to laugh. What’s the saying, "The more things change the more they stay the same."?  One of the aspects of pottery I love is a connection to the past and being part of something larger than just an individual person.

Essentially, the poem is a kind of curse against potters who choose to practice their craft in a less than virtuous manner (here’s looking at you shirtless and gratuitous cleavage throwers of Instagram). In all seriousness, which potter can’t relate to the highest highs and lowest lows when opening the kiln and believe just a tiny bit that there is something else at play – something, a little like magic. 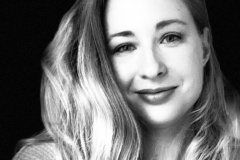 Zuzka is a dual citizen of the United States and Slovakia, but grew up in Germany where, as a very young child, she took art lessons from a Czech painter. She painted throughout her childhood covering desks with crayon marks and finding hidden areas under furniture to draw on. These markings were not readily discovered as her family moved her from Germany, to and through Florida, Minnesota, and Texas.

Eventually, Zuzka decided to pursue her development as an artist in the Far East after she received her BFA.  She lived in Phnom Penh, Cambodia, for two years working as a part-time English teacher and full-time painter before beginning her graduate school studies.

In 2008, Zuzka received her MFA from The University of Georgia and has since exhibited her work in New York, California, Cambodia, Germany, Austria, and across the US. Zuzka held her first solo exhibition entitled "Thirst" in Atlanta through Poem 88 Gallery in 2015.

Most recently, her ceramic work was published in Uppercase’s Encyclopedia of Inspiration in the "Ceramics: Profiles of Potters" and she will have a solo show at the National Czech and Slovak Museum in 2023.

Zuzka’s works are also in numerous public and private collections, including the permanent collections at the High Museum of Art and the Central Library in Atlanta.

Richard Nickel is an artist, educator, writer, and member of the Studio Potter advisory board. He has exhibited both nationally and internationally. He has been published in several books on contemporary ceramics and in art journals. As a designer, Nickel has created posters for Crafted Indie Arts and Crafts Market, a cover illustration for Studio Potter, ceramic awards for Skutt Kilns, illustrations for Alt Daily, and animations for WHRO HealthBeat. As a ceramic sculptor, he has pieces in numerous private collections. Nickel has designed and painted murals in Rochester, New York; Niagara Falls, New York; Norfolk, Virginia; and Virginia Beach, Virginia.