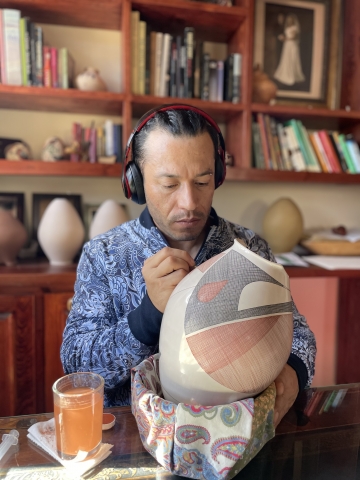 Diego Valles was born in the Mexican border town of Palomas, Chihuahua, in July 1982, but he lived in Santa Rosa until he was twelve. His parents decided to move to Mata Ortiz in 1994 so he and his younger brother could further their studies. By then Valles had already made his first ollas, back when he was nine-years-old. In Mata Ortiz he just had to walk around his neighbors' and friends’ homes, where families were making vessels, to start learning pottery, specifically with the Mora Tena family.
Valles graduated from middle school in Mata Ortiz and from high school in Colonia Juarez, a Mormon town ten miles from Mata Ortiz. After that, he enrolled in electromechanical engineering at the Tecnológico Superior de Nuevo Casas Grandes and obtained his degree in 2005. He graduated with honors and studied for a year at the University of Technology, Sydney, Australia, as part of the Peace Scholarship Program, sponsored by the International Development Program Australia and the Public Education Secretariat in Mexico.
In 2006 he was invited to be part of the exhibition project Mata Ortiz: A Forty-Year Phenomenon organized by the American Museum of Ceramic Art in Pomona, California, and decided to devote his time completely to clay. Ever since, Valles has been expanding the limits not only of Mata Ortiz Ceramics, but also of traditional Mexican ceramics. In 2010 he was awarded The National Youth Award for Arts, which is Mexico’s highest honor to a young living artist, “for the combination of science, art, and excellence in the creation of his ceramics...” 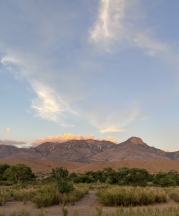 History and Story of Mata Ortiz Ceramics: Why Oral Tradition Matters (Part I)
Over the course of fifty years Mata Ortiz Pottery became an outstanding artistic movement and one of the most relevant ceramic expressions in the world. But how did such a young pottery tradition emerge, seemingly from nowhere, and quickly evolve? The most popular narrative, the “single story” distilled from a larger, more complex narrative, involves only a few men. What follows is our history, the multi-layered narrative, as told by the people who have lived it.
Read More