Ashwini Bhat’s Millstone I, 2015, in front of the stonewall rebuilt by Dr. Robert French by the Slocum river, Westport, Massachusetts. Stoneware, 26 in. diameter. Photo by author.

On several occasions, people have asked me if making art is an isolating activity. Personally, I’m drawn to the quiet and solitude of studio work. The cooperative and social nature of wood-firing gives me plenty of access to community. Still, over the years, artistic restlessness has spurred me to collaborate with artists in other mediums. Such collaborations have increased my appreciation of the suppleness of clay and its capacity as a medium for binding different genres of art and types of artists together and for making connections between varying perceptions of world and the feelings associated with them. At the same time, these collaborations have provoked new trajectories for my ceramic art. I document here three recent artistic collaborations—completed and ongoing.

My early career as a dancer has, no doubt, influenced my sensibility as a ceramic artist. But my studies of literature have also shaped my mind’s eye. When I read the short prose poems of Italo Calvino’s Invisible Cities, in which Marco Polo describes fifty-five fabulous magical cities to Kubla Khan, I envisioned those cities so clearly that now, years later, after I’ve traveled to numerous countries and seen dozens of foreign cities myself, I’m not always sure whether an image I remember corresponds to a real city or a fictional one, a city I saw or one my imagination was teased to invent. 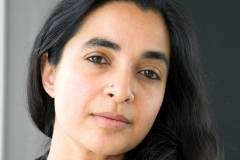 Ashwini Bhat, an artist born in southern India, currently lives and works in the Bay Area, California. She holds a MA in literature and had an earlier career in classical Indian dance. Bhat’s work explores the entangled relationship between the human and non-human, between the constructed and the inherent. Her sculpture has been widely reviewed and featured in Brooklyn Rail (USA), Lana Turner (USA), Riot Material (USA), Ceramic Art and Perception (USA/Australia), Ceramics Ireland (Ireland), New Ceramics (Germany), Caliban (USA), Crafts Arts International (Australia), Studio Potter (USA), Log Book (Ireland), and Ceramics Monthly (USA). Bhat was awarded a McKnight Artist Residency for Ceramic Artists for 2021 and was a recipient of Howard Foundation Award in 2014. She is the guest curator for the 77th Scripps Annual, Ruth Chandler Williamson Gallery, Claremont, CA, 2022.