An interview with Warren MacKenzie on August 11, 1990, at Deer Isle, Maine, conducted recorded and edited by Gerry Williams.

Bernard Leach stood and looked as we showed him samples of our pottery and photographs of our work we had brought to promote our request for apprenticeships at his St. Ives pottery in Cornwall, England. For a long time he said nothing. Finally, he straightened up and said, "I'm sorry, we're all filled up." My wife Alix and I had saved enough money to travel to Europe during the summer of 1949. We had read Leach's A Potter's Book, and knew that we desperately needed apprenticeship training. We had written to Leach and told him we were coming, to ask if we could discuss apprenticeships with him.

We secured a room in town and told Bernard we would be in St. Ives for two weeks. Did he mind if we visited the pottery to learn from observation? He said, "No, that was quite all right." So we walked up the hill to the pottery every day and hung around and asked questions. Toward the end of the two weeks, they fired the large oil-burning kiln in use at that time. Leach was still sitting a kiln watch during these firings, and his watch came on between one to four in the morning. He said to us, "Do you want to come up and talk on this last day you will be here?" We answered, "That would be wonderful, we appreciate that."

We caught a quick nap and at midnight trudged up the hill to the pottery, where we sat and talked with Bernard. We talked until eight in the morning about the state of the world, about politics, economics, social issues, history. In the end Bernard said, “Well, I've changed my mind. We're all filled up now, but you can come back a year hence and become apprentices."

We were disappointed at his initial rejection. We had thought we were passable as prospective apprentices, but much later realized that his first judgment was made on the basis of our work, and the second was made on the basis of personal contact. He was looking for someone who could fit into the pottery group, adapt to its strange circumstances, and who might have concerns for larger interests.

Alix and I returned to the United States for a year of teaching, but, by the spring of 1950, Leach had himself come here to tour around the country doing a series of workshops and bringing an exhibition of his work. At one of his stops, he spent a week at St. Paul, Minnesota, and we made arrangements to go back to England on the same boat with him in June. This was before air travel was common. 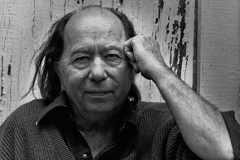 Gerry was the founding director and first editor of Studio Potter. His wife, Julie, was its founding business manager. Together, they traveled, interviewed, wrote, and lectured about issues concerning potters throughout the United States and abroad. Read more about them and the history of SP here.