Value, Vanity, and Reflections of Us: An Exhibition Review of Luster + Light at the Ceramics Research Center

I don’t know everything that art is, but I have spent much time reflecting on the subject. The deep end is where I thrive – creativity, my springboard. A well-curated exhibition can facilitate a whole-is-greater-than-the-sum-of-its-parts experience, making the exhibition a singular art object. Such is the case with Luster + Light. I attended the opening reception last year at Arizona State University’s Ceramics Research Center and have been contemplating it since.

Luster + Light, on display through January 2023, is curated by Sarah Kelly, Windgate Curator of Contemporary Craft and Design Fellow at ASU Art Museum. The exhibition was also made possible by the sustained efforts of Mary-Beth Buesgen, curator of the permanent collection and archives at the CRC.

There’s a lot to the display. Luster + Light deserves more than a summary. But I will say this: I appreciate the focus on the visual. All too often I find theory to be a crutch leaned on by poor aesthetic choices, especially in higher education. Kelly’s thoughtful object choice and placement brazenly push through any need for word and explanation, leaving those explanations for later, after the initial awe of the show crashes into one’s reality. The curator’s choice to highlight objects with gold, bronze, silver, or other reflective surfaces that suggest opulence, instantly transports the viewer and grounds them in ideas of wealth, privilege, culture, and otherness that are intrinsically connected to both artistic creation and the privileged classes that artists often serve.

This [artists] examines works that feature specific lustrous materials to relay cultural or social symbols, often to call attention to abuses of wealth and authority … Curated primarily from the ASU Art Museum’s permanent collections, the [curator] encourages reflection on museums as systems of power and cultural production. How have they upheld hierarchical systems, such as those evidenced by their collections and exhibition histories? Visitors are asked to engage by reflecting on what they value in their own lives.[1]

Most important for me was considering how the gold and amber hues of the artwork demonstrate humanity’s historically consistent obsession with commercialism against the earthen palette of the city in which it resides: Phoenix, Arizona. 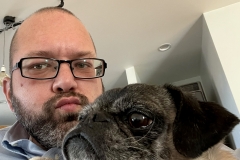 I am an artist and critic living in Phoenix, Arizona. I enjoy good art when it finds me and bad art the rest of the time. I am obsessed with soda firing, glaze chemistry, and the long, complicated history of porcelain. I have lived, worked, and shown in several of these great United States, including being a studio artist for some time at Northern Clay Center in Minneapolis.

I believe humans are deeply creative beings who are all too often separated from this essential element of life for many reasons. Likewise, I believe all criticism, well-intentioned or not, is a reflection of the author as much as it is the work. Thus, I hope you find mine thoughtful, fair, insightful, and timely.

Right now I avoid social media at all costs, but please feel free to email me anytime [klofkorn (at) gmail (dot) com] to discuss art, life, or whatever.