In discussions of social reform, there is a point at which words can no longer educate listeners, and verbal repetition by those who argue in defense of social reform denies them power and purpose. Art intervenes where words cannot. Art intercedes and presents information to its audience without overbearing intentions. The unprivileged—the others, the outsiders, the marginalized—can access tools of political and social reform through art to bypass cultural boundaries and speak across borders.

Transgender identities are not a new invention. The existence of transgender identities extends from prehistory to the present. Crossdressing (and sometimes transgender) prostitutes were recorded in the ancient Middle East and Mediterranean; third gender, two-spirit, and gender-nonconforming individuals live within many indigenous North American cultures;1 members of a third gender or transgender caste of ancient and contemporary India are called hijira;2 and other examples exist in past- and present-day Thailand, Indonesia, Samoa, and other nations.3 4

Information regarding transgender or nonbinary gender history has been erased, notably during World War II when the Third Reich destroyed the Institut für Sexualwissenschaft (Institute for Sexual Research) and its research library, which focused on “the research and dissemination of progressive ideas and practices concerning sex and sexuality.”5 Now, the existence of transgender people is spotlighted by popular culture, and news and entertainment media have modified our history for general audiences, focusing on narratives that involve medical transition and personal suffering. Especially highlighted are the medical transitions; dysphoric body images are neatly packaged as a three-act play of before, during, and after surgery. These visual narratives tend to end in tragedy, with the death or erasure of an individual.

Cisgender men play transgender women in television shows and movies, such as Transparent (2014), The Danish Girl (2015), Dallas Buyers Club (2013), and more. Movies about transgender history, such as Stonewall (2015), remove trans women of color from the narrative altogether. In short, pop culture feeds off of the drama of transgender narratives in a way that disregards the personal lives of transgender individuals and their diversity. 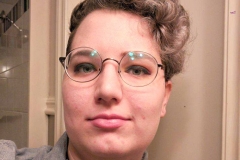 Saba Stovall is a ceramicist in Atlanta, GA and is currently pursuing a Masters in Art History from Georgia State University. Their focus is on the intersection of feminist art history, traditional craft mediums, and marginalization of genders and sexualities. Contact them at saba.stovall@gmail.com.