Tim Rowan was born in 1967 in New York City and grew up in Connecticut along the shore of Long Island Sound.  His art education began during college, receiving a Bachelor of Fine Arts from The State University of New York at New Paltz before journeying to Japan for two years to apprentice with ceramic artist Ryuichi Kakurezaki. Upon his return he worked briefly in studios in Massachusetts and New York before receiving his Master of Fine Arts from The Pennsylvania State University. Tim established his kiln and studio deep in the woods of the Hudson Valley in 2000, where he lives with his wife and son. Tim was awarded the prestigious Janet Mansfield Ceramic Award from the International Ceramic Magazine Editors Association in 2013 and most recently the Ruth and Harold Chenven Foundation Grant, 2015. 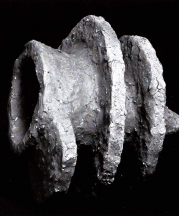 Using Local Clay
I have been interested in using native materials for as long as I have been involved with ceramics. Exploring and being in touch with the natural environment is important to me.
Read More