Think Nothing Of It

Before I became a potter I was a journalist, what they used to call a newspaperman. I'd gone to journalism school and they gave me a degree, so I felt I had a right to the term "journalist," even though most of the hard-bitten newspapermen I worked with rolled their eyes at the word. They weren't exactly press-card-in-the-fedora types, but they might as well have been. I, on the other hand, was one of the brave new breed of journalists who, following Woodward and Bernstein's lead, set out to make the world a better place and maybe bring down a corrupt administration or two while we were at it.

At the paper I had a succession of jobs. First I worked out of a suburban Superior Court as a beat reporter, covering criminal trials. These, by definition, were grisly - rapes and murders and such. Then I moved to a job on the copy desk, editing other reporters' stories. A copy editor's work is grueling and boring at the same time. You're stuck at a desk all day, working against one deadline after another, and reporters hate you for tampering with their prose. To escape that, I applied for the post of arts editor, where I directed coverage of New Haven's vibrant arts community, wrangling freelance writers and reviewers as well as writing and editing.

Early in my time as a journalist I discovered a community art school in New Haven called Creative Arts Workshop and signed up for a pottery class. I thought it would be a pleasant diversion, which it was, but it very quickly turned into something much more important. I began to spend as much time as I could in the pottery studio.

Meanwhile the economy was putting pressure on the news industry. Newspapers in particular had begun a downward spiral of layoffs and a shrinking "news-hole," the portion of the paper left over for news once the ads were in. My job covering the breadth of the city's arts grew more frustrating. My growing zeal for clay collided with a growing disaffection with newspapering, and the idea came to quit the job and see if I could make a living making pots. I had many discussions with my wife and my dog, and after a suitable period to get used to the idea, we all agreed that I'd start a new life as a potter.

Ten years earlier, during my first week on the job at the newspaper, fresh from college and out to change the world, I had taken an immediate dislike to my boss, if for no other reason than that he was my boss. He was also sarcastic, demeaning, and imperious. One day in the newsroom as I struggled to put a story together, he caught me staring at words I had not yet written. (It was 1983 and I was brand new to using a word processor. In journalism school we'd learned to pound out our stories on manual typewriters, which are really wonderful machines except they don't have a delete button.) My boss stood by my desk for a minute to see if I was going to write something and, I suspect, to watch me sweat.

"Write first, then think about it," he said. I tried my best to look as if I were giving this some thought. But I was thinking, "What kind of b.s. is that?" It was a good stretch before it occurred to me what he meant: Don't edit it before you've written it. You have to start with something; then you have something tangible to push off from. You can't add to or subtract from zero the way a mathematician can.

I try to take that approach to clay as well. I can conceive of a teapot handle, for instance, but I don't learn that handle until I've made it, and usually not until I've made a couple dozen of them. My brain isn't the body part that learns the form first; it's my hand. As a medium, clay is much more plastic than words, which need to be rather inflexible in order to maintain their meaning. Clay only acquires meaning by way of its plasticity, its malleability.

My studio isn't the only place where creativity is committed, and ideas strike just as often when I don't have clay at hand. I try to keep a sketchbook handy, because the brilliant flash of insight I'm certain I'll remember when I get back to the studio is the one I forget. It's good to have the visual record of forms and decoration schemes in those pages, but much of my designing happens at the same time as the making.

I can't say I never sit and stare at a pot I haven't made. The old tendency to self-edit still lurks, trying to keep me from going in one direction or another for fear it might be a false move. It's instinctual, or maybe just a bad habit, but I'm learning that the only false move is not to move at all.

Make it first, then think about. Then make another one. 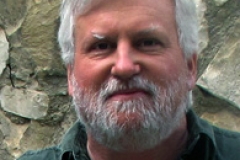 Hayne Bayless is a studio potter in Ivoryton, CT. He managed to avoid any academic involvement with clay, and in 1992 he quit a perfectly good job at a newspaper to make pots. Hayne has often exhibited at the Smithsonian Craft Show, and is a frequent workshop presenter.