The Tale of a Wandergeselle

Man, I’m too old to be a wandergeselle.

I read about them in a New York Times story from summer 2017 just as I was getting serious about pottery. With a cutoff age of thirty, the traditional German journeyman kicks off their wanderjahre, leaving home generally for two to three years (plus a day) to hone their craft by going town to town, taking whatever work they can from as many master craftspeople as will take them on. At forty-three, I’m long past the sell-by date. But whatever; this is the twenty-first century. There’s no potters’ guild to say one can’t approximate (fudge the numbers, rules, and travel dictates), and get on with the learning.

I want to understand clay, and I wander to do so.

This past fall, I needed to learn how to make plates. Specifically, plates similar in form and decoration to those from Staffordshire, England, in the early 1800s. The reason for that was a story, “Old Immortality,” by the poet Mary Ruefle in her collection of short prose pieces, Private Property. The gist of the story concerns an imaginary nineteenth-century Earl of Staffordshire who writes a relatively boring novel and, rather than self-publishing it the typical way, instead, has it hand-written on a set of plates he then used for dinner parties. Ruefle was coming to UMass in December for a reading. I thought it would be fun to host a dinner for her on plates featuring “Old Immortality,” which we’d read aloud just like that fictional Earl had his dinner guests do with his novel before the eating began.

I should add that, in addition to being a journeyman potter, I’m a journeyman poet too. This is my second year in the UMass Amherst creative writing MFA program. These two fields have intertwined in my daily practice. Poems lead me to ideas about pots, and the centering of the clay gets me centered for a day of writing words, as corny as that might sound. 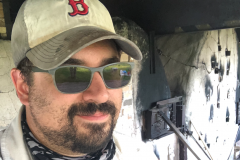 Michael Medeiros is a poet and potter living in Amherst, Massachusetts. He is a student in the UMass Amherst MFA for Poets and Writers program, and is managing editor of the literary magazine Jubilat. A 2018 apprentice at the Moravian Pottery and Tile Works, he is the editor of the poetry compilation A Mighty Room: A Collection of Poems Written in Emily Dickinson’s Bedroom, and co-founder of the Amherst Poetry Festival.