Others will praise and remember Harriet for her teaching or her studio work, but the extraordinary person she was loomed largest, for me, in her role on the Studio Potter board. Harriet served on the board for more than twenty years, from 1990 to 2001, and as president from 1991 to 2006—which is to say, during a crucial period of transition for the organization. To the delicate but necessary task of guiding an institution from its founder into the hands of a successor, she brought a rare combination of skills and strengths. Loyalty, persistence, and an absolute willingness to do the thankless small tasks that make things run—these she had in abundance, along with a deep belief in both Gerry’s original vision and the inevitability of change.

She saw to the core of things and dedicated herself to strengthening that core. At Studio Potter, this meant honoring Gerry while looking ahead to the journal’s future and guiding the board and me through many challenges. Gerry’s approach had favored high ideals over practical strategies, but making that vision sustainable had been left unresolved. Harriet, whose mind was both visionary and practical, worked hard to join the two poles. She overhauled and oversaw the budget, brought in new, younger staff, pursued such details as ISBN numbers, and in general helped bring the journal more in line with the requirements of a 21st-century publication, while never losing sight of its unique history and importance. She supported me, mentored me, and faithfully safeguarded SP’s legacy, acting, in effect, as the institutional memory of the organization. Harriet had an innate feel for the combination of structure and personality that enlivens both works of art and works of human endeavor; it shines in her art, and also, unseen, in the years she dedicated to Studio Potter. For that, I am enormously grateful, as all who read and treasure the journal should be.

When I conjure Harriet in my mind’s eye, I remember, of course, her vigor, which was legendary. But I also see the wide blue eyes that looked so curiously and fearlessly upon the world, set above a strong jaw that left no doubt as to her integrity and resolve. I was honored to know her and to work with her. 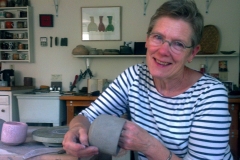 Mary Barringer has been a studio artist for over forty years, making both sculpture and functional pottery. She was the editor of Studio Potter journal from 2004-2014. She lives and makes pots in Shelburne Falls, Massachusetts, USA.