Ayumi Horie works on "Portland" bricks in her studio. Photograph by Janine Grant.

Based in the India Street neighborhood of Portland, Maine, Portland Brick is a collaboration between storyteller Elise Pepple and me. The project celebrates the everyday stories of the city’s residents. Historic, contemporary, and “future” memories are stamped into bricks that repair sidewalks with the city’s own stories. Instead of commemorating the famous “fathers” of the city, our project highlights the immigrants, the women, the marginalized, the voices that typically are not heard. We aim to rewrite the historical narrative that too often upholds the values of the privileged, rather than telling the real stories of the people who lived there.

An area that boasts the first street settled by Europeans, the India Street neighborhood of Portland, Maine, was originally mostly residential, before becoming mixed-use (business and residential) and falling into economic decline in the mid-twentieth century. Over the past few years, it has been undergoing massive gentrification, with new, upscale restaurants and luxury condos taking over what were abandoned lots. Historically, it was an ethnically and socioeconomically diverse neighborhood, home to African Americans and people of Irish, Jewish, Italian and other European heritage, some of whom were involved in antislavery causes.

The challenge for us became how to create a more personal vision of a neighborhood through Tweet-length phrases about human connections. Making stories tangible as physical objects gives them a new life and a new importance. Some stories will shift from being a story told within a family circle to one that inhabits a public space, while others contain long forgotten facts that will be revived from the dead. We hope that the bricks will generate a new cycle of audio stories shared between strangers, friends, families, and visitors.

Through local organizations, online submissions, historical research, and the efforts of Maine College of Art students, Elise collected stories that often came in multiple forms. Fragments of gossip, oral interviews, newspaper clippings, and historical records all contained information that on first impression might seem dry and generalized but was rich in narrative below the surface. Through a story telling event in the neighborhood, a TEDxDirigo talk, and through social media, we have been able to further connect with residents. 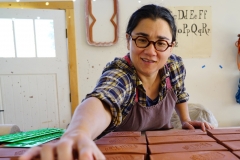 Ayumi Horie is a full-time studio potter from Portland, Maine who makes functional pots, mainly with drawings of animals. She has taught workshops and given lectures at many universities, art centers and residencies in the U.S. and abroad. Her work is in various collections throughout the US, including the Museum of Art and Design in New York City. Currently, she is collaborating on a public art project, Portland Brick, in Portland, Maine and runs an Instagram feed called Pots In Action, which features ceramic art from all over the world.