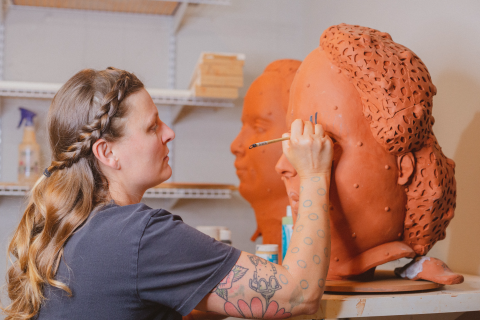 Paige Wright is an artist who primarily works in clay.  She received her Bachelors in Fine Arts with an emphasis in ceramics from The University of Montana in Missoula, Montana, in 2006. Wright has participated in several artists-in-residence programs including the Carbondale Clay Center's long-term residency program, Red Lodge Clay Center's yearlong residency program, Ohio University's study abroad program at The International Ceramics Studio in Kecskemét, Hungary, and Project Network at the International Ceramics Research Center: Guldagergaard in Denmark. She received her Masters in Fine Arts with emphasis in ceramics from Ohio University in Athens, Ohio, in 2012. Paige was brought back to her hometown of Portland, Oregon in 2013 to help start and run the vessel design and production house Mazama Wares. She has held positions teaching at Ohio University, Grand Valley State University, The Oregon College of Arts and Crafts, and Clark College in Vancouver, Washington. Known for her expressive faces and versatile building techniques. She conducts workshops, lectures and exhibits around the country. She is currently working as the Research and Development Associate at Pratt and Larson Tile Company. 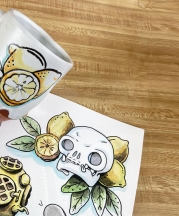 My Friend Flash
Tattooing sings many notes parallel to the song of ceramics. Like ceramics, tattoo craftmanship exposes the fluency and experience of the maker. Drawing and putting in a great line is an example of fine craftsmanship. Pairing exceptional line work with the individual’s conceptual engagement of image elevates the craft, just as the potter’s concept of a mug elevates the form.
Read More