Gardiner Museum Adjunct Curator Rachel Gotlieb organized a comprehensive survey of more than seventy objects spanning Heinemann’s career since 1979 and featuring new works. Viewers will be allowed a feel for Heinemann’s studio through an installation of sketchbooks and source material, including original photographs and a wall of ceramic test tiles. The exhibit will include Heinemann's time-lapse video that documents a treated clay surface as it dries, warps, and cracks according to both chance and calculation.

In 2014, following a show of his work at Lacoste Gallery, Concord, Massachusetts, Heinemann wrote "Catch and Release," for Studio Potter about the development of his work including subtle discoveries in the studio and his unique use of molds:

Sometimes progress comes through holding on, other times by letting go. Having attempted the former, I eventually came to a more negotiable place. As it turned out, gravity once again came to the rescue, for it was only when I allowed the top plane to slump during the drying and firing that things began to hum. The forms now presented a shallow concave shape instead of a strict flat plane, and as the top slumped, it pulled on the sides, creating a more complex curvature in the walls—still strongly defined geometric shapes, but rendered somewhat softer and sexier. 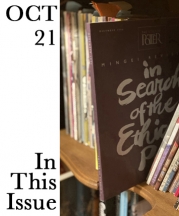