The following article is adapted from an interview conducted by Mark Shapiro in September 2005 for the Smithsonian's Archives of American Art, as part of the Nanette L. Laitman Documentation Project for Craft and Decorative Art in America. The complete transcript is available online at https://www.aaa.si.edu/collections/interviews/oral-history-interview-michael-simon-11797

At Haystack one time, Bunzy Sherman asked you, "Michael Simon, were you ever a production potter?" You said, "Bunzy, what the hell do you think I'm trying to do?" And she said, "You are an artist - A-R-T-I-S-T."

Yeah. But I think there was no difference. Sure, you can say there's an intent [to art], but if you don't believe that pots are going to carry your self, then why would you invest yourself in them? And if you think they do, then how can you not give them all the attention that it takes?

I was born in 1947 out on the plains of western Minnesota, in a little town called Springfield, near to South Dakota. It was a farming community, no big metropolitan areas. I don't think that I went to Minneapolis until I was a senior in high school. I grew up on a farm, so I spent a lot of solitary time as a child, out on the plains. As a child, I did little things on the farm like feeding the chickens. We kept pigs and cows, and I helped a little bit with the milking. But I really was not old enough to drive a tractor or operate any equipment, and we'd moved from the farm by the time I was old enough to do real work.

As a high school student, I took art the last two years. We had a great art teacher named Angel Lillo who came from Spain. I was lucky to have him the first year he was in Minnesota. He's a sculptor, a real artist, and he came to teach us in Faribault, Minnesota. It was such a good break for us - children who didn't really know anything about art - to have a passionate sculptor come teach us what art was.

We worked with what was available in school, which included plaster and clay. Even though he didn't know how to work on a potter's wheel, they had a treadle wheel and he liked me. He told me that if I wanted to work on the wheel he would help me. He gave me some books that would tell me what to do, and I did it - I just kind of taught myself how to throw, from reading. I actually made some pots; my mother still has one of them. [Laughs.] It's very thick. But it's centered. I'm always amazed when I see it, because I made it with so little knowledge. 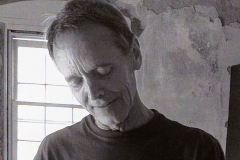 Michael Simon (b. 1947) is a functional ceramic artist who lives in Athens, Georgia. His works are usually fired in salt kilns with motifs of nature and animals. Simon was a student of Warren MacKenzie, who was, in turn, a student of Bernard Leach. Though their influence is felt, Simon's work is unique; every pot emerges with an integrity and attitude all its own. He received his B.F.A. from the University of Minnesota and M.F.A. from the University of Georgia. His work can be found in the Los Angeles County Museum, the Minneapolis Institute of Arts, and is in The Rodger Corsaw Collection of Ceramic Art at Alfred University. (Biography edited from Michael Simon's profile on The Nevica Project website).