On July 1, 2015, I was on a plane returning to the southwest coast of India, to the state of Kerala. I had been invited to continue my work with Amrichi Multi Modal Applications and Computer Human Interaction (AMMACHI) Labs and the Live-in-Labs program at Amrita University in Amritapuri. AMMACHI Labs is a research institute that aims to better society through technological innovation, and Live-In Labs is a subsidiary of AMMACHI that exposes youth around the world to problems faced by rural communities in India.

I had become involved with this organization in the summer of 2014, when I traveled to Kerala as a graduate student of the University of Massachusetts Dartmouth. Although my focus of study was ceramics, that summer I was invited to tag along with the textiles department on a service-based project led by one of my primary advisors, Deborah Carlson. Carlson had been doing work year-round for a textiles operation run by the Amritapuri Ashram, one of many programs facilitated by world-renowned humanitarian and spiritual leader Amma (Mātā Amṛtānandamayī Devī). At the ashram, a group of women create items from donated fabrics that are sold worldwide to raise funds that go toward Amma’s numerous charities.

Amiritapuri was the first and is still the major ashram of a long list of international ashrams that Amma runs. Located in the rural area where she was born, it sits on a thin peninsula covered in coconut trees. The Indian Ocean is to the west, a river to the east, and just past the river, Amrita University sits on the mainland. It is a hot, humid, lush area, where people stay true to traditional customs. Amiritapuri is known for fishing because of its abundance of waterways, which would lead one to think that clay would also be abundant and used for making things. Yet when I did my initial research on the region, clay did not seem to be a particularly popular medium.

At the ashram, my group’s plan was to aid the charities supported by the organization Embracing the World (a global network of regional humanitarian organizations) as well as the Empowering Women Program of AMMACHI Labs. My role was to provide feedback and critique the products, designed and manufactured there for a global market. 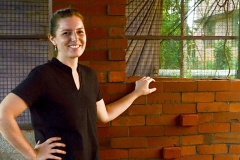 Meaghan is from Northern California and recently earned an MFA from the University of Massachusetts, Dartmouth, as a Distinguished Art Fellow. In addition to her humanitarian teaching in India, she has worked as a studio artist at the Guldgargaard International Ceramic Research Center,  Denmark; Shigaraki Ceramic Cultural Park, Japan; Sanbao Ceramic Institute, Jindezhen, China; and was the recipient of a Windgate Fellowship to work in Seto, Japan.