At the moment I have two kilns, a 45 cu. ft. kiln which I use mainly for flameproof casseroles and a 40 cu. ft. salt kiln which is the one I use continuously. I prefer the salt because it is very sensitive to the different kinds of materials that I use — the pale clays which have grolleg or the clays which are high in Jordan or Goldart or Fire clay. They take the salt in so many different ways.

Every salt kiln-varies to a considerable degree. The special effects that I'm getting on my pots now I could not possibly duplicate in another salt kiln. This particular kiln has a very high pressure gap line so that there is a lot of turbulence and therefore the distribution of salt is relatively even. It is somewhat hotter on the floor where the burners come in and that is where I place the larger pieces so that they receive a heavier accumulation of salt. There is slightly less salting on top and that's fine. I'm looking for some variation.

Over the years a salt kiln will keep changing because of the kiln wash build-up, so one has to continually make minor adjustments in the firing and salt schedule. I usually start my salting when cone 10 is almost down. About 25 pounds of salt are dropped in holes directly above the burners. Salt placed in other areas, I believe, hardly matters because the real burning happens at the hottest place and is carried with the flames. If I have a place in the kiln that I think may not be able to get salt, such as the front, I build a hole into the top of my door; when I am salting, I take the plug out of the hole and close the damper down. Flame shoots out of the opened spy, thereby carrying some of the salt into the area directly in back of the hole. With a pressure burner setup if you close the back damper, it has to go someplace so in effect it will come out anywhere you let it.

Rhythm is very important. Four bags of salt are dropped before each burner and the damper is closed almost completely for about 15 minutes until the salt melts. The damper is then opened; I let it run through for another 15 minutes and do the cycle two more times so that the whole salting process takes about an hour and a half. I cool the kiln rather quickly by opening everything that can be opened for about half an hour or so until the bright color dulls some.

All my pots sit on clay pads. Nothing goes directly on the shelf or on the floor. The pots on the floor sit on pads bigger than the foot of the pot; and as I go further up, smaller balls of clay are used. I often stack two or three high, but I don't go higher because the pots may slump at top heat.

Glazing isn't that interesting to me. Some pots have a bit of slip, but I don't use glaze on the outside. I really work with developing the form and varying the surface with different zones. Salt gives me that possibility. Everytime a salt kiln comes out, it has a whole new tone depending on the atmosphere. It can be all grayer or all browner or all sparklier. In one kiln there may be similar color, but then ten kilns together give me a lot of range.

When I begin a working period, I start with a small covered jar to warm up and that might take days — the slow rhythm of just making, making. I start with a small piece and I get a little bigger one, just gradually flowing into the scale and mood, forming ideas; that happens slowly.

The wheel that I work on is patterned after the wheels I used in Italy. Instead of straddling the wheel shaft, I sit on the right side of the wheel which actually feels more centered because the work flows out to the right. One advantage is that you are already in a better position to lean over to look at your work and therefore able to maintain a straight back. The lower back is spared much of the strain that comes from a twisted working position.

Since childhood I have always painted and drawn, and this early interest began to develop for me a whole art background. My parents immigrated to this country from Russia when they were quite young and made a living — working in factories in the city. Their background was not in art and they probably would have discouraged me if they thought I'd end up" as an artist. I went to the High School of Music and Art in New York City, but strangely enough I didn't touch clay until after I had graduated from Brooklyn College.

Serge Chermeyeff, the British architect and educator, was in charge of the Art Department there. They had a marvelous staff which included many Europeans who had fled the war, so we had a kind of Bauhaus education in Brooklyn. It was really an education in using materials in an imaginative way, and I loved it. When I graduated, however, I still did not know what a potter was!

It was David Weinrib who gave me my first lump of clay. He had left Alfred University just before graduation and worked for Design Technics in Stroudsburg, Pa. We had recently been married, and I joined him there, actually working as a production sprayer and later modelling large lamp bases from solid clay. I didn't know anything about handbuilding, so I would make a solid form which was followed by a press mold. I become a handbuilder because I didn't know how to throw. All the forms that I made were solid like sculptural models, but I knew that I wanted desperately to learn to throw.

In 1950 we went to Italy and lived for a year and a half in a little village outside of Florence, a pottery village with a few large industrial potteries and perhaps fifty to a hundred smaller potteries. It was there that I learned to throw by attending a school run by one of the factories. We set up a little potter's shop in our apartment and ground our own glazes from raw lead and sand in a mortar and pestle.

When we had returned to the U. S., I felt that I still needed to go to school because all I had really learned was how to throw. I had no technical background so that is where Alfred University and Charles Harder come in. I received a graduate fellowship for $1,500, and David and I lived on that for a year. It was a marvelous time to be at Alfred— more Informal than it is today, somewhat shabby with a few little kilns around, but it was much more to my temperament.

At Alfred I began working with stoneware for the first time, and I've really worked with little else since. Charles Harder was a fine instructor and very instrumental in shaping my sense for form. I would fire a kiln load of work and bring it in, and he would say a few words and back I would go. It doesn't have to be a formal teaching situation, but it has to be somebody who knows more than you and who cares about your work. By this I mean more criticism than technique. Students often think that if they have a good technical background, that's all that matters. To me it's more important to have a solid art background, to have studied art history, painting, sculpture and design, and to look at the world with seeing eyes.

At the end of my first year at Alfred, a position became available at Black Mountain College, and David and I jumped at the chance. Black Mountain at that time was a fantastic place. All the abstract expressionist painters were there in the summer — Franz Kline, Tworkov, DeKooning. Merce Cunningham and his dance company were there and John Cage and M. C. Richards.

In 1954 after two incredibly rich years for us, there was a real feeling that Black Mountain was going under. So a small group of people whom we had gotten to know there bought over one hundred acres in Stony Point, N.Y., to form an artist housing co-operative. The first building to go up was the pot shop, which was divided into three workspaces where M. C. Richards, David Weinrib and I could work.

After returning to New York, I remember walking in Manhattan and thinking, "My god" . . . what a challenge, this huge city for a market, how frightening where everything changes and every year it's a different color and a different style. It was just incredible to me the sort of stylistic changes that the city demanded.

I was very fortunate because right away I began selling at Bonnier's, which took perhaps two thirds of my production. That kind of security was really welcome at the time. When Bonnier's changed hands, Georg Jensen picked up my work until they moved to a new site and became less interested in hand-made things. America House sold my pots, also, until they closed in the early '70's.

Now the market in New York has changed considerably. The large department stores such as Macy's and Bloomingdale's are buying huge quantities of hand-made items. I'm not against selling there, but I think that they must want volume, and I'm not that kind of volume potter. I'm known as a production potter, but it is a very limited kind of production. I do work in groups, but there aren't dozens and dozens of the same thing.

Sometimes I think that heavy production can be very limiting. If a potter gets an order to make hundreds of say four pieces, then he can easily turn himself into a factory situation which will not give him pleasure. I think that it can be dangerous in that he may lose the quality in his work and the joy in working if he ties himself down to a single line for long periods of time.

There is an enormous market, but the retailer can often dictate to the craftsman, and one has to be careful of that. Each person has to know his own limit. If some potters get real pleasure in making twelve dozen, if they can keep their souls alive and their interest fresh by making that kind of volume, then that's all right for them. That is not, however, my way. I have to deal with each piece on the wheel as an individual expression. I enjoy having one or two shows a year because it gives a reason and an excuse to make bigger things, to experiment with ideas which one might not have the freedom to do in a production situation.

After all these years as a potter, I am still conscious of the privilege of my life. There is still the deep pleasure of making pots on the wheel, the excitement of firing, and kiln opening, the challenge of new forms. It is a life of so much variety and one for which I am fully responsible — a rare quality in work today. 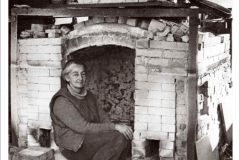 "[Karen] was a towering figure of the postwar studio pottery movement, pioneering salt-glazing in the 1960s and wood-firing in the 1980s. Her work opened undreamed of possibilities of expression for the handmade pot. For the many potters who knew her, she was a mentor whose work embodied the creative power and singular voice to which we all aspire—her life in complete harmony with her creative vision." --Mark Shapiro (blog.nceca.net)

Karen Karnes (1925 - 2016) was a major icon in American craft, she wrote and was the subject of numerous articles in Studio Potter, many of which are now available to the public.