I’m drinking out of a mug made by the ninety-three-year-old Bunzy Sherman, who has said with finality that she is not an artist but just a potter. After spending two weeks with Bunzy at Haystack Mountain School of Crafts, my suspicion is that this acute woman has been making these kinds of peremptory statements her entire life, though perhaps now in her tenth decade, she can speak this way without challenge from anyone. And there is seldom need to argue or object when Bunzy speaks. She’s often right and, barring a hearing aid malfunction, she misses nothing. Did I mention how charming she is? And the irresistibility of her laugh?

In describing herself as just a potter, Bunzy means, I think, that her pots are made directly and simply, without any fuss or rigorous engagement with notions intrinsic to the discourse of ceramics—they are forms that are utterly utilitarian. She said that in a workshop with Warren MacKenzie, the famous potter mused over “the sheer inadequacy” of one of her pots. The “inadequacy” that she claims Warren observed could also be the mere adequacy that Bunzy describes in her work.

I asked Bunzy if I could buy one of her mugs as they were coming out of the kiln, and she was incredulous. “Why would you want one of my mugs?” she asked. I disappeared and returned, waving a twenty-dollar bill in front of her, demonstrating my seriousness. This deceptively simple object, which I ended up purchasing for fifteen dollars, is a cylinder, taller than it is wide, with the proportions of a small soup can, a lean, smooth clay wall with an undulating rim. When we first met, she told me that she made only a few forms, but that she had developed one design and was currently working on another. 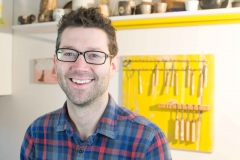 Bech lives in South Burlington, Vermont. He is the director of a community pottery studio in the Living/Learning Center at the University of Vermont.