Using local clay is a way to experience place, to learn something about the earth. I use it almost as a found object, for the historical, cultural, and geological resonance that particular clays bring to my work. I'm interested in the gorgeous panoramas like Stancills mine, but also in building foundations and even the holes in the street for water-main repair. When the repair is completed and the road repaved, I know something about what is concealed under the surface. Five minutes from my studio there is a construction site that for two weeks revealed incredible strata of red, white, gold and purple clays. I gathered bucketsful and took photos. Now the construction of the building has begun and the clay bank is covered over. I have the samples and the memory of the scene. The clay becomes a souvenir of that experience.

I love prospecting for the clay - the hunt, scouting around on my daily commutes for new construction sites or street repair. I love talking to the workers about the clay and how I use it. Often, once the workers find out what I'm doing, they start bringing me clay chunks that they think are interesting. On many occasions they've loaded up my whole truck. Sometimes they'll even come to an exhibition.

Dug clay has individual character. You have to find out what it is good at and you don't know until you work with it. My studio is in Mount Rainier, Maryland, where a vein of excellent red clay runs through the area. At cone 04 it fires to a rich terracotta, and at cone 6 oxidation a deep purple-red. Soluble salts migrate to the high points of the surface in drying, creating a white crust at cone 04, and a sheen at cone 6. It's a beautiful effect, and right in line with my work process. I like to set up conditions for things to happen; I want evidence of my hand and my thinking, but I want an equally strong voice of the material just doing what it does.

I like dug clay because it has rocks. When I hit a rock in throwing a pot, troweling a surface or incising a line, it's an interruption that causes me to pay attention. And it's another way for the material to express itself. The rocks cause cracks in the firing, revealing inherent stress.

Growing up in Alabama, I knew clay as the overly-abundant material for mud pies and as something that could get me in serious trouble if I tracked it onto my morn's carpet. I was in graduate school before I realized that intensely-colored dirt was an art material. I was far from home, and the red Alabama clay suddenly became much more meaningful, charged by its remoteness and scarcity. It felt like something that was mine. The Alabama clay I brought back to Alfred may not have been so different from clay that I dug there, but the material embodied absence and longing, and in some way brought that to the work I made with it.

By far the most meaningful experience I've had using dug or native clay comes from my friendship with Emlyn Stancill-Whitin, my visits to Stancills mine and my participation in the "Coming Home" exhibition we held there. Emlyn grew up at the mine, playing on the giant sand piles and swimming in the slip pond. She loves sharing the mine with ceramists, because we get as excited as she does about the beauty of the site. When NCECA came to Baltimore last year, Emlyn proposed an on-site exhibition of the artists who use Stancills clay. I learned a lot during the course of that project.

I usually use the geology of clay as subject matter, but I thought that the best way for that earthiness to be seen was in contrast to the hard edge, the white, the "other" of the gallery. When I brought some finished work to Stancills, I saw a surprising shift and a more subtle relationship between work and site. In the raw and semi-amorphous context of the mine, evidence of the hand, of craft and articulation stood out and became like a jewel in a setting.

The opening reception for the show was glorious. It was the first warm and sunny day of the spring, the work looked fabulous, and we had a great crowd - ceramic students, artists, geologists, curators, and area residents. But my favorite part of the project was the installation during the days before. We spent whole days digging in the frozen ground with shovels and pickaxes, sweating. We noticed the changing light on the various banks of clay, the consistency of the clay as we dug through the cold hard outside layers to the creamy smooth softness of clay protected further down; we discovered surprising relationships between art and site. Look at Maggie Creshkoff's pots wedged into those fissures, look at how perfectly Dan Ody's platters blend with the colors in that clay bank! Look at Catherine White's pot against the backdrop of the pond! I found an eroded trench running over the side of the cliff and positioned my "Channel Drawing" underneath to suggest a continuation of the flow.

We all exulted in the abundance, the richness, and the beauty of our primary material in its elemental setting. I kept thinking what a luxury, and what an absolute necessity, it was to do this. Emlyn had specifically oriented the site to take advantage of the late afternoon sun. We made sure to stop work at sunset, have a beer, and properly appreciate her efforts.

My studio is in a neighborhood with a lot of kids, and in good weather I am the first stop after school. I taught them about digging clay, and I make available a stack of shovels just inside the doorway, which they can use anytime I am there. The other day I heard one of the regulars talking to a new kid, showing him how to make a pinch pot and telling him how to tell the difference between clay and dirt. They say, "This clay is tight" with unintended double entendre that I find hilarious. They think it is immensely cool to dig stuff out of the ground and make something with it. I have to agree. 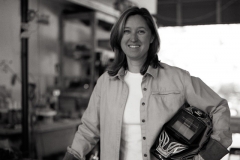 Margaret A Boozer is an American ceramist and sculptor, best-known for her clay and ceramic compositions, or landscapes, that focus on the individuality, history, and geology of the clay used as subject matter. Based in Mt. Rainier, Maryland, Boozer is the founder and director of Red Dirt Studio.