Hayne is a potter and lives with his wife, Mara Lavitt, a photographer, in Ivoryton, Connecticut. In school he managed to avoid any academic involvement with clay, and in 1992 he quit a perfectly good job at a newspaper to make pots. Hayne’s work has been shown at the American Craft Museum, and he’s been a frequent exhibitor at the Smithsonian Craft Show and the Philadelphia Museum Craft Show. His pots have been published in “Objects for Use: Handmade by Design” by Paul Smith, “Design Language” by Tim McCreight, “Clay: A Studio Handbook” by Vince Pitelka, “The Encyclopedia of Pottery Techniques” by Peter Cosentino, “Creative Pottery” by Deb Schwartzkopf, and a number of Lark Books. Hayne and Robbie Lobell are co-presidents of Studio Potter’s board of directors. 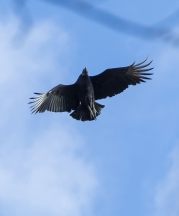 Out of the Blue, Into the Black (Vulture)
She apparently needed us, but so did we need her. She was earthbound, and, like us in our pandemic prison, unable to go far. But if she could break free, then perhaps so could we shed ourselves of this hermetic existence and return to our kettle.
Read More