The Figure as Metaphor

It took me a while to come to the figure as a vehicle for what I wanted to say as an artist. As a person who had always been engaged in both reading and writing, I had long been spinning my narratives in words. When I started graduate school I was making pottery, but within a week of my arriving both of my parents became sick, and somehow making pots seemed mute to me. I began searching for a way to work that would articulate the sense of loss and helplessness I was experiencing. I tried writing and drawing on my pots, but eventually I made my way to the figure.

I began by trying to make some of the objects and images I was writing about. The phantom limb was an idea that seemed to put a name on what I was feeling, as it represented the physical manifestation of loss. The phenomenon of losing a physical part of one's body and yet still feeling its pains seemed an appropriate metaphor for my emotional state. I began at a lab where technicians made prosthetic devices. These were simple wooden forms that contained mechanisms to allow for movement and were held onto the body by leather straps. In their crude and utilitarian mimicking of real flesh, the objects themselves were eerie reminders of vulnerability and loss. In my studio I tried copying them, using coils and slabs, but these forms didn't resonate. Eventually I turned to making legs ending in Mary Jane shoes and held on with leather straps, mimicking both the prosthetic and the real but being neither. From this starting point I moved to making the full body and incorporating a missing or detachable limb. While I was working through ideas, I was also figuring out how to construct and sculpt the figure, so I worked at a variety of scales as I explored pose, construction, and surface.

I came to the "found figure" when I began using cast objects during a residency at the Appalachian Center for Crafts. At first I was looking for a way to contrast the highly rendered and the gestural. Adding a cast white bird to a terracotta bust, I realized that the found object carried the associations and emotions of people's experiences. I was especially drawn to what I call "objects of nostalgia" such as thimbles, teacups, figurines, small cast animals, and pill boxes, that could be symbolic of the loss of innocence and the passage of time. They reminded me of the little bits that my mother and grandmother kept in their houses.

After I moved to Long Beach, California, I stopped depicting the physical body and let figurines and dolls become stand-ins for the figure. I not only cast these pieces, but also copied vintage dolls and toy soldiers in order to suggest both the history of innocence and the idea of fragility. I tried to access the past that inhabited these objects. Living in the big city with the physical residue of so many lives and influenced my desire to use found images, as it seemed I was reclaiming the lost possessions of my family. I hunted in the thrift stores and antique malls where the things that had once meant so much to someone lay unclaimed. Appropriation allowed me to use the power of objects by tapping into the associations and memories we have with dolls, figurines, and bric-a-brac. I created "grotesques" from these found objects, adding new heads and creating new contexts that juxtapose these benign images with elements that were unsettling or nightmarish.

The figure resonates across time and space to connect with everybody. In religious iconography, folk art, and even modern-day film and photography, images of the body allow us to project ourselves into other worlds and find our common humanity. As I continue to work with the figure, I am drawn to stand-ins for the body rather than literal depiction. The figure is a vehicle for my ideas, rather than a reference to a particular person. I am inspired by the work of Henry Darger and his "Realms of the Unreal," where he uses storybook images to people a violent narrative. The work reminds me that we live in an imperfect world balanced between innocence and desire, and that the meaning of images can change through context. I am also very drawn to the Korean funeral figures called mokin. The naïve and playful rendering of the figures contrasts with their purpose, to accompany the dead and keep their memory alive. They are objects that evoke a childlike innocence while reminding us of our mortality.

Working with the figure is a way of exploring the inner self in order to talk about things we cannot express in words or would rather ignore. As I cast, assemble, and copy found objects, I am exploring the interior lives and narratives that lie hidden beneath the surface. Through this process I hope to both understand my own experiences and connect to the experiences of others. The figure allows me to get at these emotions, by acting as a proxy for the self and functioning as a universal image. 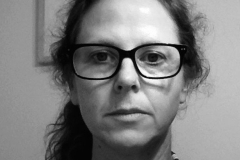 Debbie Kupinsky received her BFA from the Kansas City Art Institute and MFA from LSU. She has completed artist residencies at the Archie Bray Foundation, Appalachian Center for Crafts and the Arts/Industry program at Kohler in Sheboygan, WI. She is currently an Assistant Professor in sculpture at St. Norbert College.