Daniel Velasquez, "...the idea that art was the only thing I was good at was separating me from people." Photo Credit: Natalie April

In the February 2021 edition of Studio Potter, Marion Angelica interviewed several ceramists to find the positive impact a year in quarantine might have provided. It was a survey intended to train our hearts and minds toward the proverbial silver lining. One artist she spoke with was Daniel Velasquez.

“After eight years of establishing a ceramics career, and some significant soul searching, Daniel Velasquez (San Francisco, California) decided he would separate his income-generating livelihood from his art making. He wants to apply his creativity to a career in sustainable, artistic building and construction. He is currently working in construction and learning plumbing with an eye to finding ways to better use water and studying electricity in order to make batteries from graphite and ceramics.”

It felt like there was more of a story here than one paragraph allowed, and I was curious about the development of a battery made from graphite and clay. Initially it seemed the conversation would be highly technical, but as we chatted, it became apparent that philosophical revelations were the order of the day. 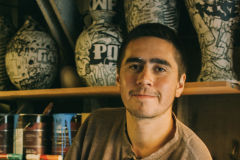 My Name is Daniel Velasquez, and I am a full time international public artist, sustainable designer, and founder of Hydralas Designs. My goal is to use art to give back and inspire diverse communities by creating spaces for the public in which creative expression is abundant, and nature can thrive. I developed a studio process of working with technology so it enhances tangible materials such as clay. I am always looking for opportunities to use more diverse mediums and create art that relates to the public on a deeper, more human level. In recent years I have been working as a full-time international muralist. This work has been rewarding because it has allowed me to contribute to diverse communities, and promote creative expression. Lately I have been working with a gallery and a few different interior designers to start creating living wall art to promote environmental consciousness and healing.