Cups and dish in front of a "Dream" painting. Photo credit: Atelier Parter

A delicate metaphor. Seeking of truth. 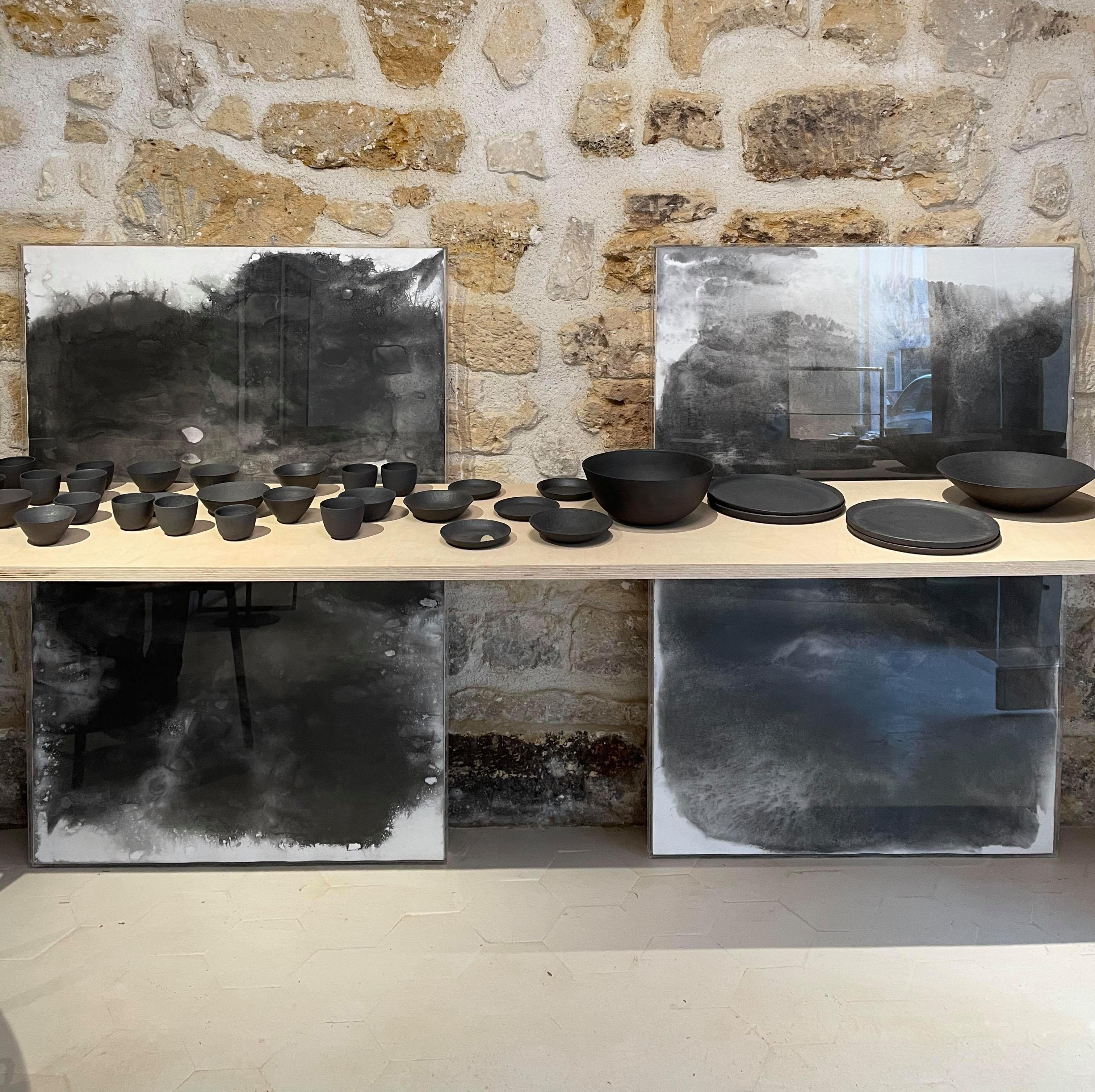 42 Meslay Street, Paris, France. I enter a small and discreet workshop with a well-tended showcase facing the street. This is where Atelier Parter is located. The ceramist here only insists on this point: it is a workshop, not a store. Opening the door, visitors are confronted by a potter’s wheels and a desk, the area of creation, an enclave at the back of the shop. Right from the making space, a table of pots on display. It is only by turning the eye that one can see the finished objects. They can be acquired, of course, but are mostly present to give a tone.The atmospheric nuances change with each collection, but the foundation remains firm.

From interior design to a ceramic’s detail

The interior design is minimal, the space – easily transformed. The objects do not dominate the space,yet everything operates in support of their display. Carefully arranged, a context is created. There is the sense of an informal exhibition. The showcase is a microcosm of Atelier Parter’s latest production. Some bowls and plaques are available for purchase. Dried flowers and glazed shards are intermittently present as decoration. Achromatic fields of black hang on the wall, representing different layers of a dream. To make them, Atelier Parter superimposes seven layers of blotting paper and then paints one dream on the first layer. The next layers appear in-between consciousness and subconsciousness through the paper’s capillarity.

The voluntary and involuntary are mixed. Where does intentionality begin? 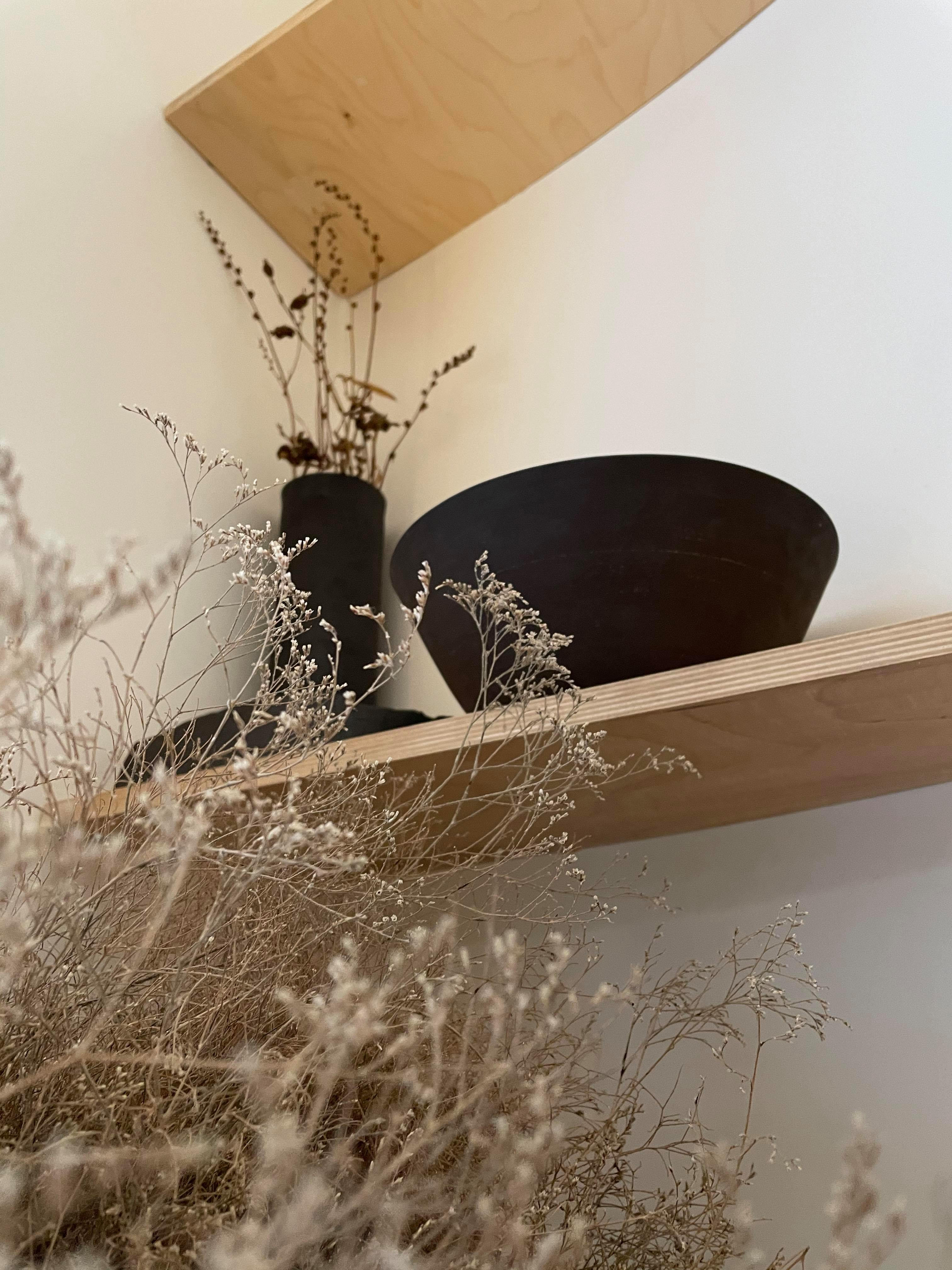 Atelier Parter likes to work on the atmosphere of a space as much as objects, but the distinction is irrelevant.

Philosopher William James noted that it is impossible to decide what defines a forest as one strolls in it. The forest is both the tree and the leaf, the hidden ridge after a seemingly final valley, the river and the grass. And so the forest is not just one tree, but also the multitude, the group.1

What is the whole? Where does the detail begin? The work of Atelier Parter follows the same path; the atmosphere, the emotion, is in the detail of a spatula mark at the base of a tiny cup as much as it is in the lighting of the room or the faint perfume of camphor that comes back from time to time. Discreet subtlety is recognisable at every level and the viewer’s mind can lose its bearings.

The ceramic work : likeness can be deceitful 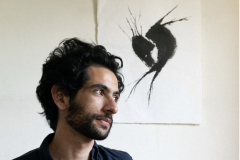 Nessim Cohen has an M.A. in philosophy from the Sorbonne and an M.A. in political theory from Sciences Po, both located in Paris, France, where he works as a writer and an artist. His production involves ceramics, abstract calligraphy and performances. He first studied ceramics in Japan where he also was a guest tea master for two years. He has been writing about ceramics, tea ceremony and related arts for various publications as well as giving lectures and workshops on how to make tea bowls and the history of Asian ceramics in New York, Paris, and Maastricht, Netherlands. Nessim Cohen can be reached at nessimcohenstudio@gmail.com