Public art is a humbling opportunity to create something that is going to outlive yourself.[1]

Last month, in Part I, we left studio potter Diana Kersey, having just broken into the practice of public art. This month, while sharing her background from star athlete to ceramist, we explore further her approach to design, content, and community engagement as she completes her first major public art commission.

Concept, Content, and Process
As Kersey developed a design concept and content for the twenty-four ceramic panels that would comprise her first public art commission, The Life Cycle of the Gulf Coast Toad at the Mulberry Avenue bridge in San Antonio, Texas, she referenced "Early Development of the Gulf Coast Toad, Bufo valliceps Wiegmann," a scholarly article published by the American Museum of Natural History in 1957 with forty-six detailed illustrations of the toad's growth from embryo to larvae through metamorphosis.[2]

Additionally, illustrations in Ellin Beltz's Frogs: Inside Their Remarkable World, which detailed the development from egg to frog, were useful. Kersey created a narrative in clay that she playfully described to a student audience as "the life cycle of the toad, from two toads getting hot and heavy for each other, and the eggs are fertilized, and they grow into tadpoles and froglets. For a tadpole to get to a mature frog is a bit of a miracle because they are food for everybody else throughout the whole (growing) process."[3] 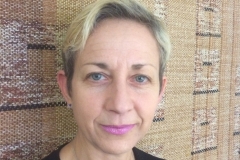 Teresa Eckmann is Associate Professor of contemporary Latin American art history at the University of San Antonio, Texas. She is the author of Neo-Mexicanism: Mexican Figurative Painting and Patronage in the 1980s (UNM Press). She has curated several exhibitions in her field including most recently, Alberto Mijangos,159: A Retrospective of His Art (and Life), and Status? Prints from Puerto Rico to San Antonio for the city’s Department of Arts and Culture. She is currently working on a second book project, Growing Urban Presence: A History of Public Art in San Antonio.