Hands of Amy Smith and her daughter, at the potter's wheel.

I have been patiently waiting since four-thirty this morning to write this article. Now, at eight p.m., I am in my basement studio ecstatic to put to paper—or more accurately, to screen—the words I have imagined writing all day, for the last month, and since I had my first child four years ago.

Nothing illuminates the difficulties of being a parent more clearly than becoming a first-time mom, and they can be summarized as four main problems. First, the logistical and financial implications of children are infinite, complex, and not fully comprehensible to the childless. Our society does not value or appropriately compensate new parents, childcare, and domestic work. Parents are judged for what they do and don’t do. Finally, we idolize women who swiftly bounce back (physically, emotionally, professionally) to their pre-motherhood selves.

Throughout my formal education, all of my influential teachers (whose mentorship I deeply treasure) were men and childless. “Acting more like a man” never felt odd because it was how I was raised; it was the brand of feminism I learned. But the most visceral feeling I had as a new mom was of not belonging. The masculine paradigm in our artistic communities still affects behavior and excludes acknowledgement of the biology, emotions, and circumstances of artist/mothers.

In a contentious article published in 2016 by the German newspaper Taggespiegel, Marina Abramović openly acknowledged her decision not to have children, asserting that doing so would have been “a disaster for my work.” Abramovic continued, “In my opinion that’s the reason why women aren’t as successful as men in the art world. There’s plenty of talented women. Why do men take over the important positions? It’s simple. Love, family, children—a woman doesn’t want to sacrifice all of that.” 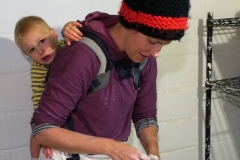