Students work with clay at the Perkins School for the Blind, Watertown, Massachusetts. Top, center: author Elizabeth Cohen (left) with a student.

Working with Deaf and Blind Students

Through thick-lensed glasses, Joey, age 18, assessed the properties of the plastic texturing tool, holding it some two inches from his acned face.  He was my third student that morning to exhibit this behavior. On my first day of teaching in the deafblind program at the Perkins School for the Blind, I was doing my own assessing. This was a new experience for me, and I had to learn on the fly.

Since many of my students were completely deaf, the classroom was, for me, unusually quiet. I used the gift of silence to observe. Mille, a tactile-defensive deafblind nine-year-old, pulled away from the feel of clay but was willing to try using a hand-over-hand method to push a texturing tool into a small ball. Some students preferred to interact with the clay via an “extension” of their hand, e.g., a tool, while others gravitated toward the immediacy of touching, pushing, smashing, rolling, and poking.

Katie, age 13 and completely deafblind, grunted with pleasure when the teacher's aide put a ball of clay in her hands. She held it close to her body, rocking back and forth, intensely squeezing and “reading” with her hands for a solid twenty minutes. She asked for more clay and firmly resisted giving it up when the teacher signaled it was time to go. She stubbornly insisted that she take the clay with her. While she needed constant monitoring, because of her complicated medical conditions, the aide and I agreed to let her take it because the clay was nontoxic, talc free, and posed no other safety risk.

Antonio, a higher-skilled, energetic young man of twenty, came independently to class. I had limited American Sign Language, and he had garbled speech, but we were able to communicate effectively. Antonio was a curious, charming student. He wanted to know about where clay came from and about the firing process.  After I demonstrated a few techniques, such as coiling, slab rolling, and pinching, Antonio declared his love for coiling. He came each day ready to coil pots at a steady and rapid rate, creating his own production line. His goal was to give his pieces as gifts to his family, whom he adored and talked about during class. Unlike many students in the program, he chatted breezily as he pinched away. 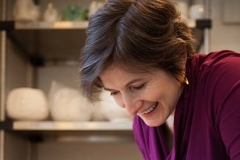 Elizabeth is a Boston area independent studio potter creating wheel-thrown and altered functional and sculptural work in porcelain. Organic elements in nature, such as flowers, fruits, seeds, shells, and plants, inform her work. She explores varied metaphorical nuances, such as family, security, and comfort, in nesting sets. She holds a BA in English from Tufts University and a MAT from Simmons College.  She can be reached at elizabeth@elizabethcohenpottery.