Mess slices a fired sculpture from his Reclaim series on a diamond wet saw outside his home studio. Photograph by Erin Little, May 2015.

This interview took place on October 25, 2015 via Skype. It was transcribed by Heather Wang and edited for print by Elenor Wilson.

EW: Would you give us a little bit of background on you, where you live, who you are, and what you do, including teaching?

JM: Sure. My name is Jonathan Mess. I live in Jefferson, Maine, with my wife, Kate, who is a metalsmith and graphic designer, and our sweet little daughter, Josie, who is one-and-a-half years old. We’ve lived here for four or five years, and I’ve lived in Maine for about fifteen years. I originally came to Maine for a high school teaching job in 2000 and just sort of fell in love with it. I ended up going back to grad school in 2006 at SUNY [State University of New York] New Paltz, and that’s where I met Kate and convinced her to move back with me to Maine. She’s from Wisconsin—you can only convince a Wisconsin girl to move more north. I got a job in Portland, lived there for a couple years, and then moved up here to the mid-coast, where I now work at Lincoln Academy. I have all the local students, the children of lobstermen, farmers, fishermen, doctors and lawyers and gas station owners, and there are also eighty international residential students from all over the world. So we’ve got some nice diversity for being in the central coast of Maine.

Kate and I own a house, an old barn that’s been renovated, with a studio in the basement. We’ve been here for about five years. We love it here. It’s got a lot going on, naturewise, and for being in rural Maine, because it’s the coast, there are a lot of great restaurants in any direction, and great, interesting people, and the ocean and mountains, and the seasons change. We’re less than an hour from Portland, Maine, and three hours from Boston. So we feel really lucky to be in a wilderness area, with ocean and mountains, but have connections to the rest of the world. It’s motivating to have all that and still have a rugged, rural lifestyle.

EW: You said that you renovated an old barn for your studios? 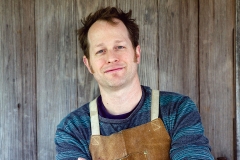 Jonathan Mess creates experimental works using reclaimed ceramic materials. An Ohio native, Mess received a Bachelor of Fine Arts at the University of Montana, Missoula in 1998, and an Master of Fine Arts in Ceramics at the State University of New York at New Paltz in 2008. He has been teaching visual arts with a focus on ceramics for over a decade. Mess has received several grants and awards, including the Maine Arts Commission's 2015 Contemporary Craft Fellowship, a St. Botolph Club Foundation Emerging Artist Award, a Ruth & Harold Chenven Foundation Grant, and selection as a finalist for the Society of Contemporary Craft’s Raphael Founder’s Prize in 2013. His work is in private collections and is exhibited nationally and internationally. Mess resides, works, and teaches in midcoast Maine.