What I Learned as a Studio Assistant – Shaping Life Through Art

Rae Stern was the first working artist I'd met outside of an academic setting. Up to that point, my experience of art had been from within the classroom walls. Most of the artists I knew were my teachers, who supported their art through an educational institution. I thought art was a space away from real life, cloistered in the walls of schools, galleries, and museums. As Rae's studio assistant, I began to imagine a creative practice built not apart from the world but embedded deeply within it.

Rae defined herself first and foremost as a conceptual artist. Ceramics was simply one of the processes she used to express her ideas. Being an artist meant having the freedom to explore many fields rather than choosing only one to master. With a background in psychology and technology, Rae approached art as a tool to deeply understand the world.

Rae was born in Haifa, Israel, and first studied psychology and communications at Tel Aviv University. Following her undergraduate studies, Rae pivoted to design, completing a master's degree at the Bezalel Academy of Art and Design. During school and the years that followed, Rae worked in high-tech environments and occasionally collaborated with artist Aya Margulis under the name Doda Design to create several bodies of ceramic work. In 2012, Rae emigrated to the United States, where she continued to develop her creative practice in New York.

Rae had been working on and off the project In Fugue for almost ten years by the time I was involved. The original idea propelled her to develop an innovative process with her collaborator Aya. With Rae's background in technology and Aya's experience as a ceramist, they discovered a way to embed photographs in clay using the translucent properties of porcelain.

Rae wanted to use the technique to explore the concept of memory through the photographs of Holocaust survivors, a subject laden with heavy personal significance. Rae's Jewish great-grandparents immigrated to Israel from Poland during the 1930s. The family that stayed behind later perished during the war. One of the few objects her great-grandmother had left to remember them by was a simple English teapot she'd brought on the journey. Although she passed it down, she couldn't share the loss it represented. Thus, years later, for Rae, the teapot contained an unknown part of her family's past, tangible only through stories and what was not said. Using the process she and Aya developed, Rae wanted to fuse prewar photographs with porcelain dishes like the teapot she'd inherited. Her goal was to capture both the ability of an object to hold history and its inability to tell it fully. 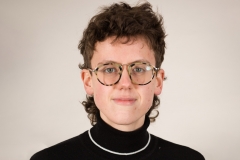 Elinore Noyes is a multidisciplinary artist based in Kansas City, Missouri. She attended the Kansas City Art Institute, graduating in 2020 with a double major in ceramics and art history and a minor in social practice. Elinore’s work as an artist encompasses painting, sculpture, design, photography, writing, and community organizing. In 2021, she joined the AmeriCorps VISTA program at Flourish Furniture Bank, a non-profit dedicated to providing free home furnishings to families experiencing poverty and houselessness. Elinore also belongs to the team behind Vulpes Bastille, an artist-run space in Kansas City, where she has organized several group exhibitions.