What Do You Want To Be, Clay?

Ask clay what it wants to be, and you won’t get a simple answer. Listen to clay, and you might hear it declare that it would like, more than anything else, to be fashioned into a slightly off-kilter, humble, and dignified tea bowl. You wouldn’t be the first to hear this, and you would be in good company. How many artists and craftspeople gravitate toward clay as a medium precisely because it is a material that presents itself as an alternative to contemporary technology? Simply having one’s hands in clay can engender a sense of serenity in an otherwise frenetic existence. Even in times of calm, it can be hard to get ourselves centered, and the present moment is not a time of calm.

Listen to clay again, however, and it may reveal to you a desire to be something else entirely. Clay does not wish to be pigeonholed. Clay may want, more than anything else, to be enigmatic and unknowable. How else can we explain the places where clay, whether raw or cooked, turns up? Ceramic material has clearly been moonlighting outside the pottery studio: on a satellite coiling around the earth’s atmosphere; on a battlefield, cast into dense military armor; in the grocery store, slipping into toothpaste and skin cream. We can agree that clay is multivalent, but how can we investigate where its own preferences lie? When clay finds itself among white-coated laboratory technicians rather than in an arcadian pottery studio, is it disappointed? Does it steel itself for an interaction that lacks creativity?

As clay describes the places it has been, maybe we can come to agree that clay can do anything, is comfortable in the context of craft, art, and design, yet also in engineering, material science, and computation. And if clay can move this fluidly, perhaps we can exhibit more fluidity as well—as artists, craftspeople, designers, engineers. And where would we move to, if we were to slip between art and science and computation and design? We might find ourselves in a hybrid space—part studio, part laboratory, working across, among, or against disciplinary boundaries. In so doing, we might ask ourselves, is this hybridization necessary? As a sculptor, potter, collector, critic, or curator, would the quality of your interactions with clay be improved if you increased your proximity to the tools and techniques of another discipline? 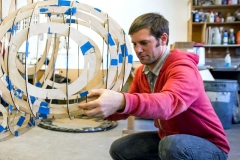 Tom Lauerman is an artist whose work presents an homage to overlooked or unbuilt architectural forms. An inveterate tinkerer, he develops experimental approaches to digital fabrication and computational design. Tom received his MFA from Cranbrook Academy of Art and serves as Associate Professor of Studio Art, Digital Design, and Ceramics at Penn State University.