What To Do When Life Figures *You* Out

I wasn’t supposed to graduate high school. At a very young age I was diagnosed with a neurological disorder that included frequent seizures (called petit-mal at the time and now referred to as absence seizures) that would cause me to lose time on and off through the day. And I had migraines, which caused me to miss a lot of school. As part of my life, I’ve also had to overcome difficulty hearing and speaking (aphasia and dysphasia), balance, and dyslexia. To be told you can’t do something can either be a deterrent or a great motivator, so obviously, I played several instruments, sang in choir, danced, and performed in theater productions. I did graduate with honors, though it took a little extra leeway from the school. I have never taken education for granted since.

In college, I started as a theater major before moving to the Spanish department, where I focused on theater and film studies in a foreign language. Since producing speech was difficult for me, why not try to do so in a foreign language? It was the most difficult major I could have picked, but also the most challenging and diverse. After I graduated, I went straight to grad school—partly out of fear of choosing a career path and partly to prove how very wrong everyone had been about my academic prospects. I didn’t know what I wanted to do with the degree, but I loved what I was studying, so I kept going.

Midway through my masters studies, I became restless. Spending all my time reading and writing, much of it on a computer squinting at articles scanned from old, faded books and bad photocopies, was not as fulfilling as I had thought it would be. I had loads of digital work, pages upon pages of writing and research, but it wasn’t feeling like achievement. The daughter of a carpenter, I grew up on a farm and was used to physical labor, the results of which are tangible. I wanted to do something hands-on. 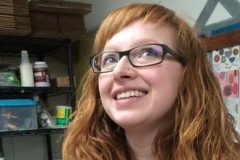 Amanda Barr (she/her) is an artist and writer currently pursuing an MFA at the University of Montana at Missoula. She is the founder of the intersectional art advocacy group We Are Not Invisible. Her work has been shown internationally, and currently deals with political and social inequality through historical references. Contact her at amandabarr@gmail.com and follow her on social media @amandambarr and @wearentinvisible.