Where is the boundary between two-dimensional drawing and three-dimensional form? Longtime friends - a sculptor and a potter – we find ourselves in the midst of the two, and we ponder the relationships that exist there. One thing that unites us is our love of painting. We both view painting as a primary source of inspiration, whether it is the decorative painting on Kutani ware, images by Giotto, or contemporary works by such painters as Thomas Nozkowski and Terry Winters. Yet it isn't that we want to make paintings; rather, we want our work to capture the illusory nature conveyed by these paintings. Exploring the boundary between drawing and three-dimensional form can draw out the best in each, allowing them to act in a complementary way, like hearing and seeing. Establishing relationships between the two stretches the freedom to invent.

Holly: I received my BFA in painting before ever considering clay as a potential material of expression. I first worked with clay on my own on a borrowed wheel, working in the dark. The tactile qualities of clay and the directness of touch won me over. In my early experimenting with clay, I painted layers of slips and glazes on my pottery surfaces, as this came more naturally than the potter's techniques of dipping and pouring glaze. Over time, I searched for ways to personalize my pots beyond the uniqueness of form and surface patterning. Drawing natural forms on my pottery, observed while walking, gardening, and cooking, wrapped my daily life into the pots. In work such as "Rhododendron, Stream" the drawing is applied over the form and is spontaneously conceived while glazing. The pot is the canvas, and the slip is the gesso.

Most of my pots are built from coils of clay that are pinched into form. It is an ancient technique that leaves a skin of dips and bumps. The texture is intrinsic to the process rather than applied to the surface. Delineation of this surface via drawn line provides a structural map over which the geography of the painting flows. The dimpled surface softens the drawing: a bold line running through the landscape of recesses appears as spontaneous as a child's doodle. A diaphanous drawing contrasts with the solidarity and gravity of the form and allows the movement of glaze to disrupt the line.

Recently, linear drawing has become more central to elucidating the directionality of a form, like an overstatement that defines the field of a plane. The drawing may be embedded in or overlaid on the surface, but it springs directly from the form and is conceived while building the pot. The line may even suggest a new spatial form, extending the boundaries of the concrete physical form.

Drawing on pottery keeps the pots grounded in ancient history (think cave drawings, Islamic script on pottery) as well as contemporary art. I choose abstraction when drawing because it is open-ended enough to present multiple associations to the viewer but succinct enough to tap memories. A drawing on a pot engages the eye graphically and makes one curious about what is on the other side. My tendency is to keep form simple and strong, calm and balanced. Color contributes exuberance, and drawing adds an element of the unexpected.

Linda: Painting on form is an aspect of ceramics that I have loved since my first wheel-throwing class. When I was a student in Betty Woodman's class at the University of Colorado, assignments stressed the complementary nature of form and surface. I wasn't particularly interested in painting or drawing on a two-dimensional surface, as the blank canvas was intimidating and didn't speak to me, but painting a clay object was another story. It allowed me to respond to the form and surface with immediacy and felt like a collaboration between myself and the object.

Although my work has changed a great deal since that time, my interest in the interconnectedness of painting and form continues to compel me and has led me to consider the differences between two and three dimensions. In graduate school I began taking out-of-focus pictures. I was interested in capturing things felt rather than consciously identified. I started making ceramic pieces based on the photographs I'd taken. The boundary between two- and three dimensions began to reveal itself. The world of the photograph is illusory and doesn't exist in three-dimensional space. In contrast, it is very difficult to make an object that is out-of-focus. I began exploring these differences in my work. In some cases, painted elements of my pieces became their own objects, as if a drawing had become three-dimensional. Another approach was to make large freestanding work and use it as a canvas to paint on. The surface painting generated new three-dimensional objects based on their illusory counterparts, and drawing on form became a way to generate new forms.

One of my favorite decorative motifs is something I call "clouds on a landscape." It explores the notion of a shadow being cast from somewhere far away and landing on a modulated surface. In keeping with this idea, I have begun conceiving of areas of color that originate as projected images. In this there is an element of the ephemeral. While a tree is physical and real, the shadow it casts is illusory, moving and changing over time. 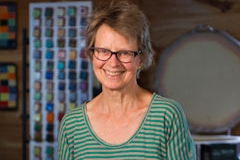 Holly is a ceramic artist and occasional educator living in Vermont.  She has taught at major art and craft schools, and served as Director of Watershed Center for the Ceramic Arts. Her work and thoughts have been widely published.

Brooklyn artist Linda Casbon constructs functional clay objects and large-scale ceramic sculpture and teaches at Pratt Institute and Hofstra University. She studied design and ceramics at the University of Colorado (BENVD) and ceramics at Kent State University (MFA). The boundary between two and three dimensions and the juxtaposition of physical and real versus illusory are important aspects of Linda's work.