The Use of the Volumetric in the Ceramics of Pablo Picasso

Of the many famous painters and sculptors who have decorated or even made ceramics during their artistic career, it might be fair to say that most of them came to the medium as decorators and that their output constitutes mere anecdotal episodes in the history of ceramics. Interest in their production is due to their reputation as fine artists, not its inherent artistic merit. Very few created new forms or invented novel images, especially as far as ceramics or the vessel-as-image is concerned. Their customary approach was to transfer singular, two-dimensional imagery onto ceramic objects without regard to their intrinsic volumetric structure. They simply treated the surface of the pot like canvas or another neutral ground, which it is not, at either the formal or conceptual levels. Paul Gauguin (1848–1908) and Lucio Fontana (1899–1968) are notable exceptions. And then there is Pablo Picasso (1881–1973).

What is so remarkable about Picasso the potter is his understanding and bold utilization of ceramics per se. For him, the medium was more than just another creative adventure. He was acutely aware that he was entering a distinct artistic space and specificity. His unique conceptual insight and his phenomenal grasp of the positive and negative space inherent in pottery forms set him squarely apart not only from his fine-art colleagues but also from the traditional approach to pottery making. The fact that his ceramic sculptures are not made using traditional fine-art techniques, such as carving, must be accounted for. With him, the exercise becomes an exciting intellectual assignment rather than a material or emotional preoccupation.

In this case, the everlasting art-versus-craft debate is absolutely an oxymoron; the former is the result of an intellectual endeavor, whereas the latter has to do explicitly with the making of an object. Art deals with the abstract, craft with the corporeal. With Picasso, the vessel becomes an abstraction of itself without losing its specificity. He is erecting three-dimensional images, not wares. (To be fair, I have to acknowledge that he also decorated a few dishes for the Madoura Pottery; these were not his major output and surely not his outstanding contribution to ceramics).

What differentiates the one-of-a-kind ceramics of Picasso from his other pottery forms (there are also edited series) is, on the one hand, the emphasis on the intellectual content of the ceramic image and, on the other hand, the brash creative use of the deconstruction strategy to engender innovative artistic solutions to image-making in the field. 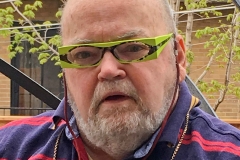 Montréal ceramist Léopold L. Foulem's distinguished career spans more than 40 years, with over 54 solo exhibitions and more than 230 group shows on five continents. His ceramics were exhibited in 49 museums, and are part of numerous private and public collections. Foulem has lectured extensively on the subject of ceramics as an autonomous art form. He is also a world authority on the ceramics of Pablo Picasso.