Many years ago when I was involved in a ceramics department open house at Maine College of Art, I took a student's dare to compete in the who-can-throw-­the-fastest-pot event.The little not-quite- centered cylinder I made (in about 18 sec­onds flat) was kept, bisqued, run through the soda kiln with a bit of coppery glaze on it, and now sits on a high shelf in my studio in Yarmouth, Maine. I kept it because it has qualities I am drawn to: the lively spiral, the sense of lifting, the unlevel rim. As all experienced throwers know, these are things that happen as a result of a par­ticular ratio of the wheel turning (slow-ish) to the pulling up of the walls (fast-ish), as well as of the clay being not quite centered to start with. Potters who choose kick-wheels often do so because of this, and potters who use electric wheels can usually create this ratio if they so desire. For me, becoming engaged with this liveli­ness of form meant starting to uncenter.

I have been a studio potter, making mostly useful pots, for about twenty-five years. For many of those years, I have also taught wheel-throwing part-time. It goes with­out saying that one must learn to center the clay before one can really control the rest of making the pot. For some people this happens fairly quickly, and for others it takes many years of practice. Occasionally a rank beginner comes up with a really lovely off-center form, more by default than by design. Yet those are the exceptions to the rule; most off-center early efforts look like just that: unwieldy, bottom-heavy, dumpy beginner pots. Only after the potter has confidence and control in his/her technical ability, and has then gone on to master the even more difficult choices involving form and surface treatment, will the work be truly successful.

In my own work over the years, I have thrown both tightly and loosely, depend­ing on the specific function of a piece, which glaze and decoration I plan to use, and my mood. Throwing loosely but on-center is different than throwing when the clay starts out a bit off. Architect Charles W. Moore developed an idea he called "loose fit" as "a set of images that are extensive and vague enough to have the chance of reminding someone of something. You have to have things familiar so that people will feel comfortable, and then a surprise to make familiar things seem more vivid than ever." 1 I want this notion to work in my pottery: the familiar is evident in the nature of the objects (recognizable as mug, bowl, vase, etc.) and the element of sur­prise (perhaps in my case understated) in the not-perfectly-round form, the unlevel rim, a mysterious decoration on the surface. I have found myself looking at the small, quickly thrown cylinder up on my shelf and deliberately not quite centering the clay. I have found that to do this successfully, to have the results look the way I really want, unforced, takes a little practice. I am talking very subtle here, visible and felt, but not too wild or wonky. When your hands are used to centering, not doing it is not so easy.

We have all seen either an illustration or a physical example of the cross section of the "correctly" thrown pot about I /4 inch thick, perfectly even, usually the sign of a good thrower. A skill to aspire to, and rightly so. But I was struck by Clary Illian's comparison of that cross section to the linear quality of Japanese calligraphy. She observes that walls of a pot should be viewed as lines in a drawing: they are more visually dynamic when they are not the same thickness throughout, but show variation.2 Although one doesn't see the cross section in a finished piece, this fluctuation is still revealed in the profile of the pot; it is not exactly the same on both sides at any given view. As I have attempted to throw forms with this in mind, I find that it is not as easy as it may seem. Exactly how much is the right amount of being uncentered? There is a fine but surely important line between a richness of subtle variation and clumsiness or death of form. M.C. Richards speaks eloquently of centering in relation to life in her seminal book, “Centering”. "When on center, the self feels different: one feels warm. In touch, the power of life a substance like an air in which one lives and has one's being with all other things, drinking it in and giving it off, at the same time quiet and at rest with­in it."3 This idea of the center as stability and power in life is full of merit. But she also says, "We do not need to be free of error to be in the midst of poetry. There is a mercy here, and a transformation in which one shares."4 I can earnestly aspire to live the "center" and feel the warmth and stability to which she refers. But maybe not always, or maybe not always in the exact center. Perhaps engagement and inter­est for me come when things are not quite spot on - perhaps when the slightly unexpected happens and adjustments must be made, and when spontaneous events or situations are welcomed, indeed invited. Just living life seems to be in cahoots with lessening of control. It's evident in all the Murphy's Law references, in having children, in moving or changing jobs. While changes like this can be stressful, they can also be cause for joy, rewarding and enriching. "On a one-ton temple bell/a luna moth folded in sleep." Commenting on these words by Yosa Buson, my poet friend Rick Benjamin remarked, "Change is like that: one moment you're as if settled in your life, the next a large bell is going to ring and in that sudden resonance you're winging your way to the next place. Maybe you won't pick a bell to light on next time, but, invariably, don't we always?"

I don't know yet where my current interest in throwing slightly "off" will lead. Maybe eventually, with practice, my uncentered throwing will happen more automatically - through my hands rather than my head - and my pots will be infused with a different vitality Perhaps the process must be more connected to frame of mind than intent, and cannot be sustained with all forms. Maybe, like other small adjustments we attempt in our work and our lives, or like the unknown change resulting from the object the luna moth lands on next, this one will morph into something else altogether, yet to be discovered. 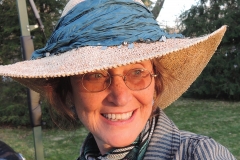 Marian Baker made pots in Wisconsin, San Francisco, New Jersey, and New Zealand before settling in Maine thirty-three years ago. She teaches part-time at Maine College of Art, where her students keep her on her toes. Baker loves the balance between her nine months of quiet studio time in Yarmouth and the bustle of her summer studio at Little Cranberry Island. She can be reached at mbaker@meca.edu, and followed on Instagram @marianbaker3710.