Un-Broken, Todd, September 19, 1994, Gearing up on a mini trampoline for a double front flip, but opening after 1.5, while listening to Longview by Green Day. Photo Credit: Lara Nguyen

Un-Broken: An Homage to Kintsugi

Just because I am broken, doesn’t mean I am not useful.

It was June 2018 when I first knew something was wrong. On a flight home from Prague after teaching a study abroad course, I was unable to urinate normally. In the tiny airplane bathroom, the interruption was as abrupt as a bowling ball dropped on a running garden hose. A couple weeks later I was in the emergency room. An ultrasound showed my bladder had grown to more than twice the size of any adult bladder filled to capacity. The tumor they found, which took an estimated year to grow in my uterus, was the bowling ball I had envisioned. I underwent a radical hysterectomy. Then, recovering at home, my husband and I got the call. My best friend played with our kids upstairs and we went into our office where we got the most reliable cell phone reception. Over speaker phone, we were given the diagnosis: uterine leiomyosarcoma cancer (uLMS), stage 1B with a 36% chance of recurrence in the next three years.

I met Todd Frahm in graduate school in 1999. I had a crush on Todd, but it was love at first sight with Rick, Todd’s sweet black and brown mutt who was wiser than the two of us glued together. I had just broken up with my boyfriend of eight years. I learned Todd’s decision to pursue an MFA had caused him to break off an engagement. When he had to go out of town, I dog sat for Rick – and I never really left. Twenty-one years and two kids later, we now live and make art in the Blue Ridge Mountains in North Carolina. He sculpts full-time and I teach at Warren Wilson College, an institution that has enthusiastically supported my art habit. We live in a house that art built.

The scar on my belly, left by nineteen staples, was fertile ground for a new body of work. Cleaning my new scar as it healed, feeling each staple being removed, marveling at how some of the raised dark skin was numb in places and had sensation in others… These ministrations conjured all the scars of my life, the ones on my body, and the others. 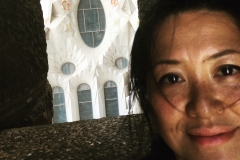 Lara Nguyen is an artist, educator and and co-owner of Stone Cloud Studio, which focuses on the pursuit of public art opportunities. As a first-generation Vietnamese-American, public television was an important early childhood influence. Growing up in the Midwest, the oldest of five kids to Vietnamese speaking parents, Sesame Street was her first ESL teacher and Bob Ross, her first painting instructor. Wanting to pursue art as a career concerned her immigrant parents who were worried about acclimating to a foreign culture and valued professions that provided more financial security. Nguyen knew at a young age that would she would be an artist. Today she and her husband, sculptor Todd Frahm, their two kids, Atticus and Moon, and her parents all live under one roof in Asheville, North Carolina.
Nguyen received her MFA from Southern Illinois University, Carbondale in 2002. She has been teaching at Warren Wilson College in Swannanoa, North Carolina, since 2012. In the last four years she has worked in a range of media and formats including painting, drawing, installation, performance, and photography and has completed eight public art murals in Asheville, NC and Grand Rapids, MI. Access to art is extremely important to her, "I want to contribute to a living and breathing museum for anyone and everyone, no matter their age, country of origin or socio-economic situation. I have murals, drawings, and paintings displayed in and on grocery stores, schools, hospitals, churches, businesses, galleries and homes internationally. I want to make art that honors the beauty of diversity, highlights the power of interconnectedness, and promotes inclusive conversation. Art is for all.”
Stone Cloud Studio