The following is a conversation with Mark Burns, Stuart Gair, and Seth Rainville, the Harvard Ceramics Studio Artists-in-Residence, 2017-2018. This panel was organized, moderated, and recorded by Kathy King at the Falmouth Arts Center, Falmouth, Massachusetts, November 19, 2017, then transcribed and edited for print by Studio Potter. The panel began with an invitation for the artists to discuss what brought them to the residency at Harvard; Burns spoke first:

Mark Burns: Well, once upon a time, way back in the Pleistocene…

There weren’t these residencies like there are now. They’ve become a way of life, for a lot of people. I was in a very aggressive program: you made art, and you showed it, and you became famous. But also, you should get a job that will allow you to make your work three months out of the year, academically. And I did that, and I followed all the steps, and then, one day, I woke up and I was running a huge program all by myself in Nevada, and I was the chair of the art department.

You can’t serve two masters, let alone three, so the very first thing to go was my studio. I just couldn’t get anything done. And it dragged on and on and on and on and on. I was exhausted by doing the same thing that Seth was talking about, which was writing incessant letters to promote other people into things. I had turned down many things over the years, as my reputation—or dis-reputation, sort of—grew, and I thought, I can’t do this anymore. So I retired out, an emeritus, and sold everything I owned. I thought, I need to go find out what this thing is about. I can’t reinvent myself if I don’t do this thing. Going to Harvard was a godsend because it was a destination, a worthy destination and I’ve learned a lot since I’ve been here.

Audience Member: How long were you doing regular work, compared to your creative work?

Burns: You mean regular work, like teaching? I would say sixty percent of my time was running that shop. I had a huge program of grad students, and I did it alone. I had no colleagues. Then, they made me the chair, basically because I was the onsite chair for the ’96 NCECA in Las Vegas. I’m the guy that made that happen. So the president went, “Oh, get him to be the chair. He’s pretty organized.” I begged not to be made the chair, and the last thing the dean said to me was, “I can appoint.” I knew I was doomed. 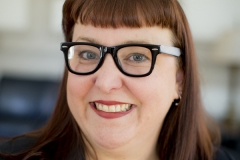 Kathy King is the Director of Education in the ceramics program at the Office for the Arts at Harvard. She holds a MFA in Ceramics from the University of Florida, and a BA in Studio Art from Connecticut College. Formerly an Associate Professor at Georgia State University, she has given workshops and lectures at more than seventy colleges, schools, and art centers throughout the United States. She can be reached at kathykingart@me.com, and follow her on social media @kathykingart.

Mark Burns, a MFA graduate of the University of Washington, has had a long and distinguished career as a teacher and maker. He has held teaching positions all over the country. He most recently taught at the University of Nevada, Las Vegas, where he was head of ceramics and chair of the department. Burns’s work has been exhibited nationally and internationally and is held in numerous public and private collections. Burns has a keen sense of ceramic history and pop culture, which he uses to express complex cultural notions of sexuality and identity. Burns can be reached at markburns0591@gmail.com, and follow him on social media @markburns0591.

Stuart Gair received his MFA in ceramics from University of Nebraska, Lincoln, in 2017, and his BAS in history at Ohio University, Athens, Ohio, where he also completed post-baccalaureate work in ceramics. Gair has been a summer resident at Archie Bray Foundation, Helena, Montana, and a Watershed Artist in Residence and Salad Days Artist in Residence at the Watershed Center for the Ceramic Arts in Newcastle, Maine. He can be reached at stuartgairceramics@gmail.com, and follow him on social media @stuartgair.

Seth Rainville is a potter, educator, and curator living in New Bedford, Massachusetts. Rainville received his BFA from University of Massachusetts Dartmouth. He has taught at multiple programs and was formerly the Curator/Exhibitions Coordinator at the New Bedford Art Museum. Rainville also serves on the advisory board of Watershed Center for the Ceramic Arts. Reach Rainville at sethrainvillehome@gmail.com, and follow him on social media @sethrainville.