In his Life Cycle Completed, developmental psychologist Erik Erikson uses the term "generativity," referring to the task as well as the responsibility of establishing and guiding the next generation.

I find myself asking how Erikson's concept applies to me. I have experienced a very full and satisfying career in ceramics.

I have followed my muse as a production potter, artist, educator, professional mold and model maker, and ceramic designer and manufacturer for more than forty years and am now the owner and curator of a gallery in Denver's River North Art District. While my intention is to continue working, the question remains: What can I pass on to the next generation of young makers? I have found the connection with two former employees from my manufacturing business, Brett Binford and Chris Lyon, who were able to use my knowledge and experience as a model for their own business in Portland, Oregon.

After completing my MFA in 1975, I spent many years as a production potter, providing hand-thrown and jiggered tableware to craft retailers. In 19881 took a much-needed break and worked in the ski and bicycle industries, first in Telluride and then Steamboat Springs, Colorado. After realizing the importance of doing what you love, I returned to ceramics in the early r990S. What I found was an anemic marketplace for ceramics. I needed to find a way to continue working in clay, and fortunately, I had some design and plaster-working skills. Through word of mouth and then some advertising, I began to make ceramic work for others by slip casting, hydraulic pressing, and jigger/jolly methods. Over the next sixteen years, I built Ceramic Design Group into a viable design and manufacturing business in a warehouse space in Steamboat Springs, Colorado.

Brett and Chris were employees during many of those years, and their hard work and dedication contributed substantially to the success of the business. They were ready and willing to learn everything I knew. I made it very clear that I did not know everything about ceramic manufacturing; what I did have was a sound grasp of materials and rudimentary knowledge about making multiples. My ceramic education had been academically based; the skills necessary to design and produce reproductions were unfortunately not part of that curriculum. My learning was really on the job: drawing templates and making elaborate setups to turn plaster, lathe-turning Ren-Shape styling board to build models, and making complete die-sets for the RAM press. As I increased my knowledge of the nuances of ceramic manufacturing, Chris and Brett were exposed to ways of using clay that were diametrically opposite to being a potter working on a wheel, making one-offs or limited editions. Even though they were of a younger generation, their academic ceramic education had also lacked any exposure to these manufacturing skills.

Concepts such as cost accounting, inventory control, profit and loss, human resource management, quality control, payables, and receivables, which can be applied to any manufacturing business, were also pretty foreign to me. Learning to use them in my business was challenging. I eventually hired an account ant and a bookkeeper so that I could direct my energies toward production of my clients' work.

Over the years I had many employees, but Chris and Brett were the ones who really took an interest in learning the business. They wanted to know everything about running Ceramic Design Group; all the technical clay and glaze information as well as business fundamentals. They were eager to learn how to make rubber blanket molds as a more financially viable case mold for slip casting, and how to specially reinforce the interior of die cases with welded rebar to minimize cracking on deep shapes. But they were also interested in how to run a manufacturing business: How do you price a project? How do you deal with an argumentative client? How to you retain a customer? How do you maintain a client's confidence in your manufacturing?

The informal sharing of information was a natural process to me. I was growing a business and happy to include employees in that growth, if they were motivated and interested. I was also willing to let others take ownership of a project while staying vested in its outcome.

Brett and Chris always stepped up. From their experience with me, they gained a different point of view about ceramics. Chris and Brett assimilated an approach to making clay ware that was "design-based" and not solely "makingbased."

Their sense of inquiry extended to the business side of volume production, especially cost accounting. Chris was quite interested, for instance, in a spreadsheet that factored in every step of making a piece. Provisions for many variables were included, and the result was a calculated price that I could charge a customer. Chris later went on to work on a degree in business as well as ceramics, before he and Brett started Mudshark. Brett had been dissatisfied with the academic learning environment, and when he started to work for me, he was quite intrigued with die making for the RAM press. Both of them understood that ceramic manufacturing was another way of working with clay, with its own learning curve, and while there was some overlap with the world of studio ceramics, it was quite different.

In 2005, Brett moved to the Pacific Northwest and started making slipcasting molds in his kitchen for several clients, while also working as a salesclerk and making RAM dies for Georgie's, the local ceramic supplier. During this time he saw a void in the marketplace that a local design and manufacturing company could fill. Chris moved to the area soon after; together they started Mudshark Studios in April 2006, in the basement of their home. They moved to their current location in 201 r and have developed a robust infrastructure for making work by slip casting or hydraulic pressing. In its seven years of operation, Mudshark has grown meteorically. Beginning in a small space with limited equipment, the company now provides 4,000 to 5,000 pieces per month from their i7,ooo-square-foot facility, serving twenty-five to thirty clients.

When Brett and Chris started Mudshark, their knowledge was untested in a manufacturing environment. As their business grew, Mudshark encountered many of the same problems that I had experienced years earlier. They, too, made mistakes, but as I had done, they learned from them and moved on. They reached out to others to expand their knowledge of materials and have learned a great deal to improve their bottom line. In 2012,1 spent some time with Chris during the Seattle NCECA conference.

After a long conversation, he paused and said, "Dude, I now know what you went through." It was as much a compliment as a statement of fact.

There are subtle yet important generational differences between how Brett and Chris operate Mudshark and how I operated Ceramic Design Group. I wanted to bring what I generically called a "studio sensibility" to the manufacturing process. I learned very quickly that I was really an industrial designer with a large repertoire of ceramic skills. I was manufacturing a commodity; it just happened to be made of clay. Chris and Brett understood this from the beginning. They will both readily admit that, as Chris told me, they have "come a long way from clay. A high production volume numbs your perspective about those studio values. We are developing a client-centered business, rather than a clay business."

Another difference was that I wanted little or no debt, so I self-funded Ceramic Design Group from savings. I had no business plan and just operated on a day-to- day basis, putting out fires whenever they happened. Brett and Chris, on the other hand, well understood the idea of "other people's money." They worked with both local and state business groups to gain access to loans; armed with a detailed business plan, they approached lending institutions to grow their operation. 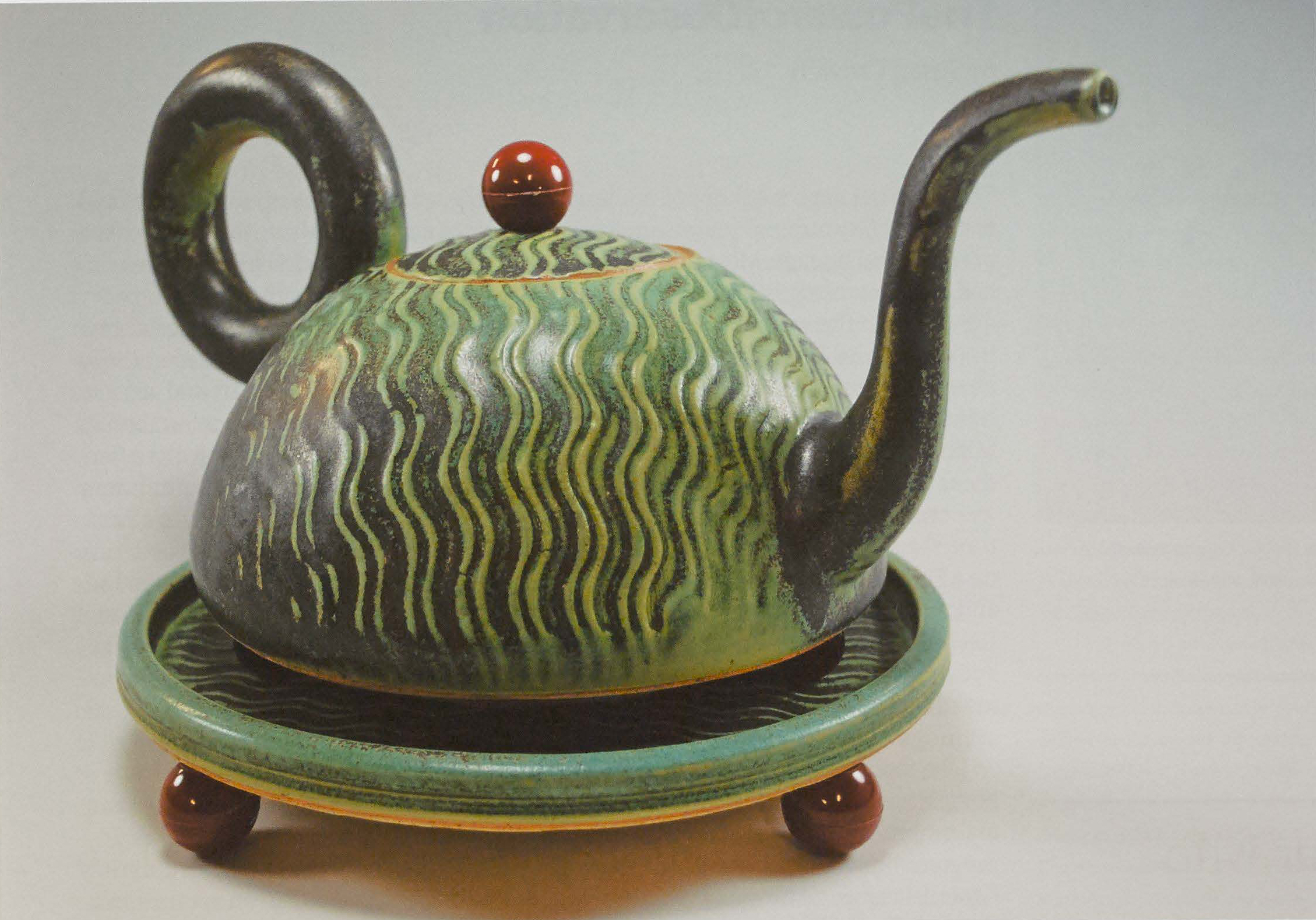 Their long-term goals include achieving financial stability, making sure they have some personal creative time, and having a viable business that can be sold or even franchised at some point. This will require that they step off the manufacturing floor and be owner-managers.

I by contrast could not separate myself from my business. Even with employees, I was very involved with every aspect of the production from start to finish. And as I essentially was  Ceramic Design Group, I did not have a business that could be sold. Perhaps this was, again, an effect of my studio sensibility. It took me a long time to understand that even though Ceramic Design Group was working within the ceramics culture and the culture of objects, it was a manufacturing business, driven by my clients.

Mudshark is certainly following a similar path, but with a more enlightened and focused approach. But Brett and Chris are also functioning against a different economic and aesthetic backdrop. Their generation of makers is not as enmeshed in clay as we were, and there may be other boundaries that, over time, Brett and Chris will need to redefine.

After fifteen years of operating Ceramic Design Group, I decided that making my own work was more important than designing and making ceramic work for others. In 2006,1 closed the business, moved to Denver, and returned to my career as a ceramic artist. I had never thought of myself as a mentor, in the sense of providing the seeds for others to grow something of their own. As a teacher, I can impart methods, facts, techniques, aesthetics, and theory. A mentor provides a larger context and becomes a guide. I did not know at the time that I was acting as Brett and Chris's teacher and mentor as well as their employer. Along with biweekly paychecks, I was "sharing it forward," empowering them and giving them the skills and information that would become the foundation for their own ceramic business.

In his wonderfully incisive book Steal Like an Artist,  Austin Kleon provides an informative and humorous read about the creative process. He writes that all artists take ideas from other artists as "source material." We make them our own through our vision, skill, imagination, and interpretation. Brett and Chris used the model of Ceramic Design Group as their source material. They have taken that learning, reinterpreted and pushed it, and expanded on it to fit their needs.

They built on it and created Mudshark Studios. They have always given me credit me for providing that learning experience and foundation. I am honored and privileged to be a part of this continuum, which begins with solid source material and a nurturing learning environment.

Kleon states: "Do good work and share it with people." That's a goal I can work with. 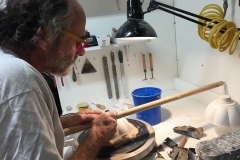 Jonathan Kaplan has worked as a production potter, university educator, ceramic artist, as well as a professional mold and model maker, ceramic designer and a manufacturer. He has written extensively for Ceramics Monthly, Pottery Making Illustrated, Ceramics Technical, Ceramics: Art and Perception, and Studio Potter. His work has been featured in the Lark Books series, including “500 Vases,” “Best of 500 Ceramics,” and “500 Teapots”.