I often think about how similar making pot­tery is to cooking. Recently I have been con­templating the parallels between the Slow Food movement and the way I like to make pottery. The burgeoning Slow Food movement of the past few years opposes the fast food that permeates our society, promoting the enjoy­ment of traditional food and cooking over the processed homogeneity of industrialized eating. Slow Food advocates promote using fresh, locally-raised and, if possible, organic ingredients, then preparing and enjoying those ingredients in an unhurried, mindful manner. I will borrow the name and dub my ideal in pottery-making Slow Clay, mean­ing using unprocessed and locally-obtained materials, working with less dependence on industrially-produced chemicals, minerals and energy, less emphasis on speed of produc­ing, and more on depth and richness in the finished pots.

"Yukkuri, tanoshiku" (slow down, enjoy it!) was my teacher's mantra, which he would blurt out spontaneously throughout the day. Tappo Narui of Mashiko, Japan was acutely aware of the perils of trying too hard and overpowering the clay and wheel. He tried to instill in his students a respect for the clay, the kickwheel and the fire as more than just materials and tools, but rather sources of creative potential.

What passes for clay in this country, the pre­mixed clay bodies in their hermetically-sealed plastic, seems to me the ceramic equivalent of Wonder Bread. Granted, it is convenient and easy to use, but it has little personality or local identity. I found a clay at the top of Hawk Mountain, three miles from my pottery, which I have been using in varying ways since 1988. This clay fires to a chocolate brown color with a crinkled texture where trimmed. It lacks plasticity and often slumps at my firing temperature of cone ten, but it is my clay and I love working with it. A curator from the Osaka Museum of Oriental Ceramics has told me it looks quite similar to some Karatsu clays. Over the years, I have found more efficient ways to extract the useable clay from the rock it is mixed with. I have also found another regional clay that complements it perfectly.

Since 2000 I have been adding Stancills clay to my Hawk Mountain clay. Stancills is located 74 miles due south of my studio, where the Susquehanna River flows into the Chesapeake Bay. The clay is fairly fine-grained and plastic, contains some silica rocks, and is quite refrac­tory despite its high iron content. When fired, it has a rich red/brown/purple color. Alone, this clay is a challenge to work with, but mixed with the sandy Hawk Mountain clay it becomes quite pleasant to throw. The clay absorbs water quickly as you throw and the high iron content means you have to be care­ful in the firing, but I can live with its eccen­tricities in exchange for its rich color and interesting interaction with my glazes.

The question arises: what is a good clay? Some potters probably think about plasticity and ease of wheel-forming, or firing without warping, slumping, or bloating. Some wood­fire potters may be more concerned with how the clay interacts with wood flame and ash. I prefer a clay with richness in color and texture, and if it comes with attitude, I try to accommodate it. I want to make use of what is available in my area if possible. Some difficult clays become quite useable by changing one's forming methods, for example, throwing with slip instead of water, or using softer clay.

Slow Food advocates encourage people to slow down and enjoy the process of preparing meals. A good cook usually has a favorite knife which feels just right and makes the work easier and more enjoyable. The tools a potter employs should also feel just right and be a pleasure to use.

For example, I find the Japanese kickwheel quite helpful for overcoming the shortcom­ings of difficult clays. Some of the clays used in Japanese pottery villages had their own quirks, and forming techniques evolved to deal with their difficulties. The Onta clay in Kyushu is quite short for example, so potters there utilize a lot of coil and throw tech­niques on the kickwheel. The slow rotation of this style of wheel and the ability to turn it in either direction make it very convenient for clays that don't stretch well. Of course, the potter has to get used to turning the wheel by foot while forming the clay. This may be seen as a drawback, but I like the motion and the rocking action. It's just more fun for me.

The tools we choose as makers serve in the transformation of materials, but tools work both ways - shaping the material and shaping the maker. The work habits, reflexive actions, strained or strengthened muscle groups and kinesthetic perception developed while using particular tools become part of the maker. I think of it as making the maker. As physical changes take place, such as your leg strengthening to accommodate turning the wheel, changes in perception follow and, I believe, an increased intimacy with the clay. I consider it a great privilege to work on wheels made by Tadao Arimoto, an artist­-woodworker from Pittsburgh. To work on wheels that are not only sensitive, durable tools, but also beautiful objects of art built by a friend is a great joy to me.

Just as it is important to start with fresh, wholesome, nutritious ingredients to cook or bake with, I have come to rely on several materials from the valley surrounding my studio as the basis of my glazes.

The first of these is a mixed hardwood ash. Our house is largely heated with a wood stove, which I think of as my glaze-making machine. The ash is put out in containers to be washed by the rain, then I wash it again thoroughly once, mixing it with water into something like a milkshake, and pass this mixture through screens into buckets where it settles into a slurry.

The second material I use is corn-stalk ash, which contains some silica and functions differently from wood-ash in the glazes. Corn stalks are burned in a contained enclosure and smolder for several days. The ashes are collected and ball-milled, then sieved. Twelve hundred pounds of corn stalks yield about fifteen gallons of ash slurry.

The third material I rely on is shale clay that is deposited in the creek running directly in front of my kiln. This clay is useful as a decorating engobe or as a glaze ingredient. I call it creek clay, and I calcine half of it when using it in glazes, or add twenty percent of the Hawk Mountain Clay when I apply it as an engobe to leather-hard ware.

The other main ingredient I use is feldspar. Small additions of silica, kaolin, bentonite, iron and copper are used just as seasonings, and are added to a stew to enhance flavor. These help me tweak the glazes to avoid excessive running and settling and to add color. These materials are purchased from a ceramic sup­ply house. I do not consider myself a purist and have no qualms about using these mate­rials in order to get what I want in a glaze or slip. But I believe it is more interesting to start with unprocessed materials, because they are a more complex mix of minerals and chemi­cals than the highly refined materials. It is the same thing with food: fresh fruits and vegetables will provide better nutrition than processed ones.

Firing is not something to be rushed through as quickly as possible. The Thanksgiving ritual of spending all day cooking the turkey and side dishes is more like my idea of firing: gathering with friends and spending all day (or two) enjoying the undertaking. The mem­orable Thanksgivings in my life have been as much about preparing the food with people you enjoy and care about as sitting at the table and partaking of the meal. My firings, which take place twice a year, have been made possible by the friends and family that gather kiln-side and work in concert. It may not be gourmet cooking, but the warmth and camaraderie can be felt, and the opportunity to interact with the powerful flame leaves an impression on participants. It may look like a party at times, but there is serious work going on and the experienced stokers know that good timing and focusing on the flame is para­mount.

Combinations of clay and glaze are enhanced by firing in a wood-burning kiln at a slow rate of heating and cooling. Just as food grilled on a barbeque will retain the smoky flavor of the fire, my pots may have subtle markings and flashing resulting from the interaction between flame and clay. Because the glazes are mostly ash, the wood ash that accumulates on a pot during the fir­ing usually melts into the applied glazes and is not always evident, but the subtle changes are there. My clear ash glaze often becomes almost a celadon by interacting with the iron from the clay body, and my corn-stalk ash glazes over an iron-rich creek-clay glaze can produce an iridescent surface due to the alter­nating oxidizing/reducing atmospheres. I am not firing with wood to get a "wood-fired look", but to get the richness and subtleties of the fire embedded in the pot itself, not just on the surface.

I believe that using materials from a specific place means that the pots contain the essence of that place. The pots reflect the mountains (where the clay comes from), the forests (where the wood ash comes from), the fields (where the corn stalks come from), and the rivers (where the creek clay comes from). I understand there is a deep respect for the local character of wines in France, and that a certain region will produce a wine with specific flavors and characteristics due to the climate, soil and other geographic conditions. I believe pottery can be appreciated in the same way if the materials used are taken from a specific area.

As a student of ceramics in the United States during the 70s, I think my training can be boiled down to this: the job of the potter is to use clay, glaze and fire to express his/her own creativity by displaying originality and uniqueness. As a student in Japan in the 80s, I was taught it is the job of the potter to use his/her skills to express and bring out the character of the clay, glaze and fire. The often­ quoted holy trinity ofJapanese ceramics is "tsuchi, yaki, waza" (clay, firing, technique) which indicates their order of importance.

I see successful potting, like great cooking, as a collaboration. You have to start with good ingredients to come up with a satisfying result. The result isn't just a conceptual con­struct, but a thing to be savored and enjoyed that can nourish and satisfy on multiple levels. I hope my pots are aesthetically satisfy­ing objects that carry a feeling of where they come from and how they came into being. Thinking of the potter's art as Slow Clay brings into focus an idea that is certainly ancient but hardly antiquated: namely, using what you have at hand to make beautiful objects which exude a sense of generosity and place. Slow Food served on Slow Clay may offer a much-needed respite from our fast-food culture and the frenetic pace of our lives. 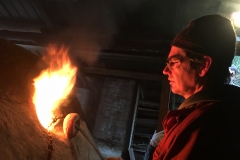