A paramour of mine once called me a secret badass. At the time I was at Central Washington University. She, like so many others, was surprised to learn that I was a combat veteran spending his post-army life studying philosophy and fine art. As one of my professors at CWU, Stephen Robison, pointed out to me, I have always been a jack of all trades, driven to the ends of the earth by curiosity and a foolish sort of longing for my own versions of the adventures of Huck Finn and Tom Sawyer.

I have lived in Washington, Montana, Louisiana, Kentucky, Missouri, Kuwait, Iraq, Spain, Germany, France. My art education took me from Seattle east to Ellensburg, Washington, where I completed fine arts and philosophy degrees at Central Washington University, and then to Montana State for my MFA. As I pursued my art career, Joseph, Oregon, became home. There I spent three summers at the LH Project residency and met members of the Dirty Canteen, a collective of artists who served in the United States armed forces, as well as artists Alessandro Gallo and Beth Cavener. I spent a year working with Alessandro and Beth at their Studio 740 in Helena, Montana, a creative space I miss dearly.

Currently, home is the small mountain town of Idyllwild, California (it seems I’ve never been able to stay put). I head the sculpture and creative technology departments at Idyllwild Arts Academy, a residential arts high school. I spend my days teaching young students how to work with their hands as well as to think divergently about their art and problem solving. I find some difficulty in teaching sculpture to a generation saturated in technology from such a young age—many lack fundamental problem-solving skills and any ability to work with their hands. I was raised building tree forts, taking apart tools, and romping through forests with wooden swords. I find now that my own childhood was one that lent itself to being an artist. I love the challenge of bridging the gap between technology and craftsmanship in helping students learn to engage their artistic voice, while struggling to find time to employ my own. 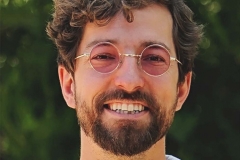 Daniel Donovan is and artist and U.S. armed forces veteran based in the small mountain town of Idyllwild, California, and heads the sculpture and creative technology departments at Idyllwild Arts Academy, a residential arts high school. Donovan has undergraduate degrees in philosophy, with an emphasis in ethics and in fine art, and earned his MFA from Montana State University.