A Rediscovery of Self Through Art and Travel

Finding a central theme for my work was actually not what I was trying to discover during this trip. I had thought the one thing I wanted to retain from my undergraduate work was the depiction of Black folk living. I thought it was important to see Black folk on pots, dancing, loving, teaching, and playing, because I felt our life and joy was not something you expect to see on pots with depicted narratives. However, by the end of my museum and gallery tour around the east coast, I learned a lot about my interests and desires as an artist through the work of contemporary Black artists. In DC, I visited the Smithsonian National Museum of African American History and Culture (NMAAHC), which was a giant fount of information, top to bottom, left to right. I saw a lot of culture, history, and artwork that piqued my interest, but Kenya Robinson’s sculptural headpiece of combs, Commemorative Headdress from Her Journey Beyond Heaven, really spoke to me. I was fixated on this piece longer than any other. For me, it spoke so much about Blackness without having to yell it. It showcased the importance of hair in Black culture, and the investment we have in the upkeep of our hair. Maybe that had to do with the context of its being on exhibition in the NMAAHC, but it was not playing to the White audience. Robinson’s piece was not influenced or guided by the White gaze, the White audience, or White thought. You either got it or you did not. The confidence the piece held was what I wanted my work to hold. In Philadelphia, I witnessed Sonya Clark’s pieces, also relating to Black hair, the beautiful, eye-pleasing COMB QUILT (as I thought of it; officially it is titled Whole Hole), and a typewriter with hair wrapped around each key, WRITER TYPE. Clark’s works spoke the same dialect as Kenya Robinson’s.

After much thought, I decided the theme of my work also had to approach Blackness with the same confidence, devoid of catering to White thought. I also noticed during my trip to various museums and galleries that centered on African American art, history, and culture, that Black Queer culture was hardly ever mentioned. With these realizations, the voice of my work evolved into the interiority of Black culture through my experience as a Black gay man. I have begun to accomplish this by making work that examines and celebrates Black body and hair. Like Robinson and Clark, I make use of combs and hair, but I add moisturizing products into the equation in hopes of making a more cohesive narrative of Black hair and body care. Lotion, specifically, has deep roots in contemporary Black culture because un-moisturized Black skin is visibly ashy, and being ashy around Black folk, especially as kids, was grounds for getting teased. This relationship with moisturizing products has also found its way into contemporary Black social culture where being ashy becomes code for being ignorant or annoying. Cocoa butter or shea butter is typically associated with Black women since they are more open about their use of these products than Black men. I have not seen art include moisturizing products in this conversation about Blackness, so I thought it would be a notable contribution to the narrative. However, I knew these motifs were not enough and had to figure out more than just my theme.

Form mattered because form was what I was hoping to change the most about my previous work. I made vessel-inspired art, because I related the ceramic vessel to the body and thought of it as a way to discuss human form without needing to show the viewer the human body. The Smithsonian's National Museum of African Art is where I found the most appealing forms. I noticed that most African pots had rounded bottoms with a stand, in contrast to Greek pots, which mostly had feet, or Chinese pots, which commonly had flat bottoms. This distinction felt important for me to emulate in my work as a descendant of West and Central Africans. By transforming the flat bottoms of my forms to rounded bottoms and finding creative ways to include stands, my work became more informed by African ceramic practices. Other forms throughout the museum that made significant impressions were busts, zoomorphic forms, and functional combs, which all have found ways into my work. There were a lot of combs throughout the museum, some gold plated, some with elaborate patterns, some with animals topping them off, and so many other unique forms, reminding me of the various combs Black folk own, depending on what needs to be achieved in terms of hairstyle. I wanted to make sure I incorporated a variety of combs that Black folk own, and potentially begin to create my own forms of combs I place within my work. 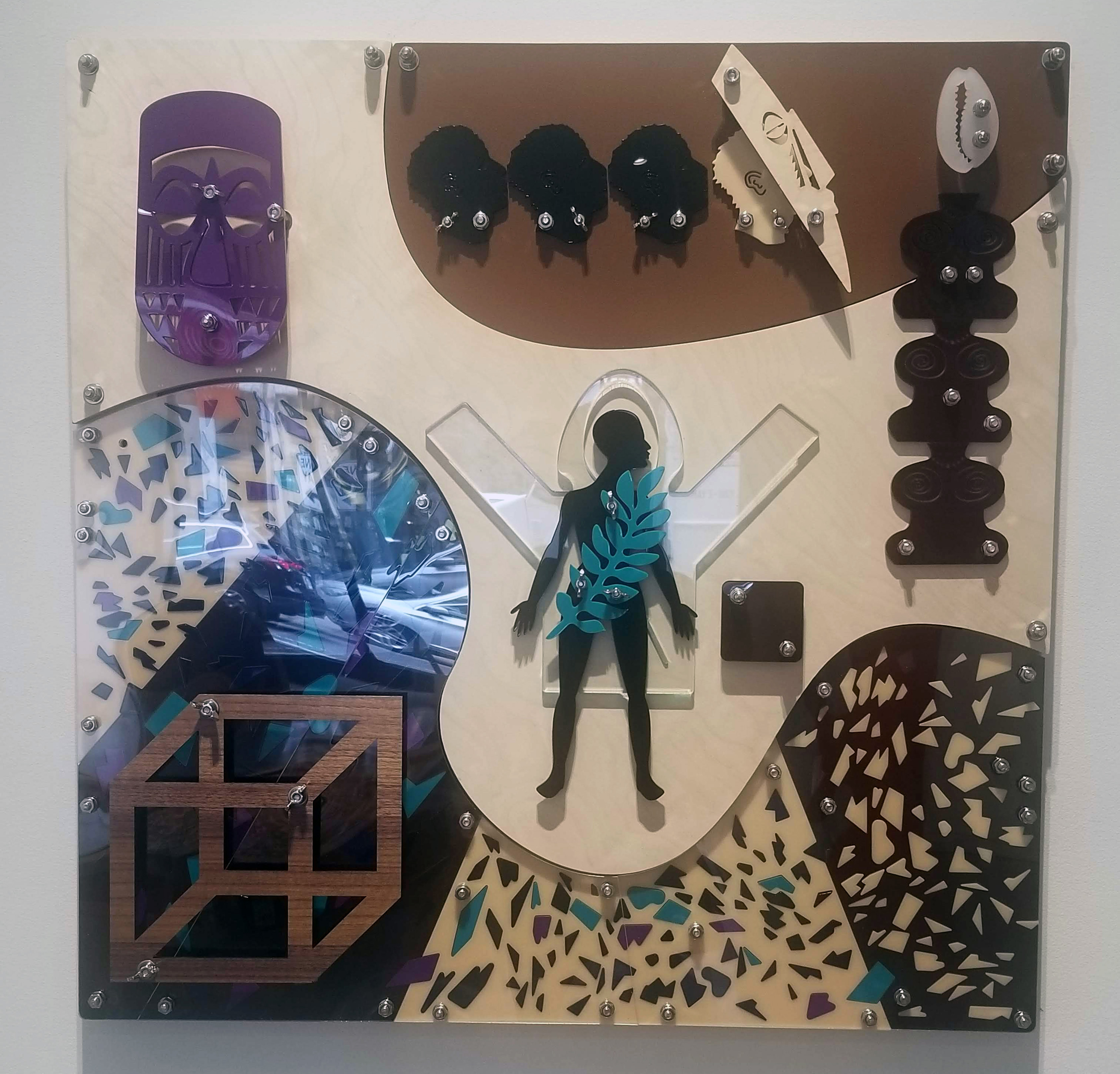 The patterns on my sun urns were inspired by the quilts of Gee’s Bend and other Black quilters. They continue to inspire me with how spontaneous and free the patterns are. When I got to see Gee’s Bend quilts in Richmond, Virginia, I was ecstatic. However, actually seeing them in person, I took something unexpected away from the experience. The quilts I saw had stains and holes. I was in awe at the honesty in the quilts. They were not neatly pressed or cleaned because the fabric came from repurposing old clothes, blankets, and fabric – stains and all. I thought the uncleanliness that you see up close added value to the quilts. I wanted to discover how to leave evidence of my humanity in my work as they do. This resulted in the surface that is prominent in my work. Instead of smoothing out my surfaces, as I previously did, I have begun to leave the evidence of the hand so people can see my touch, the motion and life in the building of the piece. The surface has possibly become my favorite part of the process thanks to the Gee’s Bend quilters. 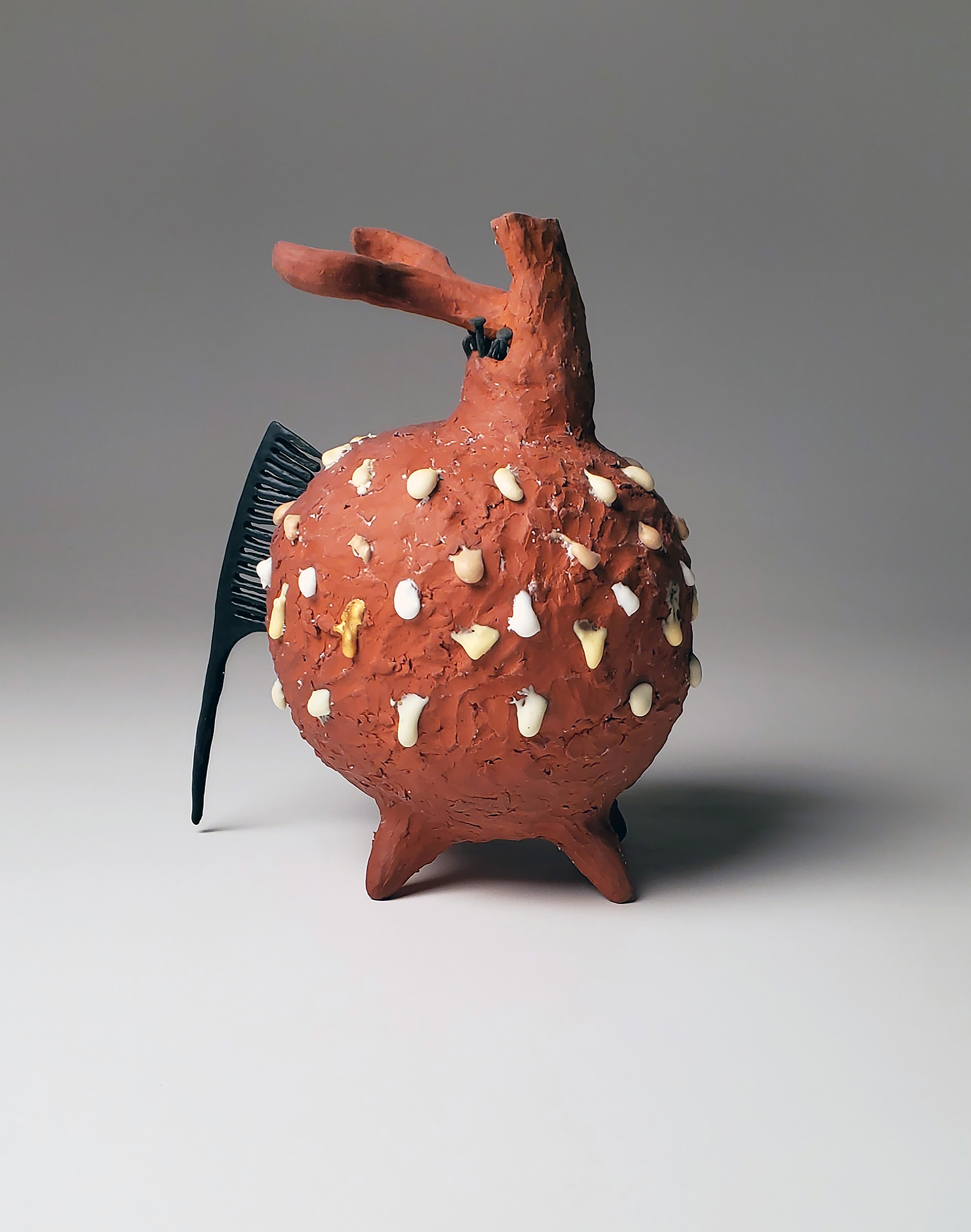 Lastly, the journey transformed my use of symbolism. Prior to these travels, my symbolism was loud, in the viewer’s face, with the chains representing slavery, the figures representing Black folk, or the patterns inspired by quilts. However, I wanted my work to become much quieter in terms of symbolism. I discovered how to do that, through the work of Damien Davis, a Black gay man who had a solo show in the Center for Art in Wood in Philadelphia. His work is colorful and loud (similar to my sun urns), but his symbolism plays with both discrete and obvious codes for Blackness and Queerness. His approach to telling unique narratives within each piece, using the same symbols, inspired me to consider a handful of symbols I would like to use for creating unique narratives. Considering the zoomorphic forms in the Smithsonian's National Museum of African Art, I began to develop my own iconography: buffalos referencing Black masculinity, gazelles referencing Black femininity, sheep referencing Black queerness, and rabbits referencing Blackness. Davis’s work also inspired my repetitive use of combs and nails, and my decision to make a variety of glazes to reference different moisturizing products. With his work in mind, I am hoping to find new ways to narrate the interiority of Black culture both discreetly and overtly. Some parts may be obvious, like the use of my own hair or combs in the work, while others are more discreet, like the meaning behind the lotion glaze or the use of each zoomorphic form.

With the COVID-19 pandemic, I lost access to working in the studio before my school semester ended. Even though I do not currently have access to a kiln, I am still able to create comfortably and freely in my home. Without the stress or expectation of having to constantly make “good art” while in school, I have been more experimental with what I make, revisiting the pictures I took during my travel research. I noticed my fixation on art objects that I previously had no deep connection with – namely, the BENIN HEADS from the Smithsonian's National Museum of African Art and the FACE JUGS made by enslaved African Americans from the NMAAHC. This fixation has led to an interest in making a contemporary iteration of a Black sculpted head. Ideally, a loose self-portrait that allows me to find new ways to make use of the motifs I developed through my trip, like having dripping lotion on the face, or placing a comb in the hair. 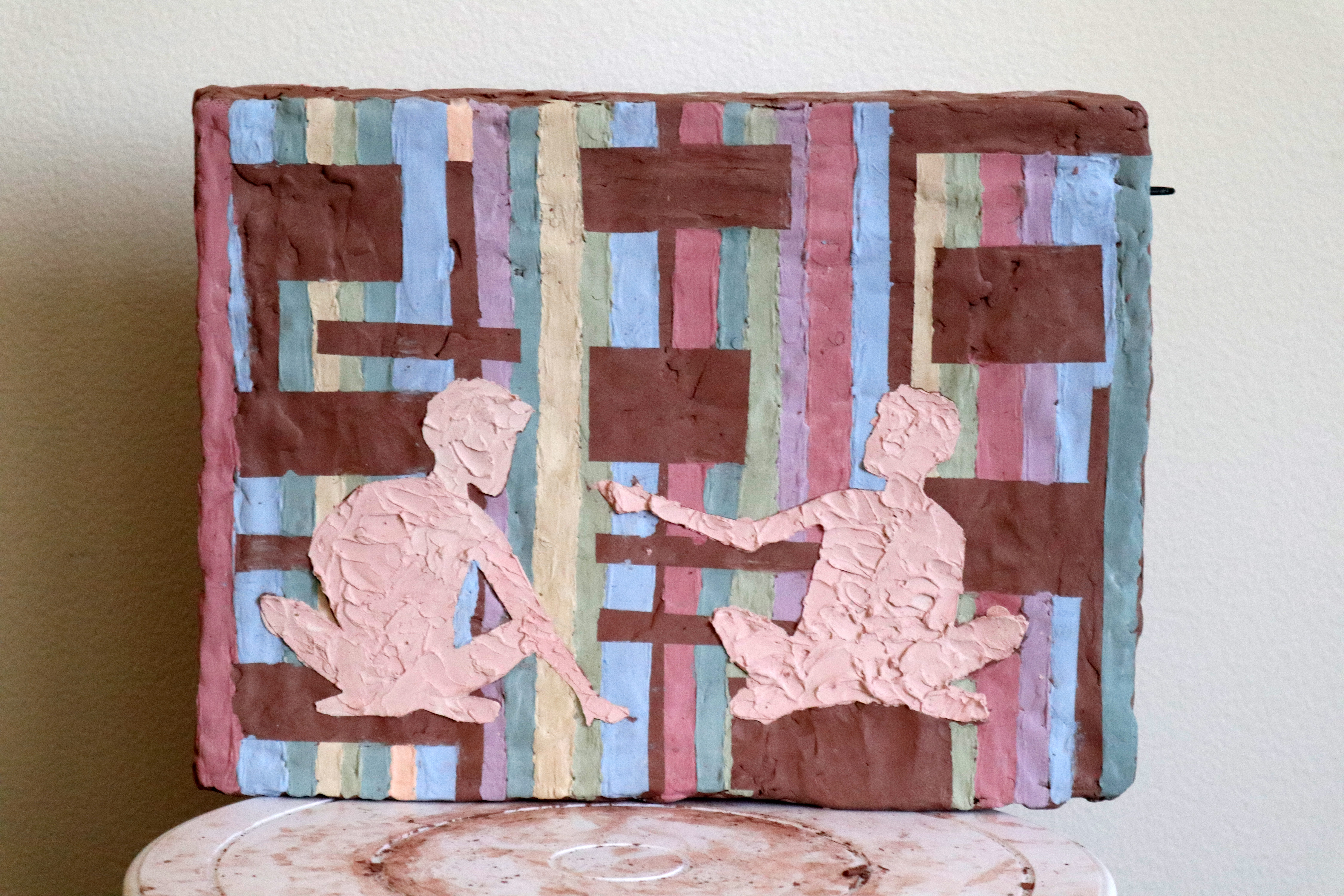 I have also begun clay paintings, studies of how I could potentially use the lotion glaze to make figures. I am investigating ways to make use of the product Luster’s Pink Oil Moisturizer Hair Lotion, which has a pink tint, as the base for Queer narratives. This idea comes from the color pink being considered a girl color; as a kid, my classmates would assume any boy who wore or liked pink was gay. I was called gay by my peers as early as first grade, and I think that reality led me to openly love and wear the color pink as a kid. Luster’s Pink product is a popular hair lotion that was used in, and still is by some, Black households. As a Black child, I used the product.

My work continues to evolve as time goes on. The Warren MacKenzie Advancement Award from NCC was integral to this foundational journey. I am also grateful to my current ceramic professor, Tyler Lotz; the faculty; and my peers here at Illinois State who have helped me reimagine my work. I am excited to continue to discover and play with my work, making it more personal, but also more relevant to Black [Queer] culture. I invite you to follow along and support my growth as an artist as I continue to challenge myself and look for new ways to make use of the symbols and knowledge I have created through my travel research.

All photos provided by the author. 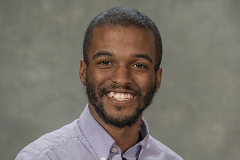 Aaron Caldwell was born in Fresno, California. He graduated from Southern Illinois University, Carbondale with a BA in studio art in 2019, and is currently in the MS in art education graduate program at Illinois State University, Normal. In his studio practice he focuses on narrating and highlighting his experiences of Black and queer culture. Caldwell plans on helping create and sustain engaging art programs in Black and Brown communities, in hopes of encouraging these communities to pursue art as a field of interest or personal hobby.