Porcelain: The Transformations of Alice Mermaid

Although a small town might have been more fun, growing up in Philadelphia offered many benefits. I went to Saturday morning art classes at various art schools and haunted the Philadelphia Museum of Art's galleries as often as possible. When I started Art School I wanted to be a painter. I learned Academy style painting, underpainting and overglaze techniques . . . even how to grind my own paint! Painting from the same nude model for a five week period soon became boring, however, and I gradually started spending most of my time at the pot shop. I still painted, though, and often painted on my pots.

When we had a production studio in Ashfield, Massachusetts, during the mid 60's, it would have been extravagant to do much surface decoration, since we expected to make a living. So for a long while utility and function and speed of production were my priorities. It was very good training. We came back to Philadelphia in 1966 and Bob (my husband) started teaching at Tyler. We built our studio, and then we had a baby.

I think it is important for me to make at least some mention of the change in my life that having children produced. I had already made the commitment to be a potter and was determined to continue, no matter what. That compulsiveness has been a help — and a hindrance. First, I have to admit that having a child is, after all, the total acceptance of one's femaleness; in part as a result of this, my work started to change. I changed through these "female" feelings, and also because studio time became very precious. If I had only limited working time I wanted to make special things. Changing from stoneware to porcelain is one way in which I have allowed being female to emerge in my work.

The clay lends itself to the sort of sensuality I am after and makes a fine canvas to draw on. The production background that I had has been a great influence, however, and although I give myself the freedom to do what I want, the pieces are still containers for use. I think the rituals of clay — making, using, containing — are all tied up with a sort of magic. After all, the only need for these hand-made things today in this super-technical society is to transmit a sense of humanness, a spiritual awareness to each other. If an object is made with a sense of its maker's spirit, it can create, when used, a very special kind of intimacy. I believe that if each of us, working in clay, makes one really strong statement during our life as a potter, then the total contribution to this time in history will be astounding!

I have been gathering these thoughts the last few weeks, and it always seems to come back to this: I work in a very intuitive way, I draw a lot, I read when I can, I look a lot at the trees and earth. But when I go to the studio, the clay seems to take over. Lately I've been having two images in my head: one is the smooth whiteness, hills and valleys of the porcelain landscape, the other is the complicated, highly decorated surface with dragons and monsters and crazy flying-fish ladies.

The involvement with the box, which is a vehicle for my sculptural and decorative ideas, presents some questions. People have asked, "Why open them?" Since I consider myself a potter rather than a sculptor the idea of containment is always present. What can be, or is, inside becomes important. It adds a sense of mystery. After all when I look at the hills, I wonder what's under it all. I don't mean just the rocks, but the inside, the core, the center of the earth that keeps us all together.

When I was a student, we had a great anthropology/primitive art course, and each of us had to do research into the art work of a particular culture. I chose Hopi Indian pottery. In the course of my research, I discovered that the women who made the pots often "dreamed" the designs they painted on their pots. Or if they found an old shard and needed to copy that design, they "dreamed" the missing parts. That really made an impression on me, and I have learned to listen to my dreams.

One of the most important dreams I have had was a dream of a room of Victorian opulence, complete with ladies-in-waiting and the Queen herself. The next morning I realized that my search for an effective means of texturing clay lay in the lace collars and petticoats of those lovely ladies.

Using dreams as the basis for creative work is something which interests me very much. Jung talks about this at great length in "Man and His Symbols," and Chagall's paintings are good examples of the sort of fantasy which comes from dreams. Chagall's use of "floating" figures comes close to my own spacely feelings. For me, being an artist means to be in touch with your own self and to produce work which reflects a personal image and view of your world.

I have been working with porcelain for several years now and don't think much about its peculiarities. The myth that it is difficult to use stems from the industrial tradition of casting and making forms very thin. It does have its limitations. But once these are recognized, it becomes just another clay to explore. It cracks if it dries unevenly or there is too much stress in the firing. It sags if the walls on large pieces are too thin and too precarious. I have lost a lot of nice pieces because at times I have chosen to be adventuresome. When I am careful and take time to build things right there are no problems at all. I am not particularly concerned with thinness or translucency. If I get some translucent areas on a piece that's fine. But my main reason for using the clay has been its smooth whiteness, its lack of spots and its potential sensuality.

The forms that I have been making have almost all been handbuilt. If I throw on the wheel then sections are added which are handbuilt. When I make a box I usually start by drawing, impressing texture and moving the clay around on what will be the top section. I have learned that a strong structure will hold up better in the long run and so take a long while to prepare all the parts and join them carefully. The sections are leather-hard, and can be handled easily before construction begins. All edges are carefully scored and put together with water. To make sure they won't come apart, I run a coil of clay around the inside joint. This coil is generally much softer than the slabs; and because I believe in magic, it doesn't crack.

After the piece is all assembled, I spray it with a mist of water and cover it tightly with plastic to allow the moisture to distribute evenly throughout the piece. The piece stays covered for a few days; but if it's very humid, as it often is here in Philadelphia, I can uncover it faster and let the drying start. Weather has a lot to do with that sort of problem. The process of construction is slow and painstaking if it is all to stay together. I began to wonder if I really wanted to keep working this way. But there was, at some point, an awareness that it was really not tedious but in a funny way pleasurable to do all those neat and orderly flanges. I usually work on five to ten boxes at a time depending on their size.

I fire in a 40 cubic foot, soft brick, downdraft kiln with propane gas. I like to reduce porcelain and feel that the slight blue or gray tinges that the fire gives enhances it more than the warm white of oxidation. I like the possibilities of celadons and bits of copper red. A long slow reducing atmosphere works very nicely in my kiln. I have used a variety of sulfates and oxides for color and recently started using Mason underglaze stains.* These work amazingly well and even in reduction maintain most of their colors. What I am after, in terms of appearance, is a soft water color feeling, the sort of color which is subtle and emphasizes some of the textures rather than being the strongest aspect of the piece. In order to achieve other colors, I often add low temperature lusters to areas but try to keep the pearls and pale colors. I have on occasion been seduced by gold and silver and used quantities but I'm not sure that being that bold is where I'm at right now.

Last summer we built a clay extruder. My idea was to be able to make a lot of small boxes quickly for possible production. It works fine for that purpose, but I found that I am more interested in exploring other ways to use the shapes, like making multiples, related forms, and so on. Usually I don't care for machines but about two years ago, I got a Brent slab roller and it has saved me hours of energy.

I am including herewith my clay formula which varies from time to time (if I run out of wollastonite I use pyrophyllite, etc.). It is basically the famous Grolleg clay formula that Warren MacKenzie developed. I have tried other clays but this one works well for me, and since I'd rather make things than do extensive experimentation, I'm content with it. The variations come from trying to control cracking and shrinking in handbuilding. It throws beautifully too. 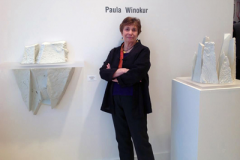 Paula Winokur (1935-2018) lived and worked in Norristown, Pennsylvania. She received her BFA from Tyler School of Art, Temple University, and was Professor Emerita of Acadia University in Glenside, Pennsylvania. Her work is influenced by specific sites in the natural world and has been exhibited widely in national and international collections.