I have spent the last twenty years researching, teaching, and making from an aesthetic based on maximizing the use of indigenous materi­als. Recently, I spent time thinking and writing about these issues during studies for a Master of Art Design and Environment degree finished in 2004. It is easy in ceramics to have such an approach tagged as rustic, Leachian and full of nostalgia. I wanted to put my approach in a more contemporary context, and to do so I chose to look back at the historical and philo­sophical basis for my making before I moved forward.

What I realized was that the influences on my making were based on Japanese aes­thetics, albeit translated, modified, and often misunderstood by Western practitioners and writers. Those influences could just as well have been African, American or European; I don't think the geography here is as important as the aesthetic framework. Japanese artists create in an aesthetic framework that values highly expressive work, which seeks to har­monize with nature and natural materials. Their relationship with materials is reciprocal, and craft processes are intended to be both poetic and natural.

In Europe, unfortunately, the thinking that framed this aesthetic was rejected by a lineage of Western philosophical thought stretching back through Kant and Plato to the early Greeks. Western aesthetics privileges human superiority, and in so doing justifies the increasing manipulation and exploitation of the natural world. It is an aesthetic based on non-engagement, on the separation of humans from the rest of the natural world, and it embodies the concept that only by dis­interested observation do we become capable of receiving aesthetic satisfaction.

Out of these conflicting influences arises another problem for the potter, that of useful-ness. Here a crucial difference between Japanese and Western aesthetics is starkly drawn; one seeks the expression of beauty through use, the other has sought to defend beauty against the incursions of utility. Trying to make forms blending utility and beauty, I find myself drawn to an aesthetic that seeks synthesis rather than one that promotes antithesis.

I have started to term what I do place-based making, and see it as part of a wider creative stream that engages with the natural, physi­cal and narrative resources of place. My think­ing draws on a more recent twentieth-century branch of philosophical thought, phenome­nology, which focuses on place and the lived response to it. After all, this is how we came to have the rich diversity of craft-making throughout the world: a vertically integrated aesthetic of materials, skills and processes expressing local culture. This approach can be as modern as it is ancient, and provides a locally-based alternative to globalised, designer-driven industrial ceramics. Interestingly, our position now as individual makers is in some ways not so different from what it was early in the last century, when people like William Morris and Bernard Leach sought a creative response to the relentless and dehumanizing pressures of the Industrial Revolution.

My aim was to focus and intensify my search for a natural, fluid integration of stim­ulus, materials and process. The sculptor Andy Goldsworthy has spoken of his art as a way of learning, of understanding, and his ephemeral work as a way of "breathing in." In a similar way, during field trips, my research method was that of a reflective wanderer, as I started recording poetic and photographic responses to the fragments of stimulus that caught my eye and framed my daydreaming. These visual and written reflections became my journals. It was from this recording of stimuli - my poetics of wandering- that the decompressive breathing-out of ideas began to develop.

After participating in field trips to various parts of my island state - to quiet and wild places in national parks and to the devastated and denuded environments of mining sites on the rugged west coast - I decided to bring this reflective wandering home and to look in more detail at the nearby environment of southeastern Tasmania. On the edge of the southern ocean, this is a place of eroded cliffs, refracted ocean swells, rock stacks, and the natural and human-imposed patterning in the tidal lagoon in front of my workshop.

It is a place where wildness exists relatively unmasked by a thin layer of human imprint­a space between the constructed urban envi­ronment and an idealized mythic wilderness, where the cyclical forces and dynamic pat­terns of nature can still be felt.

Now, as I develop form and surface, a con­nection to place is there. Often in the back­ground lie the forms of history, usually but not always pots, mostly from the diverse traditions that use indigenous materials in a synthesis of utility and beauty. This is a soft murmuring undercurrent, providing a link to a history of making and using that I value highly. Then there is the impact of place that slowly and subtly permeates. Collecting and processing materials for clay bodies and glazes, as well as gathering, cutting, and stacking black wattle to fuel my kiln, offer a chance at every stage to respond to the matter of place.

Beneath the black wattle bark lie the sinu­ous trails of burrowing grubs, and I make clay stamps from these to use in impressed repeti­tive patterns. The patterns of sun and wind on water and sand may be echoed in rope­impressed patterns made from debris found on the shore; tool marks overlay these pat­terns just as the gridded patterns of oyster racks imprint the lagoon's tidal surface. The eroded edge of a concrete water tank suggested the jagged eastern skyline seen from my work­shop and ended up in the altered edge of serv­ing vessels. The fluted ridges on scallop shells and the negative space beneath a water-round­ed dolerite boulder on a nearby beach also feed into the mix.

At home my place-based approach is based to a high degree on the resources I have close at hand: black wattle for firings in the wood kiln, feldspathic sandstone, dolerite, granites, and wood ash for glazes. However, when I teach and travel, place-based making means using the tangible, visual, and narrative raw materi­als of place in an expression of culture - an approach that can be equally applicable in an urban porcelain factory or a rustic craft retreat. While my home environment allows me to operate at maximum making-depth through a range of local materials, responding to place can happen on many levels, each with the potential to influence form, surface, and decoration. From vernacular architecture to abstracted landscapes, from industrial arti­facts to the surfaces found in nature, not to mention the stories of lives, a rich and varied resource is always there.

Through testing, I try to discover the potential of materials, individually and then in simple combinations. All glazes that I test are wood-, gas- and often electric-fired, and while there is an emphasis on wood-firing for its connection to place and the unique trans­forming potential it holds, this is only a part of my approach. Testing in different kinds of firings is a way of allowing materials to reveal their full potential and in so doing to suggest form and surface possibilities - an approach very different, even oppositional, to that of manipulating refined industrial materials to get a particular glaze or surface. The same glaze may be fired in different ways, each revealing a different facet and potential use. Often it takes time, after sensing the potential of a glaze, to develop a form and surface to sympathetically carry that glaze - a synergis­tic search for an integrated expression. In many ways my time of study led me back to beginnings - to trying to use materials simply and directly, as close to their existence in nature as possible. It has meant looking again at clay, shale, sandstone, dolerite, aplite, granite, wood ash, and ochre, and to question whether I had seen and understood their potential.

To use refined industrial materials is to work with materials processed for a high degree of consistency, purity, and predictabil­ity- not necessarily the foundations for artis­tic growth. Does using local materials offer a different experience for both maker and user? Certainly for the maker I believe it does. For the user, it is in the story of matter and mak­ing that an expression of both place and maker unfolds. Users carry away a utensil that resonates strongly with their connection, however brief, to this place and time - a link through form, surface, and materials.

Technological change, evolving design culture, and the increasing impact of global­ization all mitigate against appreciation of the sustaining links of spirit that place-based making offers. Place-based making is holistic not fragmented, regional not global, and inti­mately connected to place, not disassociated from it. For me, all this can be conveyed through the potency of utensils. Through their engaging intimacy of scale and simplic­ity of purpose, they offer a connection to the immensity of existence in the world.

as the weathered crust of earth

of wind and light on water.

print on a natural curvature.

of ebb and flood,

in a gliding dance of sustenance. 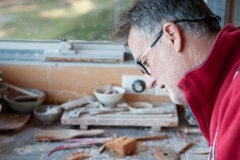 Ben Richardson lives on the coastal edge of Tasmania, the island state of Australia. Over thirty years ago he swapped fiberglass and the ocean for clay and fire. Since then, as owner of Ridgeline Pottery, he has journeyed in place, exploring place and purpose through wood-firing and designing tableware for some of Australia’s leading restaurants. Richardson can be reached at ridgeline@bigpond.com, and followed on Instagram @ridgelinepottery.