A Perspective on Computers and Clay

It started early. In 1968 or so, my best friend and I got permission to use the DePauw University computer at night when it was idle. That’s the DePauw computer; they only had one, an IBM 1620 with far less memory than your smartwatch. It used punch cards, and we wrote simple programs that used up all the memory at times. A couple of years later, when I was at Lawrence University majoring in physics, I learned more Fortran on a teletype terminal connected to an IBM 360. I was solving physics equations, nothing exciting, but in the process I learned the logic of how programming works.

In 1970, after my freshman year of physics, I fell in love with the wonderful plasticity of clay through a summer job making ashtrays for a potter. I’d always enjoyed making, tinkering, creating, but I found that what I loved most was working with clay, making objects with my hands, firing kilns. I switched my major from physics to art and ceramics. Then I fell for salt-glazing, at the 1972 National Council on Education for the Ceramic Arts (NCECA) conference at Arrowmont School of Arts and Crafts. After college, I had no computers in my life. I spent ten years as a salt-glazing studio potter before heading to graduate school at Indiana University Bloomington.

Fast-forward almost twenty years from the IBM 1620: I purchase my first home computer, a Macintosh 512, while teaching ceramics at the University of Wisconsin Madison. Around that time Albany Slip was becoming unavailable, and wanting to make substitutions for it, I wrote a simple glaze calculation spreadsheet in Microsoft Works that took easily twenty minutes just to load from 400-kilobyte floppy disks. When Apple offered an upgrade to a Mac Plus in 1988, I got my first copy of HyperCard (an easy-to-use, English-based programming language) with the updated computer. In four days I had developed the first very crude but working version of HyperGlaze, the educational glaze calculation software that I’ve been writing and re-writing for the last thirty years.

I moved to San Diego State University to teach in 1989, and having the first computer in the Art Department, I began envisioning using digital design, including 3-D modeling with clay. Joe Molinaro had started the ClayArt Listserv (the origin of that chat group) around 1992, right after the Internet opened to the public. The Listserv was one of the first steps toward making computer use more common in ceramics studio practice, at least as a vehicle for discussion. 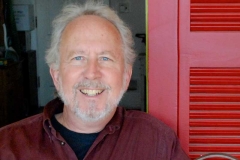 Richard Burkett is an emeritus professor at San Diego State University. He’s the author of HyperGlaze software, and co-author of Ceramics: A Potter’s Handbook, and Mythical Figures & Mucawas: Ceramics from the Ecuadorian Amazon. He and his wife, Nan Coffin, live and make pots in San Diego.