Using paper clay, I design forms in simple, primitive structures representative of the human form. These forms’ simplicity is necessary for applying other pictorial elements on the surfaces using digital prints. In the body parts of the figures, I’ve made the textural traces of the paper clay explicit, while in the facial parts where decal printing is used predominantly, I’ve avoided these textures.

I select visuals from faces and eyes of figures in European paintings of the Renaissance and Baroque periods, and using the computer, I re-create them digitally. In manipulating some of these images, I changed only the color tones; in others, I altered the images drastically.

In “Man in the City Series," I aimed to establish a relationship between the ceramic surfaces and the Renaissance period paintings used in the face of the figure. Through digitization, I’ve emphasized the cracks that have appeared on the oil painting over time, and matched the image tone to the colors of the raw clay body. I manipulated the edges of the digital prints applied to the body of the figures to appear old and ruin-like. 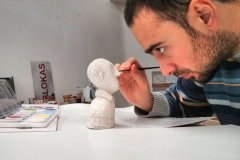 Sanver Özgüven was born in Eregli, Turkey, in 1983. He has a Bachelor of Arts in ceramics and a Masters of Fine Arts in graphic design. In 2011, he earned a second Master of Arts from Canakkale Onsekiz Mart University focused on ceramics and CAD programs. After studying ceramics in Lithuania, Özgüven earned his Ph.D. at Hacettepe University in 2017. He is an assistant professor at Necmettin Erbakan University, Konya, Turkey.