Kansas City in 1974 was a wonderland. That year was the first time I’d lived in an urban environment, the first time off the East Coast. In my foundation year at the Kansas City Art Institute, the city was my resource for finding subject matter and gathering found materials to use in diverse projects in drawing, making sculptures, and performance. This first year in college, during which I rarely touched clay, was a powerful influence on my art, not least because of the many hours I spent walking and biking through residential neighborhoods and the often poor and decaying business districts of Kansas City. I began to observe what, for me, was unusual decoration on the facades of many older buildings – patterns, colors, forms, and motifs I had never seen or at least never noticed.

I gradually came to realize that I was looking at fired, and sometimes glazed, clay on these buildings – it was my first intimation of the formidable history of ceramics in architecture. I was familiar with the history of vessels and had been seduced by them and by the tactile and responsive nature of clay, yet here was the larger vessel, the architectural structure, often made partially or wholly from bricks. The surface was sometimes veneered by tile and relief that encompassed – on a monumental scale – the vessel’s fascinating elements of containment. It was this direct experience with viewing and even touching ceramic ornament on Kansas City buildings, which I later learned was called architectural terra-cotta, that launched my investigation into clay as both a decorative and structural element of architecture.

I left Kansas City in 1980, and didn’t return for sixteen years. Now, I often drive or walk by my favorite terra-cotta haunts (though many have been razed). In their ornament, I see the point of departure for almost forty years of art-making. I see in its pastiche of styles a lineage of history and culture that reaches back through Europe – predominantly Muslim Spain – to the ceramics of the Middle East. 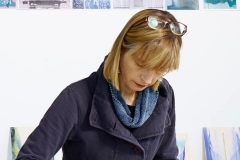 Cary Esser’s sculptures indulge the materiality of ceramics and draw on the history of architectural terra cotta. The North Carolina native has served as Chair of the Kansas City Art Institute ceramics department since 1996. Esser and her students and colleagues were presented in Season Two of the PBS “Craft In America”television series, broadcast in 2009. Author Portrait by Alistair Tutton