When I attended the NCECA conference in Seattle in 2012, was nearing the end of my first year of graduate studies. I harbored many ideas, fears, and apprehensions about the next two years. The first night, I met our professor emeritus, Donna Nicholas, and was determined to make a good impression. When she asked me about my work, I was overflowing with new ideas and began by stating that I had made the switch from pottery to figurative sculpture. "Good!" she exclaimed. Just as I was ready to unleash all my ideas on her, she continued by saying, "Make bad work." Caught off-guard, I laughed uncomfortably. She took a sip of her drink and reiterated, "Just keep making bad work, and eventually you'll make good work." At the time, I was able simply to agree with her. Of course I would make bad work. I didn't believe that everything I made was going to be perfect, or even passable. I knew I would have failures along with successes. But I didn't know how important it would be to allow myself to make - or even actively pursue making - those failures.

A perfectionist at heart, I planned every inch of each piece. I didn't trust the viewer or allow for any mystery in the work, because I needed to know that whoever looked at that piece would know exactly what I wanted them to know, at first glance. When I left the reunion that night, there was no question in my mind that I was going to make good work. I knew it would be a long journey, but when I thought about what would lead to that destination, that ultimate point of becoming a good artist, I didn't allow myself to think about the bad work that would pave the way. I felt good admitting that it would be there and that I wouldn't like everything I made. But that's where it stopped.

My first year was a slow crawl. I had never worked sculpturally with clay before, and having attended a very strict religious undergraduate program, had never been allowed to work with the nude figure. Encouraged to try something new, I immediately started by sculpting nude women. I have always been drawn to the figure, and having the freedom to take it seriously was intoxicating. Simultaneously, I was learning about feminism, agency, sexuality, gender identity, and many more concepts and theories for the first time. Enthusiastic about all these new learning experiences, I desperately wanted to stuff everything into each sculpture I produced.

This need for a deep narrative concept drove each piece I created, but the further I pushed it, the stiffer the work became. I entered my second year with many grand ideas for a gallery show but no ability to carry them out. After months of making and struggling, I finally produced a show that fit my carefully constructed artist's statement, but I fell far short of success. Afterward, I tried to listen to each critique with an open mind, but I felt defeated. All I could see was that I had spent a whole year and a half trying to make one" really good show.

I remember sitting in my studio, staring vacantly at the clay scraps, slip, glue, flocking, glitter, and paint strewn across my studio. As I cleaned up the aftermath of preparing my candidacy show, all I could think of was the frenzy of those last few days of fighting with my materials. If a piece hadn't cracked, it had exploded, melted, or died some other horrific clay death. I had kept working without addressing the problems that caused those failures or trying to find solutions. These realizations mingled in my head with feedback from my critiques until I couldn't think straight.

For some time after, I worked in what felt like a brainless way, relying on familiar fairy-tale narratives to produce what were, in effect, three-dimensional illustrations. I was tired, and the work wasn't what I wanted to make in the long run, but I decided to try putting concept and theory on the back burner. Awkward and unfamiliar with this new approach, I kept moving forward.

Near the end of my second year, I still didn't know what "my work" looked like. With less than half a semester and one summer left before my thesis year, I was running out of time and feeling that all I had to show for my efforts was failed or bad work.

I don't know what finally clicked (or snapped, depending on how you view it) at the end of that semester. I would love to say that a moment of sheer genius consumed me, and I made a deliberate decision to keep making bad work. In reality, I gave up trying to make successful work. I realized that since returning to school, I had rarely allowed myself simply to work. I would plan out every detail and then kill myself trying to make the piece just right. So, I did something new. I approached the clay with the understanding that I might make work that would crack, blow up, melt, or simply look awful. And that was okay.

In the studio, I went at things in a reckless, almost fatalistic way, making puppets, animals, humans, hybrids, zoomorphs, dolls, conjoined twins. My studio started to look like the workshop of Geppetto-turned-Frankenstein. I researched things I had been fascinated by but never let into the work I showed to others. I stopped trying to fit my work into this genre or that mold, to find labels for what I was making. I stopped trying to label myself. Working this way became a sort of personal excavation. With each piece, I took a giant step away from the work before - sometimes forward, but often backward. Still, no matter what direction I was headed in, I was going somewhere. The more I made and the more I explored new themes, the more I found myself as an artist.

Creating bad or unsuccessful work doesn't scare me anymore. Each piece gives me the opportunity to learn how to make something better. I am constantly building on my own aesthetic and technical vocabulary. And the work is becoming more genuine and honest. Whether it's good or bad, it's mine.

Right now, my studio is full of failed work, bad art, and pieces that are headed for the dumpster as soon as I've learned what I can from them. I'm still not sure what "good work" means, exactly. It could mean making work that sells or gets me into shows and galleries. Perhaps it's work that clearly communicates the concepts I'm interested in. Or it could be work that promotes change, that's provocative or complex. It could simply be something that's not "bad." Maybe it's all of the above; I don't know yet. I do know that my work is more authentic, honest, and aware than when I started, and that's what makes it feel closer to good work. 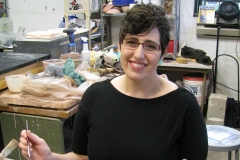 Jocelyn earned her Master of Fine Arts in Ceramics at Edinboro University of Pennsylvania. Previously, she completed a year in University of Florida's Post Baccalaureate program, worked and studied for two years at Penland School of Crafts, and earned a Bachelor of Fine Arts from Bob Jones University. She works and lives in Red Lodge, Montana where she spent two years as a Long-Term Resident Artist at Red Lodge Clay Center. Currently, Jocelyn is Part Time Adjunct Faculty at Northwest College in Powell, WY.