The Maker as Superhero: Social Change Through Making

The 2017 summer conference at Haystack Mountain School of Crafts in Deer Isle, Maine, was titled The thing that makes the thing: Conversations on craft and community. Haystack has held summer conferences since 2007 and although I had never been to one, this theme intrigued me. What is the thing that makes the thing, I wondered, and how did it relate to craft and community?

The four-day conference brought eight presenters and fifty participants together to consider issues related to socially-conscious craft practices. In his opening talk, Haystack Director Paul Sacaridiz told us that Haystack has “a tradition of radical craft education,” dating from the school’s formation in the wake of the closing of Black Mountain College in 1956. As the conference proceeded, presenters (makers, educators, and scholars) shared not only how their life experiences inform their craft, but also how they all, in varied and dynamic ways, react to social and political events locally, nationally, and globally through their craft practices. Afternoons were dedicated to small, hands-on workshops in which we learned each presenter’s techniques, and how they think about what they do. Every day of the conference one presenter gave a morning talk prefaced by a personal narrative that provided common ground for the presenters and audience. The entire conference was a bounty of conversation, with excellent food sprinkled in as added flavor.

Because presenters were engaged in various ways and to varying degrees in facilitating social change through craft, I began to think of creativity as empowerment; I began to view it as a superpower of sorts. Through making, people have agency in their ability to create something new, or at least a new iteration of a thing. For some, the next step is to use this ability to produce or alter social dynamics with an eye toward social justice. In fact, comic book heroes and the conference’s makers share many attributes: extraordinary abilities (like flying or making goods from raw materials); motivation through moral responsibility; a fighting spirit; commitment to a cause without expectation of reward; unusual courage in the face of adversity; and origin stories that relate directly to their evolution as heroes. Though Marvel might never greenlight a blockbuster about them, these activist-makers have an exceptional capacity to create goods and systems designed to right wrongs. 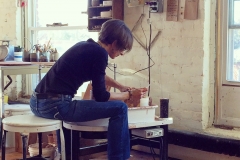 Natania Hume is a potter and teacher in western Massachusetts. She is the designer and maker of Slow Studio, a line of contemporary functional ceramics. Hume teaches at The Williston Northampton School, which is an independent boarding and day school in Easthampton, Massachusetts. Hume can be reached at Nataniahume@gmail.com, and followed on Instagram @slow.studio