Living Ceramics: The Art of Vivika and Otto Heino

Coming Home: The Ceramic Art of Vivika and Otto Heino, featuring works from the Forrest L. Merrill Collection, is on view at Colby-Sawyer College in New London, New Hampshire. The opening reception is August 2, from 5:00 to 7:00 p.m. in the Center for Art and Design’s William H. and Sonja Carlson '56 Davidow Fine Art Gallery. The opening reception and gallery exhibition are free and open to the public. This exhibition is co-organized by Colby-Sawyer College, Forrest L. Merrill, the Hopkinton Historical Society, the League of New Hampshire Craftsmen, and with special cooperation from friends of the Center for Art and Design.

Potters and educators Vivika Place Heino (1910–1995) and Otto Heino (1915–2009) were part of a generation that redefined the art of ceramics by blending Asian, European, and American traditions in the post-war era. Their work epitomizes the mid-century New Hampshire and California studio crafts movements, and a new exhibition, Coming Home: The Ceramics of Vivika and Otto Heino, at Colby-Sawyer College, New London, New Hampshire, celebrates their legacy. Coming Home features forty-five works from the Forrest L. Merrill collection and earlier examples of Vivika Heino ceramics from the Hopkinton Historical Society, some of which are on view for the first time.

Vivika and Otto Heino met in 1948 in Concord, New Hampshire, where Vivika was working as the assistant director of the League of New Hampshire Arts and Crafts. Founded in 1932, the League would, in time, become one of the most recognized craft organizations in the country. Vivika had recently moved to New Hampshire from New York City, purchased land on Briar Hill Road in nearby Hopkinton, and commissioned craft advocate and architect David Campbell to design a home and studio for it. She had already been working in clay for more than a decade. Most of her early pottery was cookware and commissions for Boston and New York architects. She had studied diligently, understood glazes and clay bodies, and had even filled orders from such prestigious retailers as Marshall Field’s in Chicago. 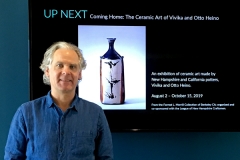 Jon Keenan is a potter based in Elkins, New Hampshire, and teaches ceramics at Colby-Sawyer College. In his work with ceramics, he explores Raku, glazed stoneware, and wood-firing. Jon is the recipient of numerous fellowships including Fulbright, New England Foundation for the Arts, and New Hampshire State Council on the Arts, and exhibits his work throughout the United States and abroad.