"I photographed this on the first day of the war. Now the black funnel covers all of Ukraine" - Oleksandr Miroshnychenko

A Letter from Ukraine 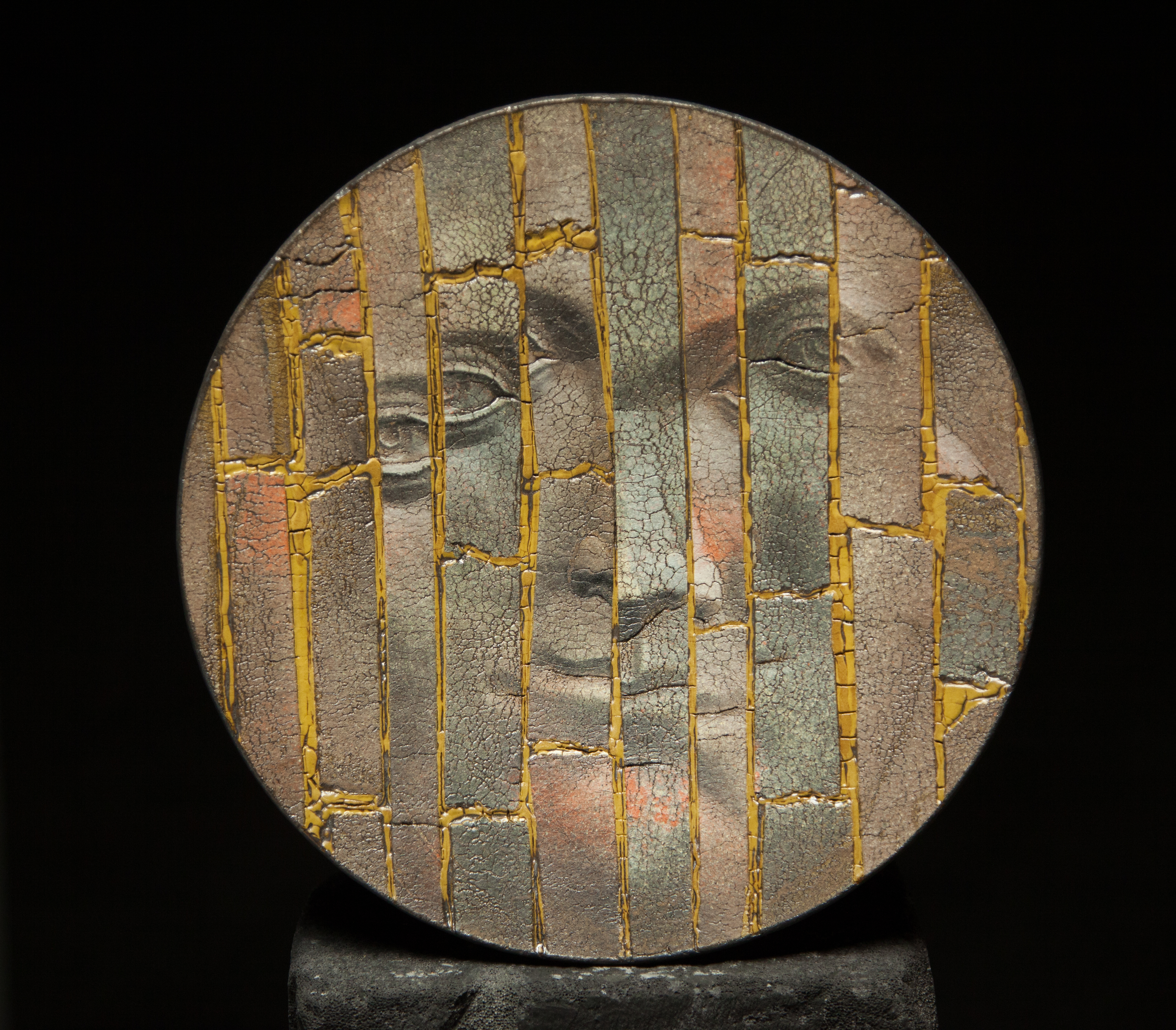 On February 24th, at about five o'clock in the morning, we were awakened by the sounds of explosions. As the sun rose, the smoke from the explosions became visible. The nearest detonations were about two kilometers (one mile) from our house. I live with my wife and two young children in a private house on the city's outskirts. I conduct my work from home, and my workshop is adjacent to the house. Since the Russian attack, Ukrainian families, citizens, and people are dying every minute. As of March 2nd, 2022, the United Nations Human Rights Monitoring Mission in Ukraine recorded 752 civilian casualties in Ukraine.

My family and I live in Chuhuiv, a small town about twenty kilometers (twelve miles) from Kharkiv. Our town experienced several missile strikes on military targets and infrastructure, as well as on urban areas where civilians were injured or killed. I have two small daughters, who are three and eight years old. The eldest goes to school, but the schools have been closed since February 24th. We spend the whole day patiently and intently waiting for the sounds of sirens or explosions. When we hear the air raid warning sirens, we run to seek shelter in our cellar. I have taken our basement cellar area, which was used to store vegetables and food preserves, and equipped it with additional electricity, a heater, and a semblance of beds. For our safety, we have spent every night in this makeshift refuge. 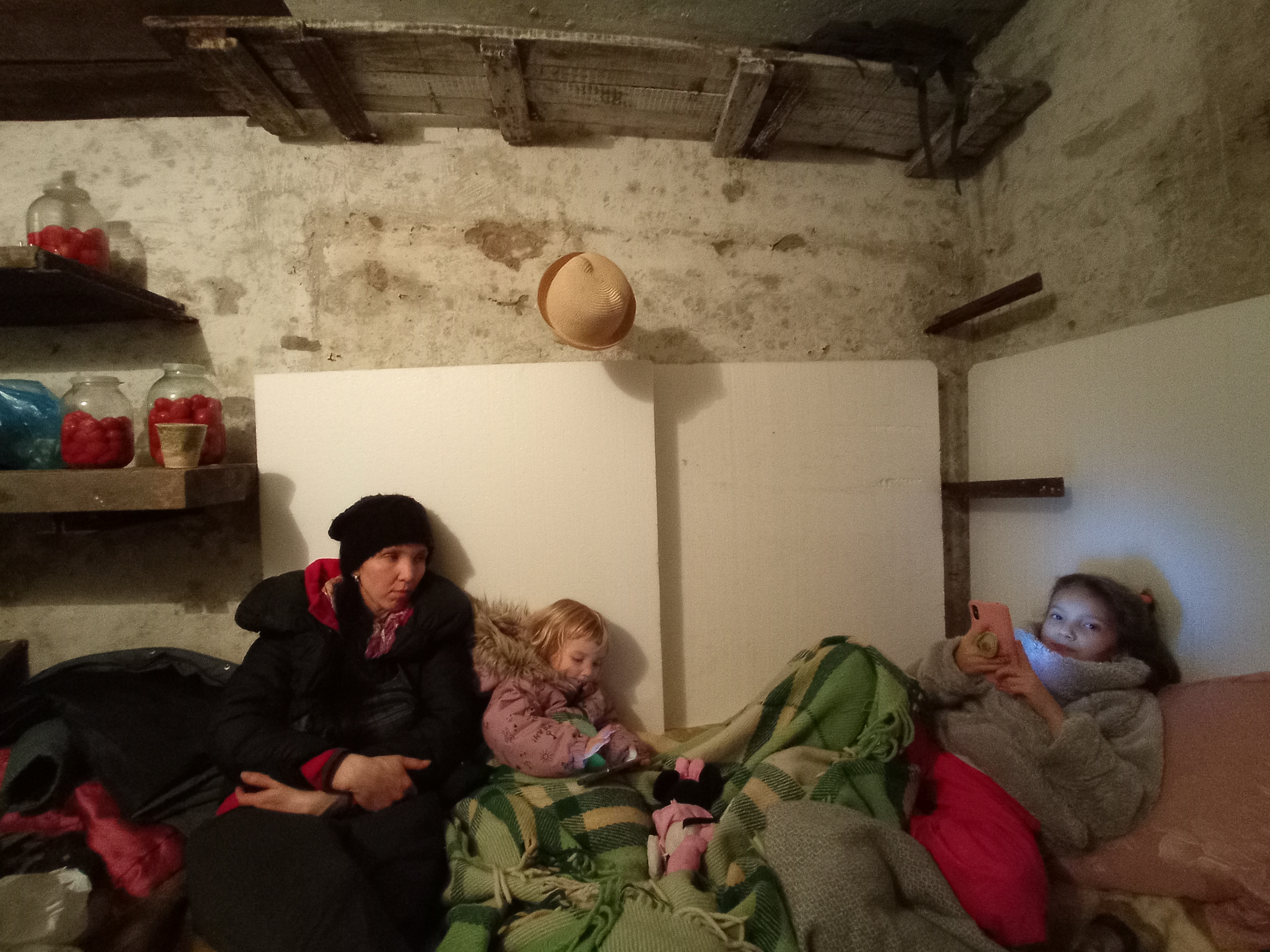 Though there is uncertainty, my children react normally to what has happened; we read books, draw, and play to pass the time. As parents and Ukrainian citizens, it is psychologically complex for us because all of our thoughts are about the end of the war. My main goal now is to protect them, to protect my family, to protect my children.

Some stores are open, but there is a product shortage. The shop lines are huge and daunting. There are few products in the store, but the shopkeepers are still working to make some things available. So far, we haven't experienced any significant problems with food shortages. I sometimes make trips to collect supplies in the city. However, the last time I went, there was an explosion somewhere on the edge of the town, and I saw people running out of their houses and hiding in a bomb shelter.

It's hard to describe the complex feelings of the Ukrainian people. I can only name horror, pain, and fear. Despite this, everyone is doing what they can. People pick up guns, protect their families, help the wounded, and this is genuine courage. The pathos of speeches about heroism always seemed phony to me, and the frequent banalities about peace on earth and justice sounded oversimplified. I don't think this way anymore. Now, when I see people's every-day courage, each simple phrase acquires deep meaning.

I have always thought that art cannot change the world. Nevertheless, I make art because it's my internal necessity. The creative process wasn't the way to express my political views or make a call to action. Issues that interested me were the transience of life, imperfection, impermanence, the nature of the self, and the beauty of materials. Over the years, my philosophy transformed, and I began to reflect on human beings and processes in society:

I try to integrate these ideas as motifs into my work, yet, and since the Russian invasion, I have come to a point where I cannot create any art. When I consider the incomprehensible connection of Russia's attack on Ukraine, it appears meaningless and useless.We don't know when and how this hell will end. We want to live in a country where everyone can freely create art, express our views, and be open to the world. 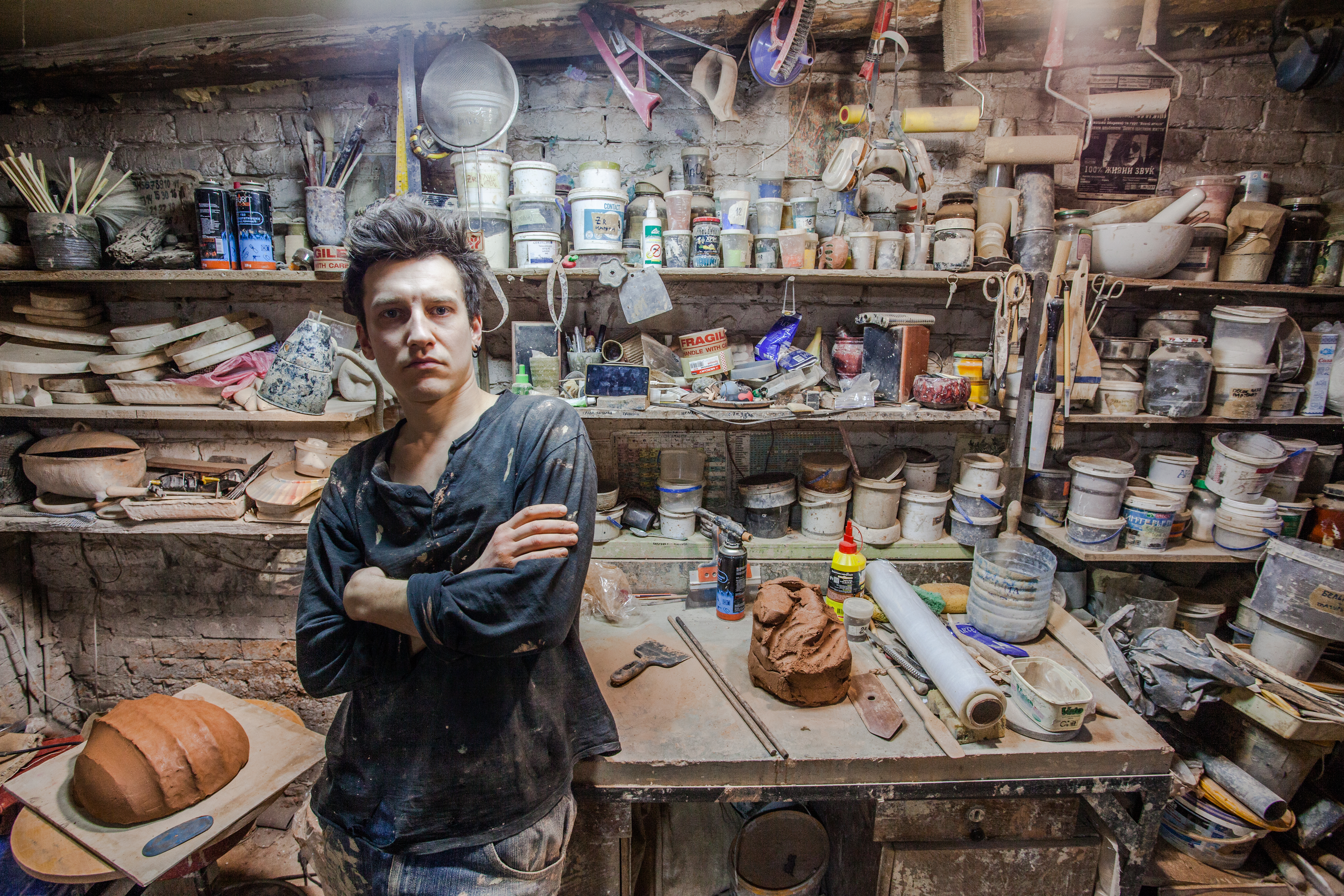 I have been an independent ceramics artist for twelve years. All these years, I have been earning a living exclusively by my creativity. I am engaged in both pottery and sculpture and do not limit myself. I exhibit with several galleries in Ukraine, participate in international exhibitions, and most of my work is sold abroad. It is important for me to see and contribute to the development of ceramics in a broader picture, in the global context. I have never experienced the influence of censorship in Ukraine. During the existence of the Union of Soviet Socialist Republics (USSR - Soviet Union), we were cut off from world cultural processes. Russia passes laws whereby a civilian statement or artistic expression that does not coincide with official policy is punishable by imprisonment. 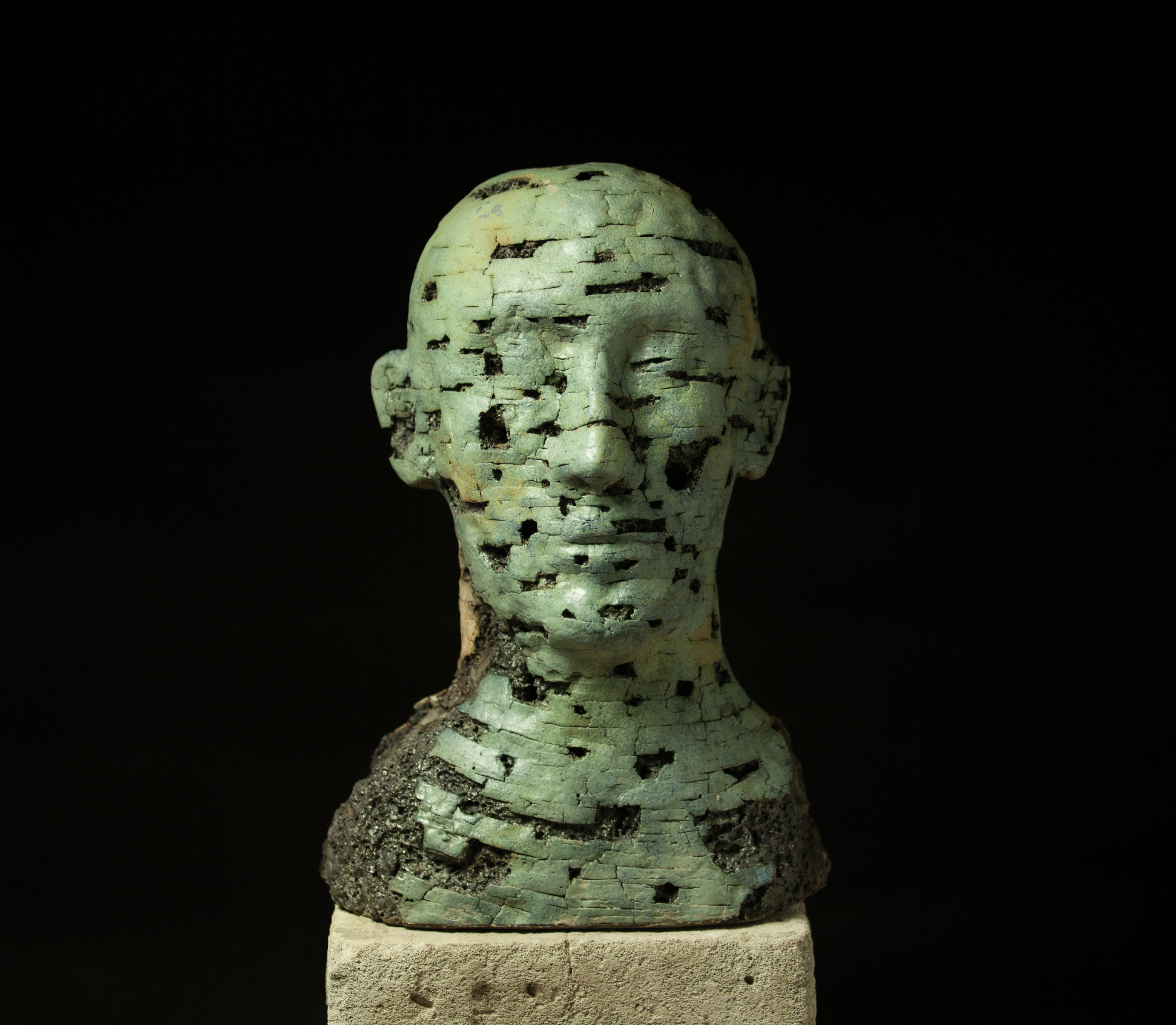 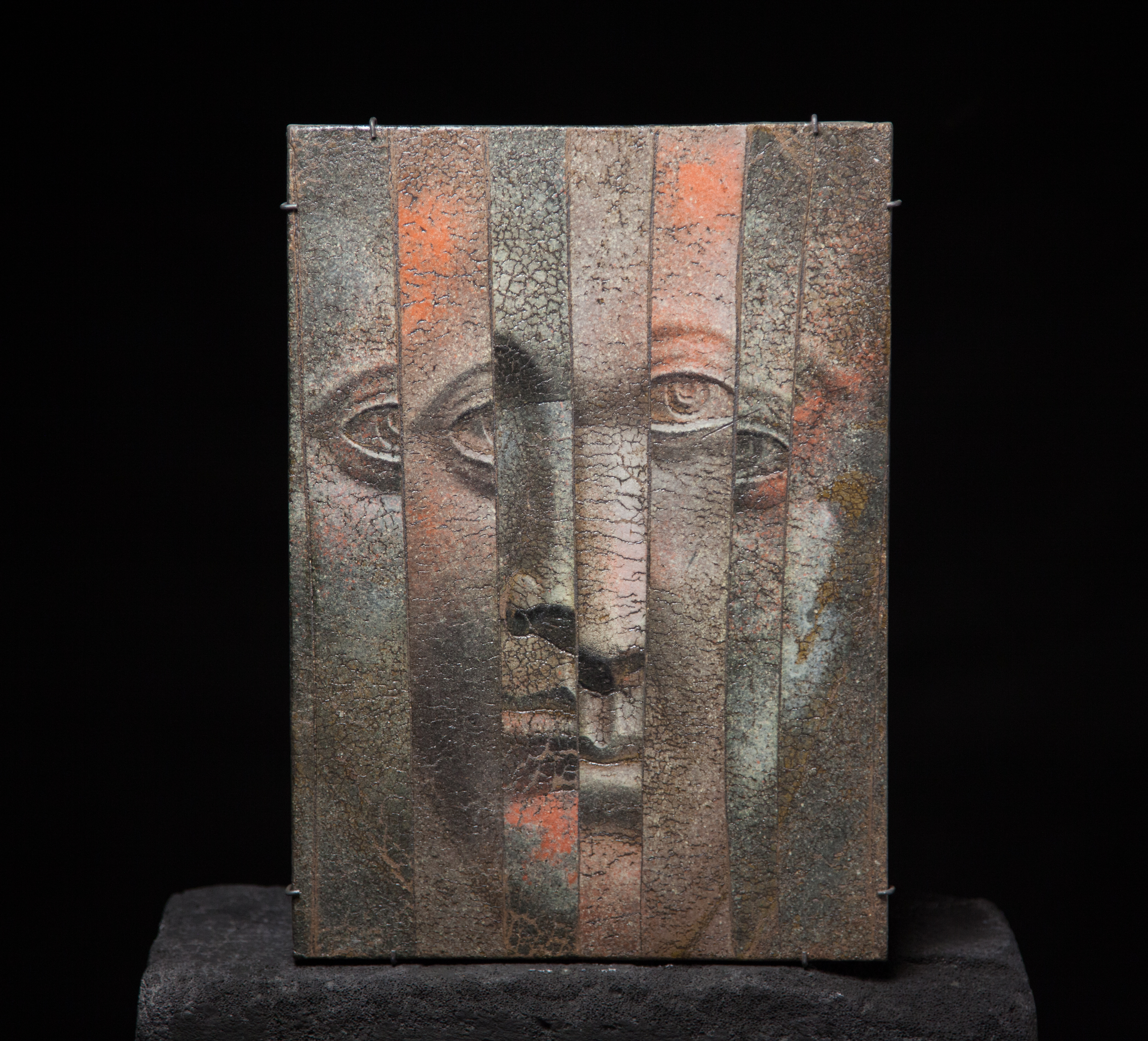 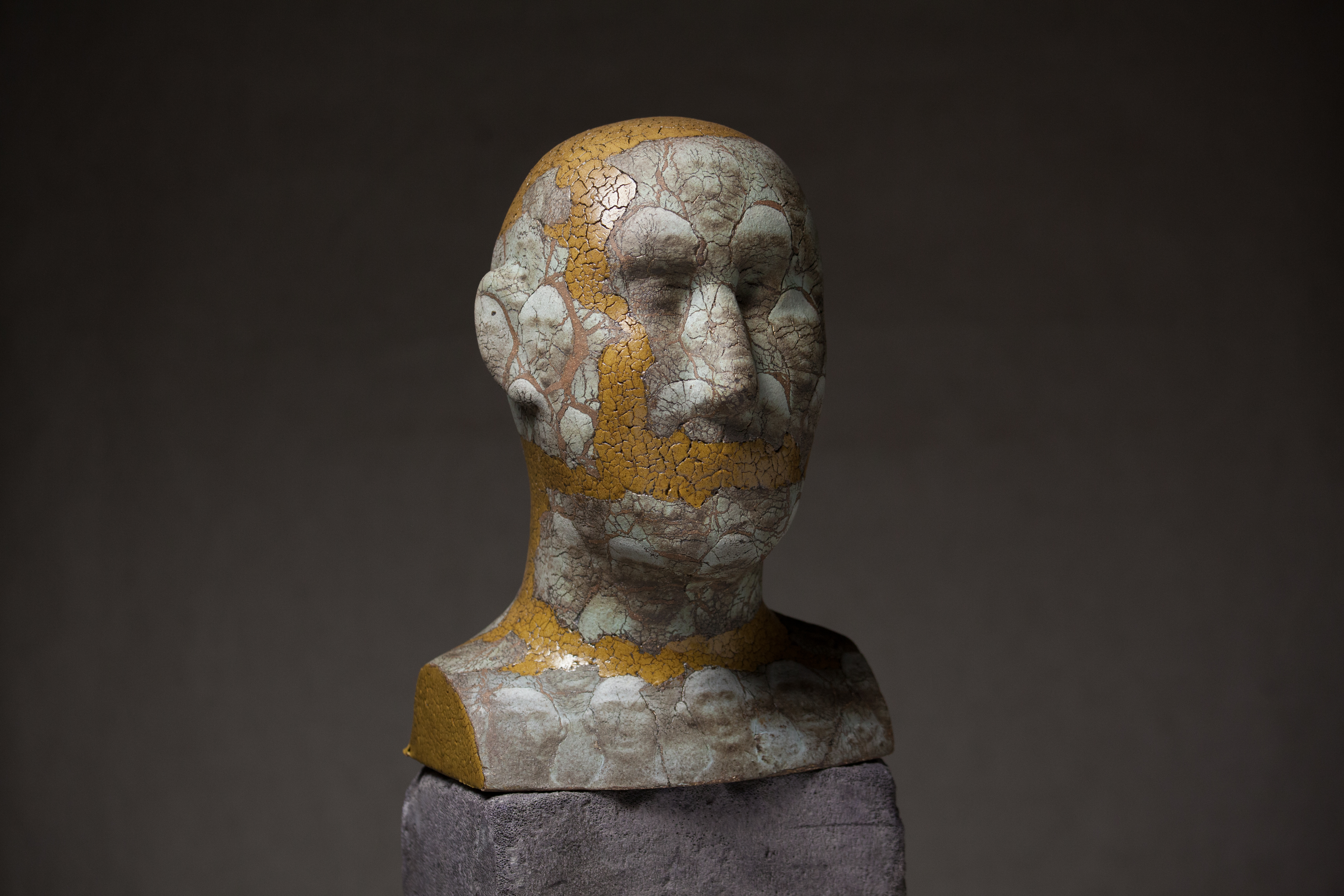 Through the ages, people of art and culture try to understand, to scrutinize, to analyze our world, with the hope of comprehending our history and spreading values of humanity. There are some artists for whom art is part of the socio-political struggle, and such art often causes resentment and resistance. In Ukraine, there are no prohibitions on speaking out or artistic expression. Rejection or criticism on the part of the audience or at the state level is all allowable and proportional. While Ukrainian cultural policy is far better than the latter USSR, there are many internal problems in Ukraine and I do not idealize our country. I believe more government attention should be paid to art and culture, and artists should be better protected socially. But in Ukraine, I can talk in detail about my work without fear of repercussion. The Russian invasion is a path of totalitarianism, a return to times of repression. Speaking out or expressing oneself creatively can have far-reaching consequences that are disproportionate to the artistic expression; Russia calls this liberation. The invasion has taken away the opportunity to even think about art; now all we think about is, "When will this war be over?"

Every day I start by calling my friends, many of whom are in apartments in Kharkiv, which is under Russian attack 24/7. Kharkiv is Ukraine's second-largest city. I've lived in the city for 10 years, and I studied at the Kharkiv State Academy of Design and Arts.The KSADA is one of the oldest artistic educational establishments in Ukraine. Now the Kharkiv city center is ruined and cultural centers like the KSADA  are being targeted. As far as I know, the KSADA buildings are not damaged at the moment. Kharkiv has been the hardest hit city and still proves to give the greatest resistance.

I have a second workshop at my parents' property; they live a few kilometers from me, in the village of Kochetok. There are kilns there, a wood kiln and electric one. On March 7th, in the evening, three shells hit the courtyard of their house, and the windows in the house were shattered. No physical harm done - All are alive and well.

During these days so many people from the whole world wrote to me and expressed their support. This kind of unity reinforces us and helps tremendously. I am sincerely grateful. I feel the power of simple supportive words and this gives us hope and faith.

Oleksandr Miroshnychenko wrote his article on March 6th, 2022. The text was translated by friends and family, and edited for clarity. Updates to Oleksandr’s experience will be linked with this article as information becomes available.

To follow Oleksandr on Instagram head to his page @ceramicsoul and for more ways to help Ukrainian citizens:

The Urgent Action Fund is helping support women, transgender, and nonbinary activists on the ground in and around Ukraine, by providing flexible funding, access to communication channels, and medical support.

Ukraine Support Pledge is a month-long fundraising initiative to help the people of Ukraine during this time of crisis. In response to requests to help the Artist Support Pledge community, we have set up a dedicated hashtag so funds can be sent directly to the Ukraine Crisis Relief Fund.

ARTISTS at RISK (AR) is a non-profit organization at the intersection of human rights and the arts. Since 2013 AR has been collaborating with arts non-profits and government funders to assist artists who are at risk politically and fleeing oppression and war in 26 locations in 19 countries globally. 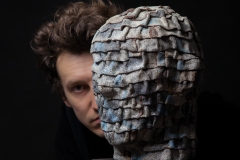 Oleksandr Miroshnychenko lives and works at his studio in Chuhuiv, a small village in the Kharkiv region of Ukraine. In 2001, he decided to become an artist after studying radiophysics at Karazin Kharkiv National University. Miroshnychenko subsequently enrolled at Kharkiv Artist College but was expelled after two years of education. The aspiring artist's first meeting with ceramics took place at the ceramic studio of Kharkiv State Academy in 2003. There he started working as an assistant, preparing materials for students and helping them to make their artwork. The head of the studio, instructor Volodimir Shapovalov, taught Miroshnychenko the technology and art of ceramics and clay. Miroshnychenko worked at the studio for seven years, and during that time, he studied ceramics and pottery intensively. The artist earned his bachelor's degree and master's degree through correspondence courses at the Kharkiv State Academy of Design and Arts.